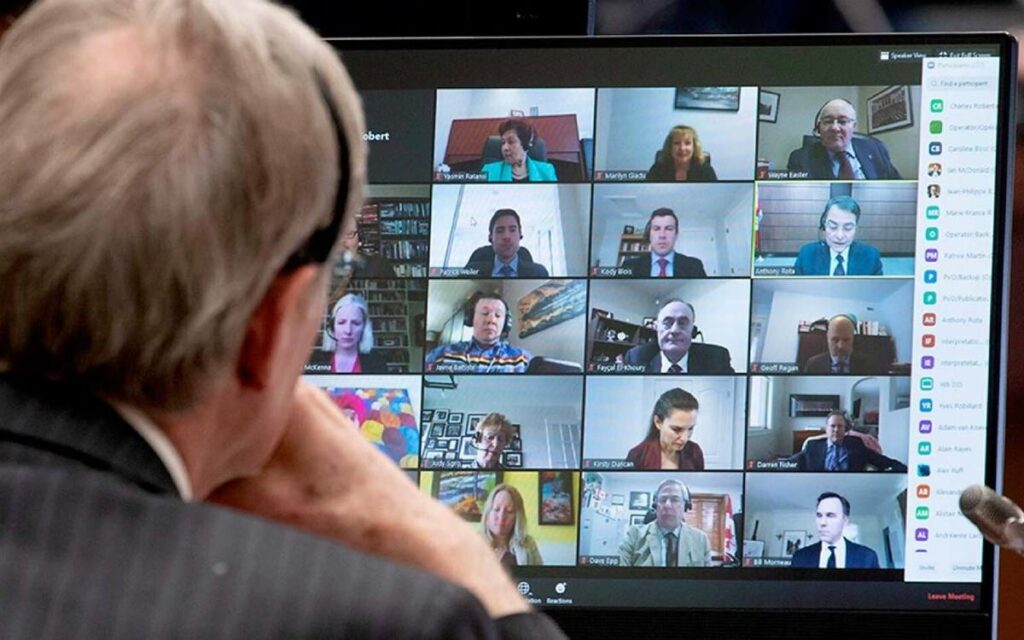 The reality of virtual parliament is that it is easy to dodge accountability. Something that this government in particular likes to do. Even before the pandemic, the government was looking for ways to reduce the time it spent facing scrutiny. Photo credit: The Canadian Press/Adrian Wyld

In Ottawa, MPs are back in their respective ridings and things are quiet around the parliamentary precinct. A major shift from the past month from the late nights, even longer debates, and the game of partisan politics on full display. Though this year was different from the regular end of parliament as not all parliamentarians were in Ottawa.

In pre-COVID times, Ottawa would be filled from Monday to Friday with MPs from across Canada to handle the nation’s business. MPs would pack up as early as they could to catch a flight back to the riding on Fridays and try to find the latest flight that would have them arrive in Ottawa by 9am on Monday to maximize their time with constituents. Not a lifestyle for everyone, but when you enter public life, you have an expectation of what you are signing up for. Not to mention politicians are well compensated for their work, have a staff to support them and receive a healthy pension for their retirement.

Like many workplaces during COVID, the House of Commons and Senate reshaped what an average day looks like. Instead of MPs flying in each week, they were able to take place in debate from home. Politicians could join Zoom calls to meet for Questions Period, attend their committees and even vote on legislation. As the pandemic continued, the need for a virtual parliament was evident.

But as more and more workplaces return to the office, the Liberal government is hesitant to have MPs back in town for in-person sittings.

A week before the House of Commons wrapped up for the summer, the Liberal government snuck in a debate around extending virtual parliament. The Conservatives were quick to express their disagreement with the practice of virtual parliament, while the NDP were just as quick to support the extension.

The core of the government’s argument to extend Zoom parliament was based on the fact that the pandemic has not actually ended; so, MPs should be able to take part in the safety of their homes instead of having to travel to Ottawa each week. There is some merit to this argument, but in typical Liberal fashion, they have been travelling domestically to sell Canadians on their recent budget and shore up support before an election. Just last week, the Prime Minister and several of his senior ministers were travelling internationally, meeting with other international leaders and not following the COVID precautions that they happily preach about while in Canada.

The reality of virtual parliament is that it is easy to dodge accountability. Something that this government in particular likes to do. Even before the pandemic, the government was looking for ways to reduce the time it spent facing scrutiny. Which is again fair, as it is easier to govern when there is no one to hold you accountable.

It is hard to get to know someone over Zoom. The person you meet on Zoom may not be the same person you get to meet when in person. For an MP, a large part of their job is relationship based and built upon meeting other MPs, ministers, and stakeholders. Pre-COVID, it was not uncommon for MPs to chat with ministers between votes or in the hallways about issues that their constituents were facing. Now, instead of having to be in the House, members of cabinet are whisked away by staff for virtual meetings in between votes.

An online parliament reinforces the idea that parliamentarians are just glorified parrots who will recite any line you put in front of them. Not holding in-person meetings removes the personal aspect that many politicians and good governments rely on. Having a pulse on the nation’s issues requires one to understand what the nation is thinking and coming together to find a solution, not sitting in a Lazy Boy reclining for Question Period.

By remaining in their local bubbles, parliamentarians are at risk of being caught in an echo chamber of their own ideas and will lose sight of truly national issues. It is noble of this government to make parliament more accessible and is something that all governments should thrive to do. It is important that Canada does not become more divisive. One way to do this is to have MPs back in Ottawa to find solutions to problems and not make more.