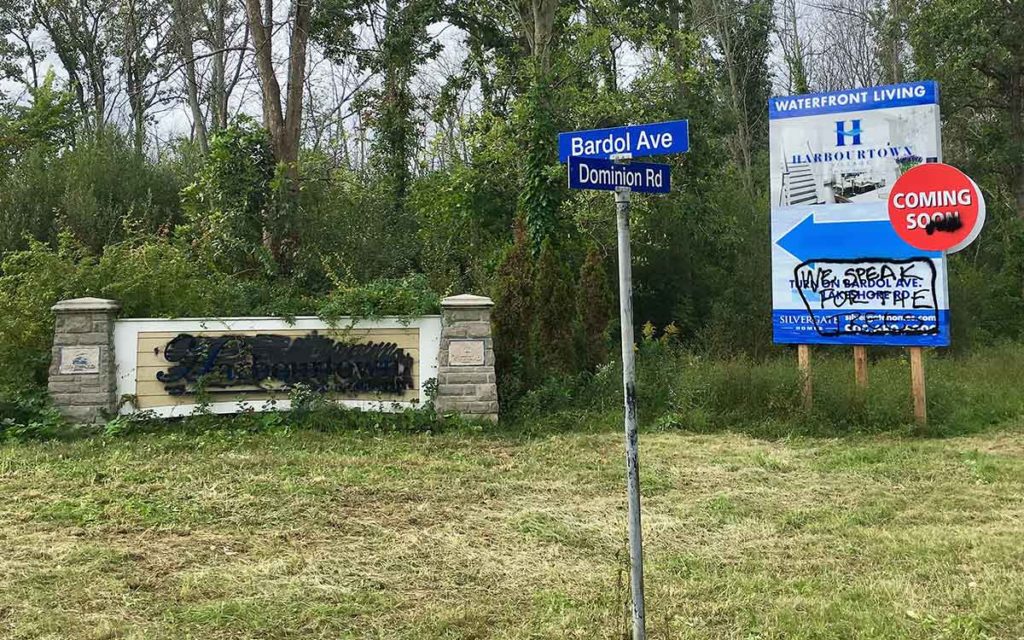 One of the signs vandalized at the site of a Fort Erie development project.

Crudely spray-painted in large black letters across the developer’s advertising signs and the Town’s own public notice postings were the words “WE ARE THE LORAX” and “WE SPEAK FOR THE TREES”.

The phrases refer to a children’s book (later turned into a TV special and movie) by Dr. Seuss. In the story, the Lorax is a personification of nature who advocates against environmental degradation. The Lorax proclaims: “I speak for the trees, for the trees have no tongues”.

The vandalism represents another ploy in a long line of maneuvers from protestors attempting to stop the Silvergate Homes development project.

The municipally approved plan will see the construction of close to 130 detached homes and townhouses, alongside a 10-storey 110-unit condominium (equipped with lights and architectural elements designed to mitigate its impact on migratory bird populations).

To date, none of the strategies used by the project’s adversaries have worked.

Harbourtown Village received the green light from the Town of Fort Erie in March of this year. Although the decision was appealed by opponents, the likelihood that Ontario’s Land Planning Appeal Tribunal (LPAT) will view the project to be in contravention of municipal planning rules is very low.

The land in question has been privately held for decades. Its owner, Fred Costabile, has agreed to give over seven acres of prime riverfront (amounting to around one-fifth of the entire property) to the Town; in turn, preserving much of the old growth forest in the development area.

Costabile even plans to beautify the massive stormwater management pond that has sat as an eyesore on the property for years; adding gazebos, benches, and native plantings.

“It doesn’t matter what you do”, said the land’s owner. “Certain individuals will find something to dispute”.

Unlike many developers who may simply push through with a project and ignore residents’ concerns, Costabile takes pride in listening to community members and gives back to the places where he works (as evidenced by his 2012 Niagara Entrepreneur of the Year award for community contribution).

“I believe the majority of people are good and actually support what we’re doing here”, said Costabile. “You can’t let a small minority keep you down”.

The residential development will result in significant financial gain for the Town and provide more much-needed housing options.

“I think Fred has shown immense patience and understanding throughout this entire ordeal”, said a local resident outside looking at the vandalized public notice sign. “I’m surprised it’s come to this”.

Another man walking his dog half-jokingly quipped: “We need to have night security out here!”

When contacted over the weekend, the Niagara Regional Police Service could not comment on if it had any information regarding who was behind the vandalism.