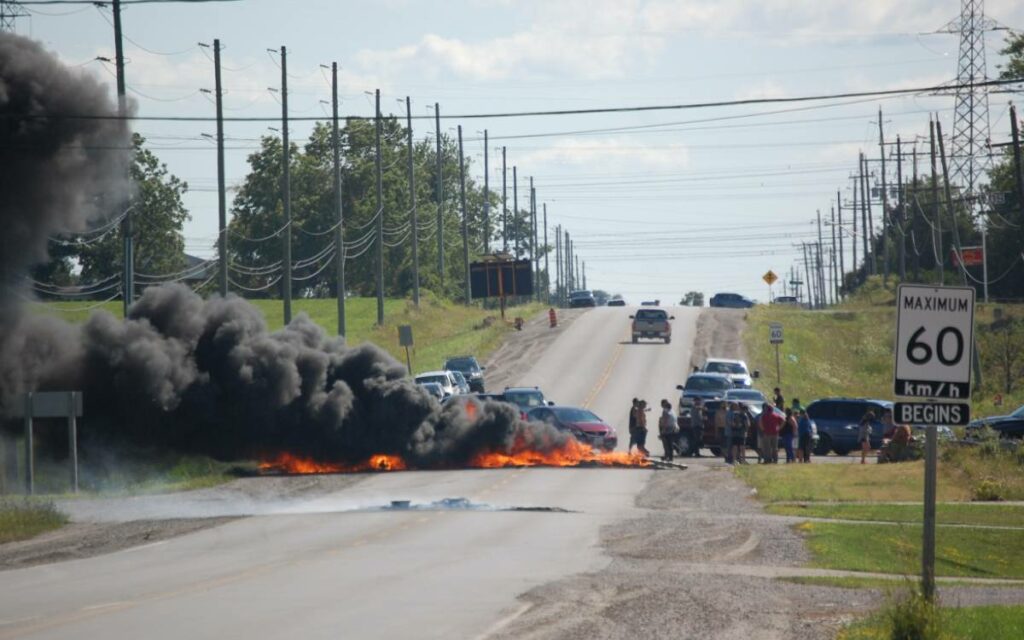 Protestors in Caledonia set tires on fire in protest of a housing development.

Renaissance polymath Leonardo de Vinci once aphorized “the greatest deception men suffer is from their own opinions.”

Let’s give the benefit of the doubt to the City of St. Catharines’ Anti-Racism Advisory Committee, and City Council. Perhaps their motive was simply to be instructively helpful to the citizens of Haldimand County, suggesting the fashion in which the Indigenous blockades at an urban development construction site in Caledonia should be handled. Communication, not confrontation. Talk, not tasers.

Mayor Walter Sendzik and his Council have talked a lot about support for First Nations. In fact, they have a Memorandum of Understanding (MoE) with the Niagara Native Centre, and commence every council meeting with a statement acknowledging the land occupied by the City is the traditional territory of the Haudenosaunee (Iroquois, or Six Nations) and Anishinaabe (Ojibway and Mississauga) tribes, and that our “standard of living is directly related to the resources and friendship of Indigenous peoples.”

At the opening of the Oct. 19 video-conferenced council meeting, Sendzik put his cards on the table, stating that “it’s important for communities like St. Catharines to articulate the importance of working with our Indigenous brothers and sisters, and getting to a place of better understanding, whether it be out on the East Coast as it relates to the lobster fishery, or in Caledonia. The use of force, and the use of violence and aggression, is never a good tool towards reconciliation.”

What came next was a recommendation put forward by the City’s Anti-Racism Advisory Committee, which was presented by Coucillor Greg Miller and endorsed unanimously by Council. The resolution was sent to the Haldimand County mayor and council, Haldimand Police Services Board, and Premier Doug Ford, urging that “police not be used to escalate the conflict, and instead use nation-to-nation negotiations and meaningful consultations to settle all claims.”

Haldimand mayor Ken Hewitt responded with an email to Sendzik, in which he said he felt undermined by the “offside” and “leftist” resolution, which “assumes that racism is driving the efforts by (me) and Council, the police, and the courts”… as they “attempt to resolve the illegal occupation” by the protestors.

Such are the pitfalls of dispensing unsolicited advice.

Saleh Waziruddin, Chair of the Anti-Racism Advisory Committee, asserted that the reason the Haldimand Police Services Board was included in the resolution was because a communiqué from the Board referred to the Caledonia protesters as “terrorists.” Waziruddin considered that rhetoric to represent a “dangerous escalation”, and referenced the Ipperwash Crisis 25 years ago in which native protestor Dudley George was killed by an OPP officer.

“There are residents in St. Catharines, and people who work in the City, who are at Caledonia out of solidarity with the protestors, and they could be vulnerable to police violence,” said Waiziruddin as a further explanation of his committee’s interest in the Caledonia dispute. He also noted that a St.Catharines-based Indigenous journalist, Karl Dockstader, had been arrested at the site. “Haldimand is right next door, and it would be wrong for St. Catharines to do nothing,” insisted Waziruddin.

Asked if he felt that the blockades in Caledonia, and similar Indigenous actions earlier this year such as the rolling blockades on Highway 401 near London and Kingston, and on the Via Rail tracks near Belleville, should be allowed to proceed unencumbered, Waziruddin responded, “It’s not in our committee’s mandate to take a position like that. But many people in Hamilton support the (Caledonia) protesters, despite the inconvenience of the blockades.”

Sendzik’s response to Hewitt (a three-term mayor in Haldimand County) via email acknowledged that “the motion would have been better if discussed within a time frame that would have permitted more understanding of the situation.” He insisted that the spirit of the motion was pure, and not tied to a leftist agenda.

When asked for comment, Mayor Sendzik’s office referred The Niagara Independent to Councillor Greg Miller who brought the motion to council. Miller did not respond to multiple requests for an interview.

Hewitt suggested that the more appropriate and respectful action for St. Catharines Council would have been to defer a vote on the motion until he and Sendzik could have had a conversation. He questioned whether, if First Nations protestors had taken over Montebello Park, local government would have been so tolerant.

With regard to the arrest of Karl Dockstader, Hewitt commented “this individual is playing a bit of a game with the public at large by saying that he was there reporting. He was actually there playing lacrosse, participating in activities with protestors on site. If you’re a reporter, if you’re there performing a function, that’s fair.  But if you’re involved beyond your duties, then you should be charged just the same as anyone else. Did it ever occur to ask why no other journalist that’s been at that site has been arrested?”

Hewitt believes that the mainstream media continues to portray the people at the blockades as peaceful protesters. “I’m not afraid to say what’s really going on, and what’s going on here is a lot less than peaceful. Through experience, they know how far to push. At what point do we take a measured approach? At what point do laws apply?,” said Hewitt.

“To those who believe that we’ve stolen this land (from Indigenous peoples), that all of this land is theirs, that we’re all squatters, I say ‘you lead the charge’…. show me that you really mean that and go over to Six Nations and say ‘here’s the title of my property, because I stole it from you’. Yeah, well….you know it’s not going to happen.”

Ontario Superior Judge R. John Harper ruled last Thursday to ban all barricades in Haldimand County, and limit access to the housing development in question. Clashes between barricade defenders and the OPP occurred several hours later, as the police moved to enforce the court injunction. Protestors accused the OPP of using rubber bullets and tasers, while the police responded that several cruisers were heavily damaged as the protest grew more violent, and the police used “appropriate, non-lethal force in response.”

Foxgate paid $4 million to purchase the property in 2016 from private owners. The land has been in private ownership since 1853. The claim being advanced by the protesters at Caledonia is that prior to 1853, the Crown should not have allowed the land to come under private ownership.

The deal to purchase the land was signed by Foxgate with the elected council of Six Nations. The protestors are claiming that there was not enough community consultation and that the Six Nations elected council doesn’t have a legitimate mandate to speak for Six Nations band members.

Foxgate gave $352,000 in cash and transferred 42 acres of land to Six Nations as part of an accommodation agreement. 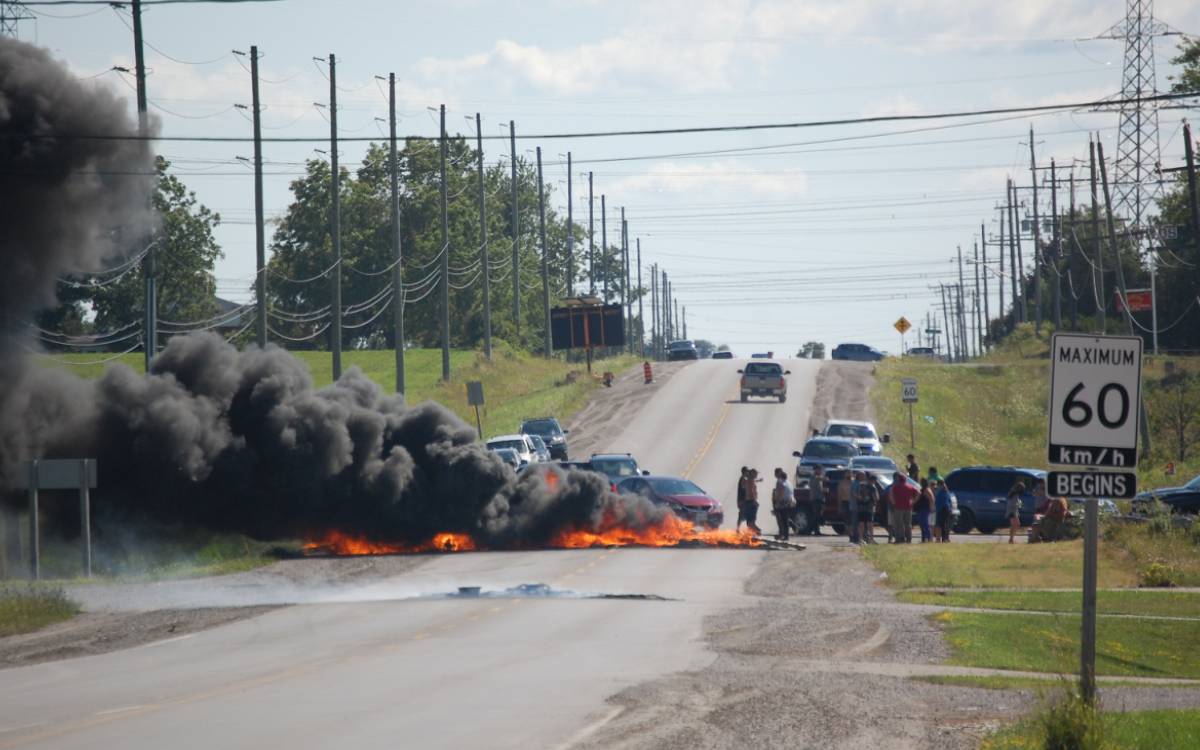