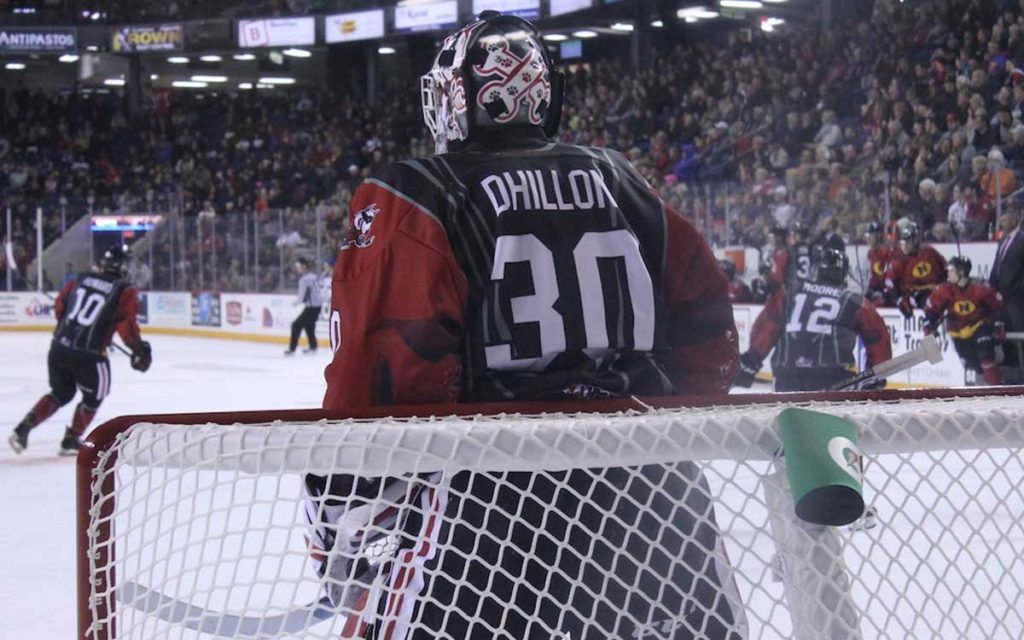 Niagara IceDogs goalie Stephen Dhillon keeps an eye on the play while wearing his superhero jersey Friday night in front of a sold-out crowd versus the Windsor Spitfires.

Not even a stretch of home cooked meals or an arena full of superheroes could help the IceDogs secure the maximum number of points over a rare, Wednesday, Thursday and Friday night stretch that saw the Dogs travel to Erie Wednesday and then return home for two games to close out the week. Niagara had an even rarer weekend off.

In Erie, the Otters scored three early goals in the opening period to carry a 3-0 lead into the first intermission. The second period was stronger for the IceDogs, getting better offensive opportunities and putting more shots on net, but they couldn’t beat the Erie goalie.  Akil Thomas broke the Otters’ shutout bid with his fourth of the season. Then, Matthew Philip made it a two-goal game, also with his fourth of the campaign. Things got interesting when Colton Incze was pulled for the extra attacker. Kirill Maksimov scored his fifth powerplay goal of the season to cut the Otters’ lead to one. In the final minute of the game, the ‘Dogs did all they could to score the equalizer but ultimately fell short, losing 4-3.

The Ottawa 67s were next up for the IceDogs who were bolstered by the return of defenseman Liam Ham. The highly skilled blueliner was out for a significant amount of time due to a lower body injury. Unfortunately for the hometown crowd, Ottawa went on to win a hard fought battle 3-2. Kirill Maksimov and Kyen Sopa scored for the Dogs. Head coach Billy Burke was impressed with how well Ham played after being off. “I thought he did a great job. You could tell he was still a little bit rusty but for game one with only one practice under his belt, I was really impressed with him.”

Ham admitted that it was a little overwhelming at times. “It was a long injury to comeback from, but I’m glad to be back,” he said after the game.

Friday night was Superhero night at the Meridian Centre in support of Family and Child Services (FACS) of Niagara. The IceDogs wore special superhero jerseys that were auctioned off after the game with proceeds benefiting FACS. Taking on the Dogs were the Windsor Spitfires. The sold-out crowd helped bolster their team to a 4-3 win bouncing back from two straight losses. Akil Thomas scored twice for Niagara while his teammate, Ben Jones, picked up his 150th Ontario Hockey League point.

Although happy with the win, Burke said he felt the team’s execution wasn’t where it needed to be. “The execution’s got to be better. It’s got to be dangerous. I thought in the second and third it got a lot better,” explained the head coach.

The IceDogs next home game is Wednesday, Oct. 24 versus the Peterborough Petes. It’s the annual Halloween game and fans are encouraged to wear their costumes. Tickets can be purchased at niagaraicedogs.net.