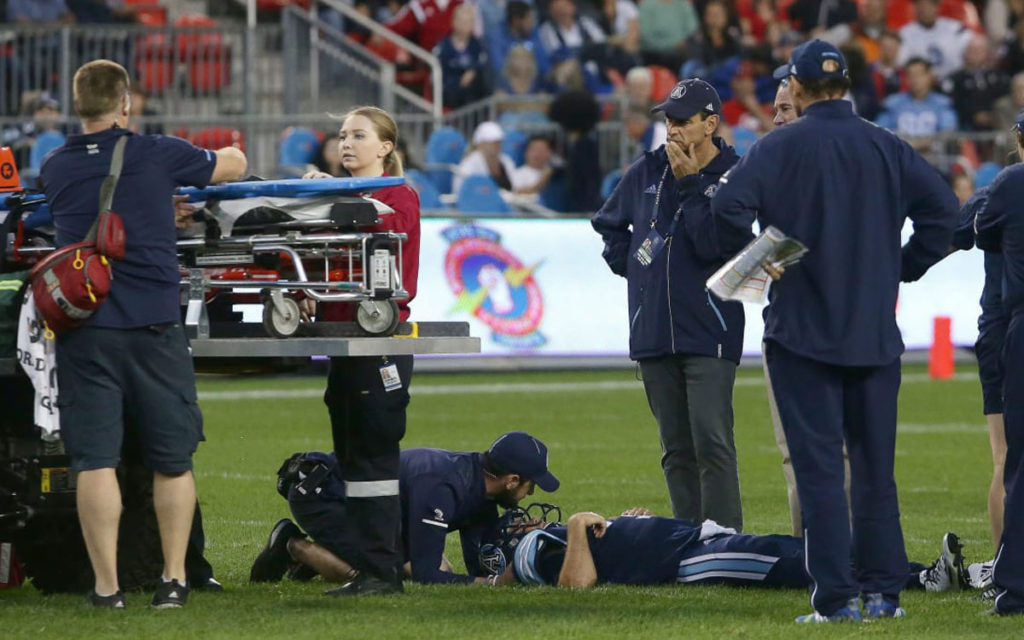 This past week, CFL fans across the country perhaps witnessed the last snap future Hall of Fame quarterback Ricky Ray might ever take. Slow of foot, scrambling outside the safety of his pocket, he was sandwiched between two Calgary Stampeder defenders. Crumpled to the turf, the Argonaut faithful released a collective sigh of panic and under their breath whispered “oh no, not again”. Oft-injured over the tenure of his Toronto career, watching him fitted with a neck brace, lifted onto the trainers cart, only galvanized the fears of his fans, this one included.

The prognosis for Ricky should not surprise anyone. In the end, the game of football passes us all by. It is not for the weak or injured; two reoccurring themes when you’re an athlete on the wrong side of 30. Some leave on their own terms, others are forced. And therein lies an athlete’s greatest fear, and forces me to suggest something so foreign and so unconventional, given the images viewers witnessed last Friday night. But the last thing Ricky Ray should do is retire, or at the very least, retire and leave the game on someone else’s terms. Let the armchair criticisms begin.

While I’m sure Ricky appreciates all the attention his health has garnered over the last week, given the choice, I’m sure it’s attention he never wanted nor asked for. That goes for the advice as well.

Professional football players play the sport for different reasons. In the face of growing evidence that high speed collisions aren’t all that good for your health — present or future — very few I suspect play for the paycheques. Most, like Ricky, play for the love of the game. And given the current climate pro football players live in, with the constant talk of permanent disabilities, CTE, ALS, Parkinson’s and a compromised quality of life, playing for anything else hardly makes sense.

Love is a powerful force and when used to motivate an athlete, the one intangible that will always separate winning from losing. Love for your sport, love for your teammates, love for your coaches and love for your fans. Love, it would seem, is the one defining quality that can bring a 300 pound offensive lineman to tears on a sideline. Love is the reason for that five-man end zone embrace after a game-winning touchdown. That Gatorade shower on the last Sunday in November? Cold, sticky love for that coach who hasn’t seen his family in eight months. And yes, it’s love that will make the decision to retire and walk away from the game, despite the risk of permanent disability, that much more difficult.

We often see that love on display in every football game. I suspect it’s that same love that keeps Ricky Ray coming back for more. Statistically, Ricky has missed 26 of his last 56 games due to injury — roughly 46 per cent of his appearances. And for that, the criticism and concern is surely warranted. It’s unfortunate those numbers will never tell the whole story.

The poet Goethe once wrote “The dangers of life are infinite, and among them is safety.” If he had watched Ricky play, you would think he was writing about his playing style. Within the stats, within the injuries, there is no metric in assessing an athlete’s passion, dedication and love. And it’s because of that statistical flaw, analyzing the fortunes of Ray will never be as simple as the arm chair quarterbacks make it out to be. No one should blame him and certainly no one should criticize him if he shrugs off his critics’ advice. Love, after all, is a noble and worthwhile cause.

While there is love in pro football, sadly there is no loyalty. A player’s career is nothing more than a value proposition. A player’s performance — their tackles, touchdowns and interceptions — monetized and placed on an accountant’s ledger. And when that player can no longer deliver, when it no longer makes business sense, the unnatural act of cutting, trading or disposing of human assets, suddenly becomes a very natural part of the game. It is this side of pro football that can be cruel. It is this side of pro football that should provide sober thought when entertaining decisions about continuing ones career; especially under the growing specter of health and injury concerns. “Loyalty to an unjust cause is a perversion of honour.”

The decision to end our love affair with the only career we’ve ever known is never easy, especially when any semblance of control has been wrestled from our grip. Walking away from a career that only six months earlier had you hoisting a Championship Grey Cup above your head, sometimes creates an emptiness that far too often leads to a troubled future. A life filled with regret, I would argue, will always present its own set of health challenges in the bigger picture of life.

But if football teaches us anything, if the victories and failures, the pleasure and the pain, reveal any sort of plan for a life after we’ve taken our last snap, it’s that love, in all the many forms we encounter it, will always guide our decisions. And it’s because of that truth, I won’t criticize or analyze whatever life changing decision Ricky Ray makes. I’d much rather just tell him “I love you, bro.”

Sandy Annunziata is a 2 time Grey Cup Champion and an Eastern Division All Star who played 11 seasons in the CFL. He is a lifelong resident of Niagara and current Niagara Regional Councillor for the Town of Fort Erie.