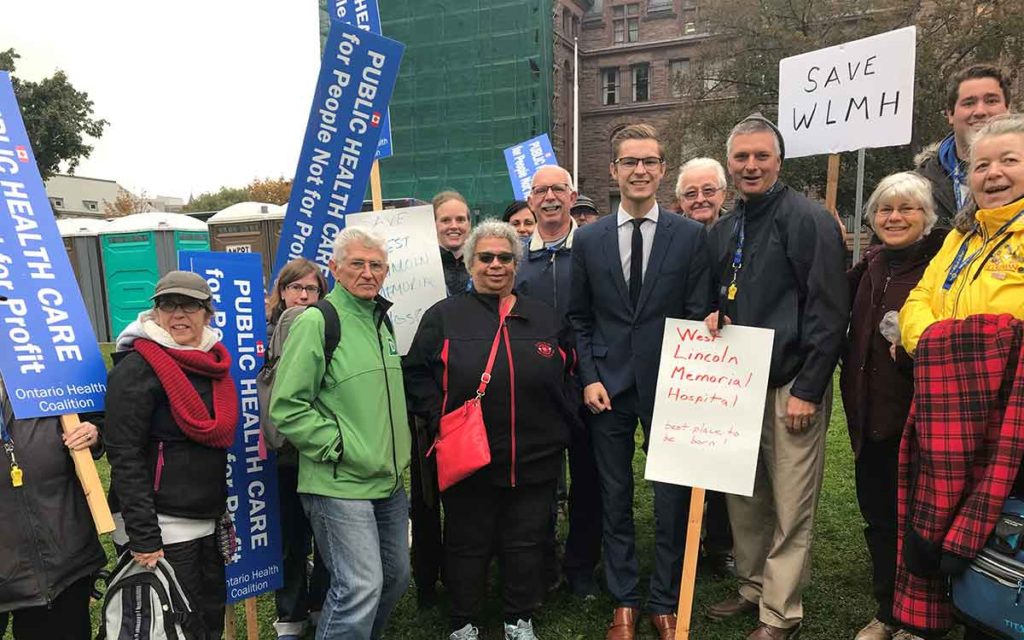 It’s been a struggle that has lasted more than two decades. It’s been full of false hope and promises by former governments and now residents and medical staff in West Niagara that rely on their West Lincoln Memorial Hospital (WLMH)  feel like the rug has been pulled out from under them.

Last week, in a surprise move, Hamilton Health Sciences, with which WLMH is site, announced they would be temporarily moving several services and clinics to Hamilton. These services include endoscopy, obstetrics and some surgical services. The problem is that the aging facility wasn’t up to code and so HHS says they were left with no choice but to put patient safety first and relocate the clinical services that the community and surrounding municipalities rely so heavily on.

The news shocked residents and staff alike. Dr. Gary Benson, the hospital’s former Medical Director, resigned over the decision, saying he and his colleagues were blindsided. “We felt HHS decision was rushed and they didn’t factor in all things. I felt strongly enough that I resigned,” he explained. But Dr. Benson’s frustration isn’t all directed at Hamilton Health Sciences. “HHS has done a lot of tremendously good things but this announcement came out of the blue with no warning.”

It also came as a surprise to local MPP Sam Oosterhoff and the Ministry of Health. Dr. Benson said Oosterhoff has been a great champion for moving the new build forward and now with fighting to keep these services in West Lincoln. “Sam has continued to work extremely hard for us.” Oosterhoff is frustrated noting that the previous Liberal government cancelled the new build project twice and had 15 years to make the proper renovations. He said he has spoken several times with the Hon. Christine Elliott, the Province’s Minister of Health, and said she is committed to finding a solution. “The Liberal government had one opportunity after another to make these improvements and start the new build and didn’t get it done,” said Oosterhoff.

After fighting just to keep its hospital doors open in the 1990s, citizens were given hope with promises of major renovations and even a new build. Back in 2005 the West Lincoln Hospital Board and management team received approval to proceed with planning for a new build and were given a grant to do so. Then in 2007 the then Liberal government introduced the Local Health Integration Networks or LHINs. The planning was put on hold until the Hamilton Niagara Haldimand Brant LHIN had a chance to review them. Finally in 2009 the LHIN approved the plans and optimism rose amongst residents and staff. “All the Health Minister at that time had to do was sign the paperwork,” said Dr. Benson. The hospital board was told we were number two on the list of major hospital capital projects in Ontario. “We were told the paperwork would be signed by the Minister by the end of 2011 and then in 2012 the project was cancelled.” It didn’t go unnoticed by the community that all of the hospital projects that were cancelled at that time, by the then Liberal government, were in ridings whose MPP was a Conservative.

Given the politics and complexity around new hospital builds the WLMH Board felt they needed more clout and began exploring options. They first spoke with officials at Joseph Brant Memorial Hospital in Burlington but eventually nothing came to fruition. Then, Hamilton Health Sciences approached with an offer to amalgamate. It seemed like a good fit and in 2014 the amalgamation was official. “It has been a good thing for us,” said Dr. Benson. “They have a capital planning division that has been of great help.”

HHS and WLMH went through a planning process that looked at the future of all HHS sites and at the end of it all they committed to rebuilding WLMH. The planning began once again, but with healthcare standards always evolving, it was felt the aging West Lincoln hospital did not have the proper infrastructure to do certain procedures. Things like proper air exchange and infection control needed major upgrades. A consultant pegged the cost at more than $8 million. That massive dollar figure triggered the pending move of services out of West Niagara and into Hamilton.

However, Dr. Benson and his colleagues say they don’t need to spend that kind of money. “We only need a five year fix until the new hospital is built not a 30 year fix,” he said. “We think we can do that while keeping patient safety the top priority and not having to spend $8 million.”

Dr. Benson says the services scheduled to be moved are crucial to the community. He said professionals like midwives, obstetricians and other physician specialists can’t just close down for three years and wait for their clinics to return. There is a fear that the town could lose a lot of good medical professionals as a result of this.

There is hope that the situation will be resolved. Dr. Benson said a consultant is putting together options that will be presented to the HHS board in the near future. “We feel we can achieve the same goals through other means. We are hopeful this will be resolved,” he said.