If Your Only Tool is a Hammer….. 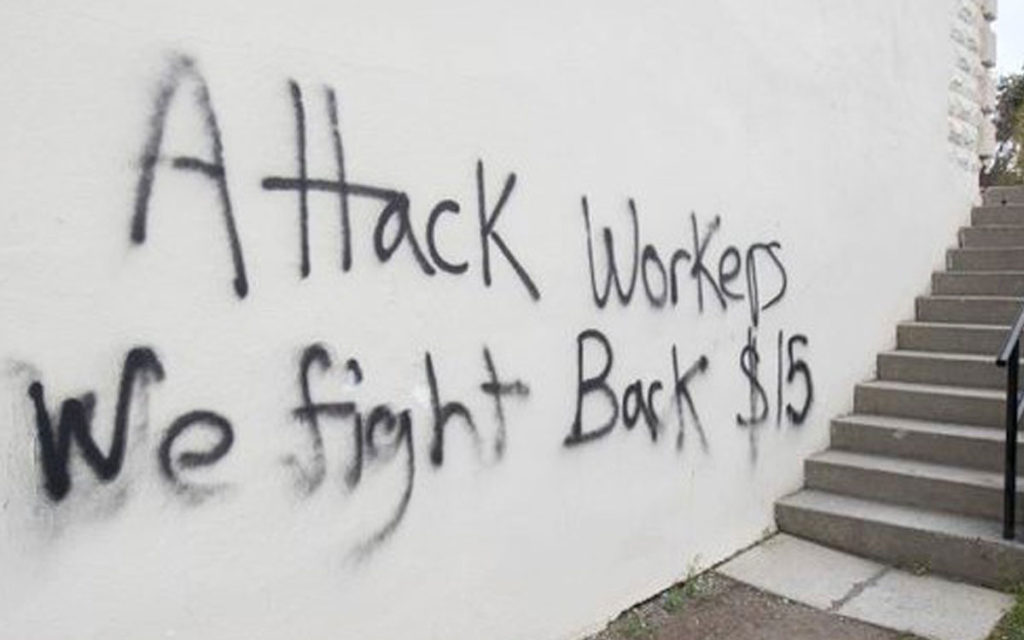 Graffiti on the side of MPP and Labour Minister Laurie Scott’s office building in Lindsay, Ont. Several windows were broken as well.

The unions and the rest of their left-leaning brethren have once again shown their true colours this week with violence, vandalism and death threats for Ontario conservative politicians.  This is nothing new for this gang, who frequently lower themselves to thuggery when they find themselves not getting their way.  It was behavior more befitting a two-year-old throwing a temper tantrum when denied some candy than supposed grown-ups dealing with policies enacted by a duly elected government.

This latest bozo eruption involved vandalizing Labour Minister Laurie Scott’s constituency office and leveling death threats against Premier Doug Ford, ostensibly for introducing the “Making Ontario Open for Business Act”, which reversed many of the extreme anti-business measures contained in the previous Liberal government’s Bill 148.  Of course, no one has claimed responsibility for these foolish and illegal acts. Deep down, bullies are always cowards, and if the perpetrators were truly committed to their point of view, they should not be hiding under the cloak of anonymity.

If you were to believe the dramatic and dishonest pronouncements of the forces opposing the Ford government’s actions, you would think that long-held worker rights were being stripped away, and we were being returned to some kind of feudal state where workers were enslaved by cruel and lawless employers.  In reality, the measures contained in Bill 148 have only been in place since the beginning of 2018.  Prior to the introduction of this Bill, workers’ rights were very well protected and had been for quite some time under different governments.   Despite being in power for almost 15 years, the previous Liberal government didn’t see fit to introduce such imbalanced, union-friendly legislation until very late in their tenure, at a point where their electoral defeat seemed almost certain.  Yet despite all of those years of Liberal rule without such policies in place, I can’t recall a single Liberal Premier or Minister receiving death threats or having their office trashed by anonymous labour hooligans.  It is therefore easy to conclude that this latest labour hissy fit has much more to do with the election of a government they don’t like than with the substance of any particular piece of labour legislation.

Unions have long used violence or the threat of violence to accomplish their goals.  For example, unions have convinced several Canadian provinces to implement “anti-scab” legislation to prevent businesses from being able to operate with replacement workers in the event of a strike by the union.  The major justification for such legislation is that without it the union would be likely to succumb to violence in the event that replacement workers were used in the place of unionized workers. What a ridiculous rationale! Violence is never acceptable or justified under any circumstances, and unions in the context of a strike are no exception.  The fact that governments have been convinced to pass anti-scab legislation to mollify unions threatening violence merely shows how weak and lacking in principles these governments really are to bow to what is essentially extortion.

That old saying  – “If your only tool is a hammer, everything looks like a nail” – has long been the credo of unions and the left in general.  Instead of the usual recourse of debate and discussion that most people use to express their displeasure, the left tends to resort to the lowest form of action in their embrace of thuggery and violence.  In this recent Ontario case, we can only hope that the perpetrators are quickly found and that their crimes are treated with exactly what they deserve – zero tolerance and the derision of the vast majority of Ontarians who are decent, moral and law-abiding citizens.