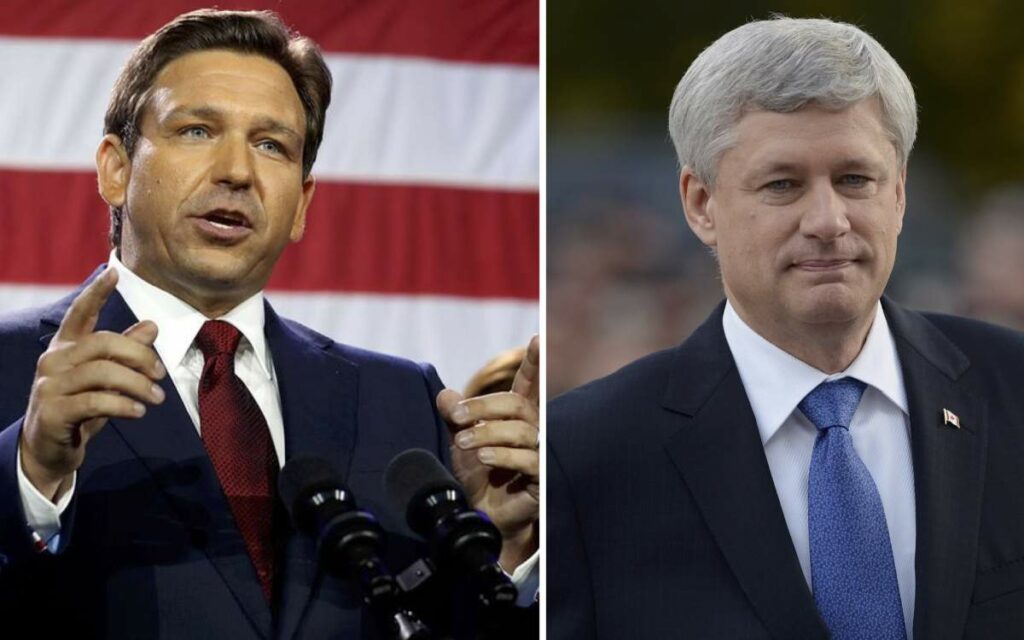 Calm and composed, driven by facts over feelings, and committed to sensible policy over all else, the current governor of Florida and Canada’s former prime minister certainly share a lot in common. Photo credit: Getty Images/Octavia Jones and The Canadian Press/Sean Kilpatrick

During the long national friendship between Canada and the United States, one of the most popular political parlour games compares Canadian leaders to American leaders. Because Canadians receive, hear, and see so much coverage of American politics, inevitably, the rising stars of Canadian politics are measured against so-called great American heads. Some of our prime ministers, like Pierre Trudeau, created such an original level of excitement that his coming became known as TRUDEAUMANIA.

When Mulroney, Diefenbaker, and later Stephen Harper won Conservative majorities, no adjective quite described their movements the way Trudeau’s had been characterized, despite voters’ enthusiastic desire for change. Perhaps the personality of the politician played into this, perhaps the press’ bias for the more liberal candidate, but whatever the explanation, the role of charisma in the success of Canadian political careers falls far short when contrasting them with American leaders. There may be a case, however, for likening an oncoming presidential candidate’s appeal to former Prime Minister Stephen Harper, regardless of both men’s lack of veritable charisma.

Harper won because he emanated competence and discipline. He did not govern appealing to emotion, feelings, or empathy. He displayed an ability to harness the facts of a situation, devise a solution, propose a way forward, and then act. He gathered together briefing books, spoke to advisors, absorbed as much information as he could about the issue, and drew conclusions consistent with his personal conservative philosophy. Those in government and the public who disagreed with him often criticized his decisions as heartless, mean-spirited, or lacking sensitivity. They rarely argued the facts. Harper knew the information better than them, he could outduel most based on raw data and won three national elections in a row, including a majority, marshaling these ideas into policy.

Transferring intention into policy, and then converting policy into power remains an art that few have achieved. One could argue that Ronald Reagan campaigned as the last president to argue philosophically on principle and win the presidency. Since then, most presidents have used charisma (Obama and Clinton), populism (Trump), or virtue (Carter, Bush 41 and 43, Biden) to justify their candidacies. America should prepare itself for a disciplined philosophical campaign in 2024 if Ron DeSantis, Governor of Florida, wins the nomination of the Republican Party.

DeSantis took a very narrow victory in 2018 and parleyed it into a stunning 20-point triumph in the state of Florida in 2022, once considered the most powerful swing state in America. His approach included the absorption of thick briefing books on the subjects that most concerned policy. When COVID hit, DeSantis quickly immersed himself in the science and while his conclusions did not line up with the CDC or Dr. Fauci, he worked hard to shelter the elderly, consistent with the story the numbers were telling. When the vaccines arrived, he pushed to get the elderly and front-line workers vaccinated, then get kids back in school. He stood accused of wanting to kill grandma, being uncaring, and bore the nickname, DeathSantis. Fortunately for him, and those who valued facts over a narrative, his policies proved to be more right than wrong.

When the pandemic eased after the Omicron wave, Florida had already endured the worst of its economic punishment. Unemployment numbers, never extremely high in the Sunshine State, fell to 2.6 per cent in November 2022, the lowest in America except for a handful of states, including the nation’s lowest at 2.2 per cent in Utah. As a reward, DeSantis not only carried Florida heavily, a Republican holds every state-wide office and both legislatures are Republican-controlled. DeSantis built this success on the back of governing effectively and efficiently.

Comparing him to Harper comes easily. Using a similar playbook, Harper eviscerated his opponents for close to a decade, hoisting them on their own petards, often shrugging off the opposition rather effortlessly. Applying facts to a problem confuses the Left. Usually, the progressive solution follows a utopian path, believing that if just enough people are educated, corrected, or informed they will act in the best interests of society and everything will improve. The resultant initiatives, programs, and new departments combine with the consequent shifts in policy and increase in manpower to create the modern state–layers of bureaucracy, reams of policy, sky-high government costs, and reduced liberty for the citizenry and the consequences of unintended and undesirable outcomes.

COVID supplied plenty of examples, but DeSantis also took on the Woke culture. In almost all Canadian and American jurisdictions some type of D(Diversity), E(Equity), and I(Inclusion) project exists. Laying aside the merit or justification of these programs, DeSantis quickly recognized the mischief manufactured when highly charged issues like racism, bigotry, misogyny, homophobia, and transphobia take over the governance priorities in a magistracy. Instead of surrendering his duly elected status, he strove to consult with the appointed leaders, inform himself, direct his cabinet to become familiar with the issues, and then make decisions based on the facts on the ground.

The result does not please the Left, but DeSantis believed himself and his government responsible to the citizens of Florida. They agreed and he won almost 60 per cent of the vote. No greater endorsement exists in the nation. Other governors, like Gavin Newsome in California, had equally impressive showings, but they won in 2018 with the same margin. No governor grew his number like DeSantis, and this speaks to the competent government leadership to which he gives expression.

Like Stephen Harper, DeSantis’ charisma level does not stir passion. His authority over the facts, his steady processing of data, his knowledge of the issues, and his ability to implement timely policy explain why he leads many polls as the preferred choice for the next Republican nominee in 2024. Many will detract from Stephen Harper, especially for mistakes he made late in government, in particular, the rather odd decision to create a “barbaric cultural practices” hotline. Nonetheless, Harper remains a sterling example of inciting personal responsibility.

When the facts trump the story, when statistics are used instead of anecdotes, and when policy reflects reality, not fantasy, the people receive a government that leads efficaciously, not indolently. Harper’s personal competency could not always be transferred to his lieutenants, but the driving theme of his administration stands in stark contrast to the present leader who spends much of his time virtue signaling and name-calling, employing schoolyard tactics to make himself popular and others villains.

We would do better with a fulsome debate of the issues instead of the constant maligning of motives practiced on the Left. America can ill afford another term of Joe Biden sleep-walking through his presidency, slandering opponents as he recently did, equating opposition to life-altering transgender operations as the same thing as hate crimes.

If Biden faces DeSantis, he will not have the luxury of hiding in his basement and allowing his opponent to self-destruct. As Harper smoked out the Liberals at the beginning of the century, DeSantis will force Biden to react to policy consequences, meaning Biden’s free ride on the “I’m not Trump” train will end. If DeSantis can make his case substantively, expect a long exile for the Democratic Party where they will need to re-evaluate their priorities and their practices. They would do well to recall that Reagan’s Revolution ushered in 12 years of Republican rule.

A DeSantis dynasty may be in the offing. Stay tuned.