It’s always about the money 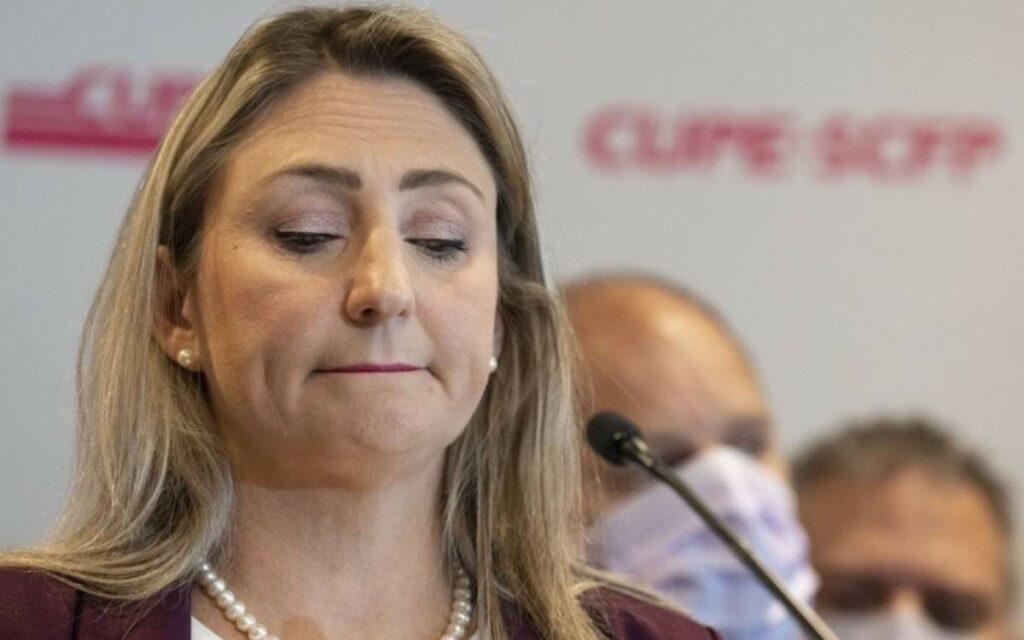 Despite claims to the contrary, when it comes to public sector labour negotiations in Ontario, it is, has been, and always will be precisely about the money. Pictured is president of CUPE’s Ontario School Board Council of Unions Laura Walton, Nov. 16, 2022. Photo credit: The Canadian Press/Chris Young

In the context of labour unrest in Ontario of late, we have repeatedly heard from union representatives that “it’s not about the money”.

In the early stages of the CUPE protests and wildcat strike by education workers, it was at least clear that it was initially all about the money when the union was asking for an outrageous 11.7 per cent increase annually for three years. The negotiations began with CUPE highlighting the case of the lowest-paid workers – many of whom were part-time and therefore actually had pretty decent compensation for part-time jobs with good benefits. Yet when the Ford government responded to the union’s focus on those earning less and offered to give them a larger percentage wage increase than those earning more, the union found that unacceptable and said all workers had to receive the same increase.

Now that the government has increased its offer to 3.6 per cent annually for three years, the union has once again changed its tack. While CUPE agreed that the latest wage offer was acceptable to them, they are now asking that the overall number of educational assistants, custodians, librarians and secretaries be increased and that an early childhood educator worker be present in all kindergarten classes, not only those that have 15 or more students. They are once again threatening a strike as early as next week if they don’t get their way.

Despite union claims that school boards are always looking to reduce the number of employees in the system, the facts show that Ontario has never had as many people working in the education sector, at greatly increased cost to taxpayers, even in the face of declining student enrollment.

This most recent demand for an increase in the total number of workers was accompanied by the union claim that “it’s not about the money” but rather about more resources that will better serve students. But, of course, it’s about the money. More workers means more dues paid to the union, so even though individual workers will not receive more, the union certainly will. And as far as better serving students goes, education outcomes continue to decline in Ontario despite all the additional monies spent.

In the course of the recent Metrolinx labour negotiations, the union involved also claimed that it wasn’t about the money. Key issues for the Amalgamated Transit Union (ATU) were to prevent the employer from contracting out work to outside companies and to stop paying drivers on mid-shift layovers at half-time pay. The main reason an employer would contract out work is to save money, and it is very likely it would contract out to a non-unionized company, therefore denying revenue to the union. The same outcome would result from paying drivers less. So once again, it really is all about the money.

What is most surprising in these situations is that anyone actually believes the unions’ claims. In the education case, Ontario students and parents have been disrupted on a regular basis by strikes and other job actions by various groups of teachers or other education workers. This has happened no matter which government is in power.

In the course of the current dispute between CUPE and the Ford government, public opinion polls taken in the early stages of the negotiations indicated that the majority of the general public was surprisingly supportive of the union. Some of the reason for this could have been because the government threatened the drastic step of using the Notwithstanding Clause without negotiations even really getting off the ground.

After the government took the Notwithstanding Clause off the table and made a more generous offer to the union, it seems that public opinion has shifted as recent polls show more support for the government position. Unfortunately, the ongoing extortion of taxpayers by public sector unions will continue until the public finally gets fed up and no longer backs up the unions. Another option would be for the Ontario government to open up the education market to other players such as charter schools, as provinces such as Alberta have done with great success. In the absence of such changes, however, taxpayers will remain at the mercy of the unions.

Public sector unions in Canada have been very successful in padding their own coffers at the expense of private sector taxpayers, and convincing those same taxpayers and governments of all political stripes that this is somehow acceptable. And when they claim it’s not about the money, you can be sure that’s all it’s really about.