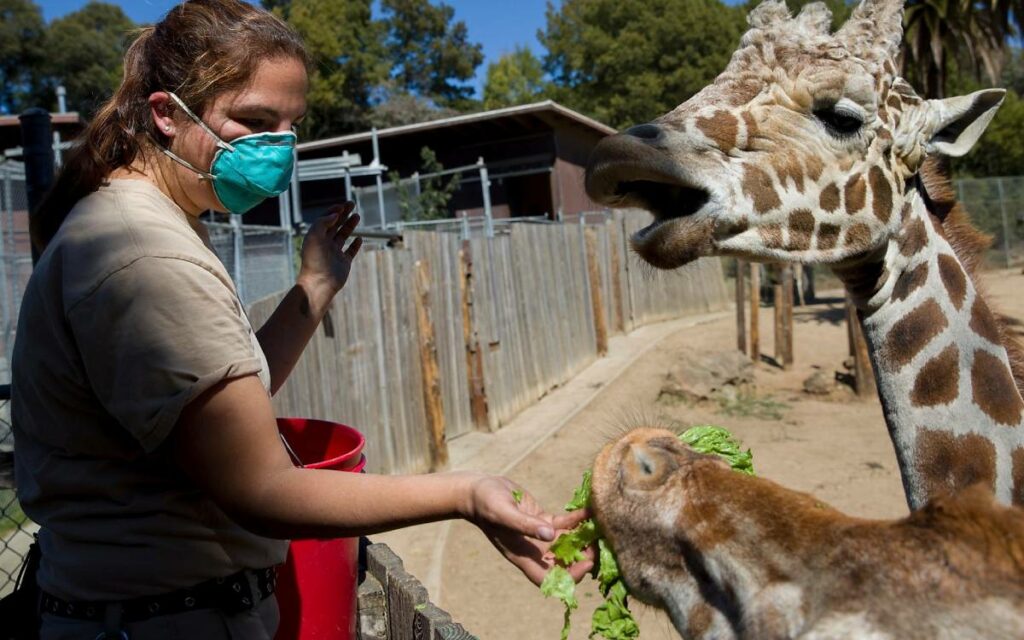 The Oakland Zoo will begin vaccinating at risk animals, as soon as June, against COVID-19.

According to ABC news the Oakland Zoo will begin vaccinating at risk animals, as soon as June, against COVID-19.

Primates and “large cats” will be the first such inmates of the zoo to receive the life saving vaccines. According to ABC news, “Due to the nature of primate communities, an outbreak could be devastating, leaving them with a high likelihood of quick spread.”

I realize it is April Fools Day as I write this, however, this is no joke. Animals in the Oakland Zoo are actually going to start getting vaccines as early as June according to the American Broadcasting Corporation, more commonly known as ABC.

Apropos of nothing, 40 per cent of the federal Liberal Government-promised vaccines for the province of Ontario, did not arrive in March. Nearly 800,000 potentially life and economy saving doses of vaccines just didn’t show up.

No reasons, no rationale, no planning documents, no targeting papers or forecasts of any reliable nature regarding vaccines. Instead, 40 per cent of Justin Trudeau’s promised vaccines just didn’t show up.

Local Niagara media keep asking why a vaccine supply originally destined for this region was diverted last minute to somewhere else. Well, maybe having 40 per cent of promised vaccine not showing up had something to do with provincial governments having to make the difficult choice of what areas of the province will get vaccine and what areas won’t.

In all fairness, delivering on 60 per cent is about 50 per cent higher than usual for Liberal promises. Still, this isn’t $2,000 to buy a canoe like Justin Trudeau promised during the last election – September 26, 2019 to be exact.

No this is promised vaccines that will potentially stop the loss of life of loved ones, family, friends, neighbours and other Canadians who once believed in his government. COVID-19 doesn’t only go after Conservatives, NDPers, the Bloc or Green Party Members even Liberals and those who are politically agnostic are dying too.

In fact, at present course, by the time the primates in the Oakland Zoo are getting vaccinated, more than 25,000 Canadians will have died from Covid-19 and resulting complications.

The first wave took governments of all stripes and levels by complete surprise. Yes there were lots of indications; there was also certain medical professionals that said the virus wasn’t going to be a problem for Canada.

Regardless, fool me once shame on you. Well then there was the second wave with new variants and still no rapid testing available, wide-open airports and land borders. Yes, if you wanted to you could cross land-borders between Canada and the United States.

You could cross these borders with a “please stay home” from our federal government and little else. This despite Bill Blair, Minister of Public Safety and Emergency Preparedness, saying we had the most restrictive borders in the world.

He said this while there was quorum for Canadian politicians in the Caribbean. Two weeks after his comments the federal government was finally locking down airports. Well, we were unprepared and fooled twice.

There was no way our governments could get fooled by a third wave right? Well yes they did and the reason is there is only one way out of this.

And presently Canada, one of the best-educated, wealthiest and modern nations in the world, sits at number 62 in percentage of its citizens vaccinated. A country that places “health care” at the top of issues in every single election is facing economic ruin for tens, perhaps hundreds, of thousands of its citizens because of failure to provide health care.

What is even worse, a study by the Dalla Lana School of Public Health at University of Toronto, that right-wing conservative think tank, found it will be 2022 before any province in Canada vaccinates 70 per cent of its citizens.

That means a majority of the citizens of Canada will not be vaccinated by September as Justin Trudeau and his sycophants continue to promise. No province in the country will hit the target promised by the federal Liberal government.

Two provinces, Nova Scotia and Newfoundland, run by the only two Liberal provincial governments in Canada, will reach their targets in March and August respectively. This according to the University of Toronto, one of the most leftist schools in the entire country.

Simply put, at present course there will be a fourth and fifth wave of economy and loved ones killing Covid-19 before this is all over. And the shut down announced by Premier Doug Ford and the Progressive Conservative government of Ontario will in all likelihood not be the last one.

This is all the fault of Justin Trudeau who spent the summer of 2020, on vacation planning an election, shutting down committees looking into his scandals and eventually shutting down the entire government. He gave himself a raise yesterday by the way.

All of this while the worst leader of any country of our lives directed his government to go at breakneck speeds to get a vaccine. Yes, Justin Trudeau was bested by Donald Trump when it comes to vaccine production and delivery plans. That is not an opinion, that is fact and I don’t like it any more than you do.

There is an old saying and it is a very good one, ‘people get the government they deserve’.

Sadly, many people I know and I am sure you know, will lose their livelihoods and possibly their lives. This will be happening just as everything in Canada becomes more expensive, for Justin Trudeau didn’t just give himself a raise yesterday, he raised taxes on every single thing we buy.

This is what is known as a perfect storm for seafaring people or a black swan for those in finance.

The only cure is in fact, the cure. And thanks to our federal government, animals in a zoo have a better chance of getting it by September than do Canadians.