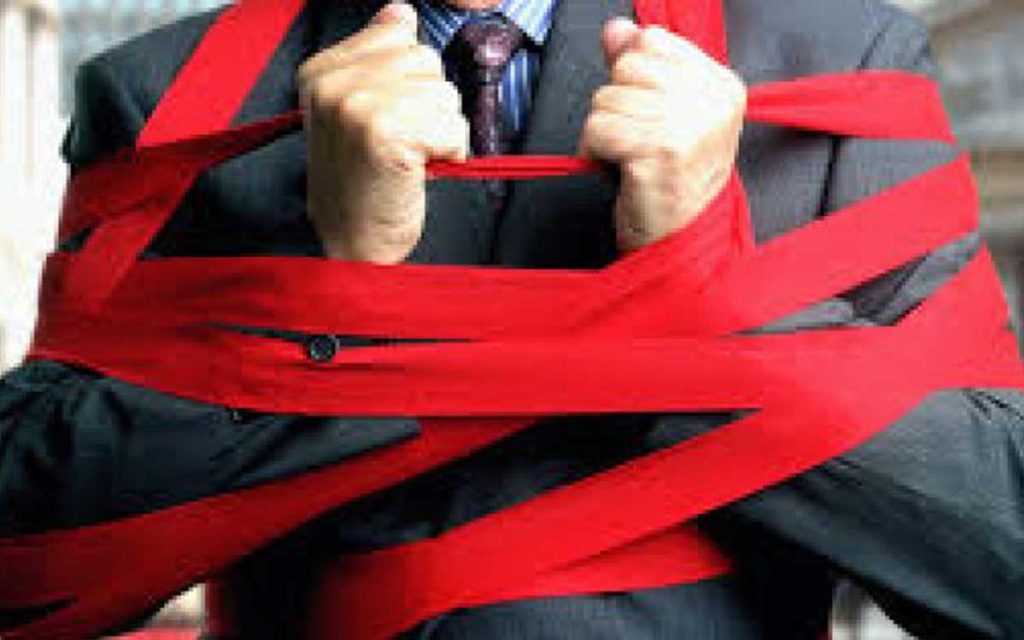 One of the issues for business that never gets the attention it deserves is that of “red tape”, defined as the plethora of rules, regulations and other requirements that government imposes on businesses and, in turn, on individual citizens.  Despite the fact that taxes get most of the attention in discussions of competitiveness – and taxation is a very important issue for businesses – surveys by business groups such as the Canadian Federation of Independent Business, Chambers of Commerce and others show that the perennial number two issue after taxes is red tape.  And red tape is far from just a nuisance, which it surely is, but also imposes substantial costs on an economy and is a major drag on competitiveness.

Of course, sensible regulation is essential and an important part of the job of any government.  But far too much regulation comes about not to accomplish reasonable things such as ensure safety in workplaces, establish and enforce proper standards in important professions or oversee a safe food supply, for example.  Instead, much regulation comes about as a result of one special interest group or another lobbying government to put in place measures to protect them from competitors or from overly ambitious governments engaging in “regulatory creep” as they encroach on areas that have no need for government oversight or that another level of government is already dealing with effectively.

In recent years, Ontario has been regularly identified as the province with the costliest burden of red tape in Canada, with a total of over 380,000 regulations on business, and counting.  To their credit, the Ford government has made reducing red tape a priority as a part of its “Open for Business” initiative, and is currently conducting consultations to solicit views on the best and most effective ways to streamline red tape while ensuring proper safeguards are maintained.  They have already acted in some obvious areas, such as the winding-down of the College of Trades, which was a wholly unnecessary and costly bureaucracy that merely added to the red tape burden with no upside for businesses or employees.

The jury is still out on whether the Ford government will be effective in its efforts to truly reduce the red tape burden and give a boost to provincial competitiveness.  Many governments in Ontario and elsewhere have embarked on similar initiatives, with mixed success.  There are many elements that fight back hard against any such efforts, including an entrenched government bureaucracy that resists change and the many groups who benefit from the status quo.  In addition, it is an arduous exercise, often likened to a massive game of “whack-a-mole”, where once a government makes some progress in reducing ineffective regulation in one area they find their efforts negated by regulatory growth in other areas.

There have been successful red tape reduction exercises in Canada and elsewhere, and they have a number of factors in common.  A vital first step in the process is measurement – completing an accurate inventory of the body of existing regulation.  The second step is the elimination or streamlining of those regulations that do not accomplish anything substantive or that can be applied more cost-effectively.  For instance, perhaps a requirement that a form needs to be submitted by businesses monthly can be changed to quarterly with no negative effects.  Finally, the third step is to establish a system of regular monitoring and assessment that will continue after the initial process is completed.  Too many red tape reduction exercises that were successful at the outset ultimately failed because they did not set up an ongoing oversight body with sufficient authority to ensure that progress continued and there was no backsliding once other priorities captured the government’s attention.

Reducing Ontario’s red tape burden is a vital component of making the province competitive again, but it is a complex and arduous undertaking.    The need for action in this area has been made more urgent by what is taking place in the US, where the Trump administration has made considerable progress in reducing that country’s red tape overload.  Let’s hope the Ford government can achieve success with their efforts, as the benefits to the province’s future economic prospects will be substantial and enduring.