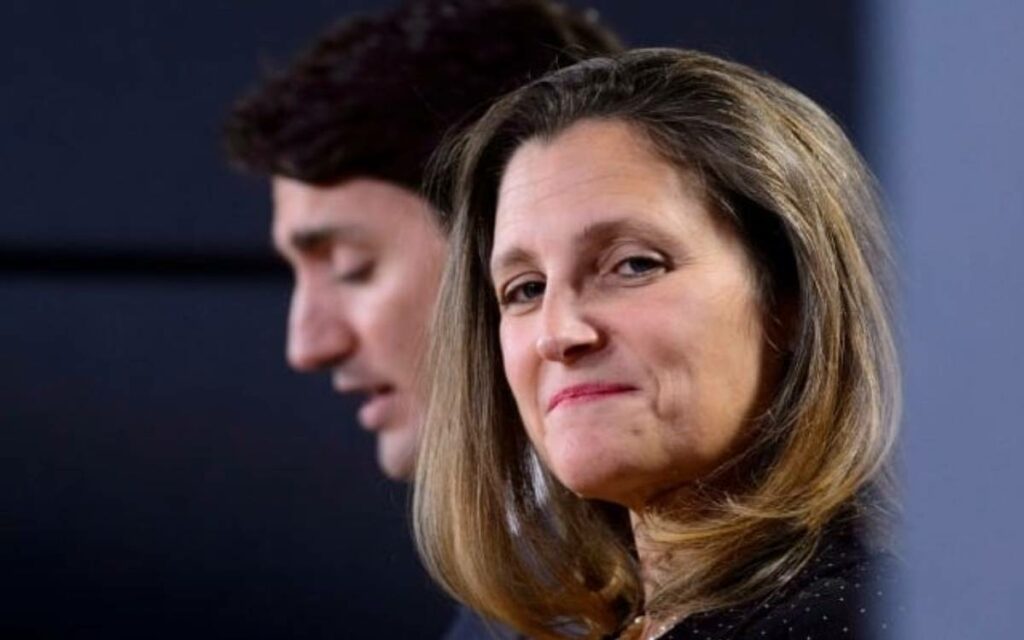 Chrystia Freeland, with Justin Trudeau in the background. Over the weekend, Freeland posted a doctored video to Twitter that the platform flagged as “manipulated media”. Photo credit: The Canadian Press/Sean Kilpatrick

The parties are in full campaign mode and with the Conservatives polling higher than predicted, the Liberals are pulling every card they have. Within the first week of their campaign, they have attempted to divide Canadians and paint the Conservatives in a terrible light by using wedge issues such as abortion, guns, and healthcare. Is it working?

The Liberals are in a dangerous spot right now, especially with the recent social media scandal which occurred over the weekend. Liberal candidate Chrystia Freeland was flagged by Twitter for posting a video deemed “manipulated media” by Twitter. The clip in question featured an interview Erin O’Toole did during his leadership bid in 2020 where he discussed healthcare.

The Liberals are in hot water over the post because the video was cut and manipulated numerous times to edit O’Toole in a way which makes him appear to promote for-profit healthcare as a superior alternative to Canada’s current single-payer system.

The Niagara Independent’s very own Kate Harrison was the one who originally posed the question to O’Toole and was surprised to see the changes made to the video. She voiced her frustration publicly on Twitter, saying, “as the person who asked the question, I’m disappointed to see the video was manipulated to exclude important context.” She then posted the full video for context, demonstrating that the Liberals had deceptively edited out the portion of the footage where Erin O’Toole delineates that “we need to ensure universal access remains paramount.”

In the original interview, Harrison asked if he would consider “the provision of private-for-profit and non-profit healthcare options inside of universal coverage.” O’Toole clearly responded by saying that he supports “finding public-private synergies” and ensuring that “universal healthcare remains paramount.” Quite the difference from the manipulated video.

Many Twitter users joined Harrison in the fight for accountability and transparency and helped bring forward the facts. Niagara native Laryssa Waler uploaded the original transcript of the interview and highlighted word for word the quotes by Erin O’Toole that the Liberal Party spliced out.

This is one of the Liberals’ favourite tactics: painting Conservatives as anti-public healthcare, attempting to drive voters to vote for them. Is the hope that Canadians will naively believe their messaging and not dare check the facts? Not this time. Kate Harrison initiated the path to truth with her courageous tweet revealing that the manipulated video was simply a part of a desperate attempt at a smear campaign. Twitter (the company) agreed.

Late Sunday evening, Twitter flagged the original tweet made by candidate Chrystia Freeland as “manipulated media.” Justin Trudeau ignored the allegations and continued to defend the manipulated content. On Monday, at a campaign stop in Halifax, Trudeau defended the tweet and added “what’s really important here is that in the middle of a pandemic, Erin O’Toole came out unequivocally in support of private health care, in terms of for-profit healthcare.” With a wide smirk on his face, he happily defended the dissemination of fake, manipulated news.

Despite Twitter flagging the content, and despite numerous accusations of disseminating false information, Justin Trudeau and the Liberal Party are choosing to continue to push this narrative, hoping Canadians won’t see through it. The party also publicly disagreed with Twitter’s decision and demanded an explanation from Twitter.

In return, the Conservative Party of Canada is asking Elections Canada to formally investigate the situation as a violation of the Canada Elections Act. Their legal team sent a letter to the commissioner of Elections Canada.

So why is the Liberal Party turning to manipulated content and lies during the first half of the campaign? Is it because they called this election thinking they have a majority in the bag? According to the polls, that majority seems to be further away than they thought.

This is a good sign for the Conservatives. Having recently released their detailed recovery platform, the Liberal waroom acknowledges that the platform is strong. Without valid reason to attack their leader or policy propositions, the Liberals are forced to stoop down to juvenile tactics and falsify Conservative messaging.

The irony of this situation is that in the last sitting days of Parliament, Justin Trudeau tried to push Bill C-10, which would regulate and control harmful misinformation online. If it had passed, would Bill C-10 have stopped Freeland from posting the manipulated content?