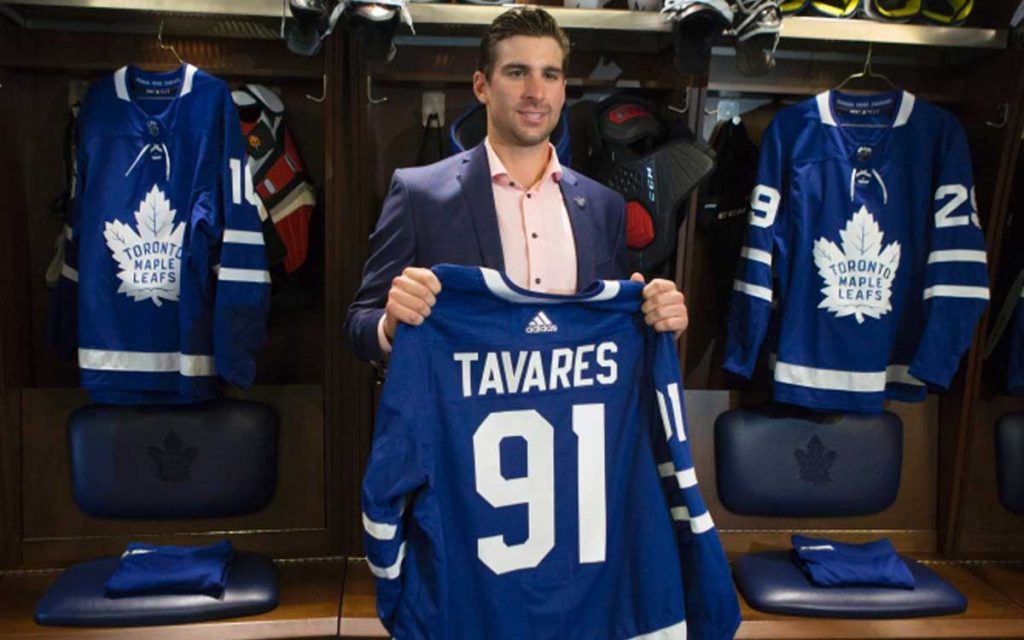 Only in our home and native land, on our national birthday, on the hottest weekend in many years, could hockey occupy centre stage.

July 1 is not only Canada’s birthday but also “Free Agent Frenzy” day in the NHL.  Every July 1 at noon, all NHL teams can start to sign NHL free agents.  Weeks of speculation on which free agent will go where lead into the big day.

This year the biggest unrestricted free agent on the market was the New York Islanders’ captain John Tavares.  The 27-year-old from Mississauga has been with the Islanders for nine years and has been one of the top 10 players in the NHL for probably the last five.

Prior to July 1 Tavares and his agent met with five handpicked NHL teams to let them know that they were the select few he would consider signing with for the 2018 season and beyond.  They were the Islanders, Toronto Maple Leafs, Dallas Stars, Tampa Bay Lightning and the San Jose Sharks.  At 12:45 the news came out that Tavares was going to fulfill his childhood dream by signing with the Leafs.  He signed a seven-year deal for an average $11 million per year, making him the second highest paid player in the league behind only Connor McDavid.

The signing of one of the best players and leaders in the league immediately vaulted Toronto into a Stanley Cup contender.  With Tavares, Auston Matthews and Nazem Kadri as their top three centres, Toronto has unparalleled strength down the middle.  With youngsters like Mitch Marner, William Nylander and Morgan Rielly coming off strong years – the Leafs finally look like legitimate contenders for years to come.

About seven hours later, down the QEW, the Buffalo Sabres made their own splash.  Quiet in the free agent market, adding only a veteran goaltender and three other bit part players – the Sabres moved their best player, the apparently disgruntled with the locker room Ryan O’Reilly, out of town. The Sabres got three players and two draft picks in return from the St. Louis Blues.

O’Reilly was a major acquisition just three years ago by then GM Tim Murray.  Murray traded several young players to acquire O’Reilly who came with a great reputation as a quality centre iceman with a strong work ethic and good leadership qualities.  O’Reilly has been excellent playing for the sad sack Sabres, their best two-way centre always drawing the other teams top line as his assignment to play against while also killing penalties and playing on the power play.  The Blues have themselves the best player in the deal – a guy who is often the Captain of Canada’s World Championship teams after the Sabres perennially miss the playoffs.

Buffalo gets back two underperforming 30-year-old veterans, winger Vladimir Sobotka and centre Patrik Berglund.  Berglund was a first round pick in 2006 by the Blues whose best year was 2010-11 when he tallied 22 goals and 52 points.  Sobotka has been back and forth between the Blues and the KHL since 2010.  His best year was 2013-14 when he had 9 goals and 24 assists in 61 games.

The centrepiece for the Sabres haul besides the first-round pick in 2019 and second rounder in 2021, is St. Louis’ 2016 first round pick Tage Thompson.  He is a 6’5” centre from Phoenix who excelled in the U.S. National Team Program and played 41 games last year for the Blues.  It’s hoped he can find some chemistry with fellow Sabres youngsters Jack Eichel, Sam Reinhart, Casey Middlestadt and this years first overall draft pick, defenceman Rasmus Dahlin.

While the Leafs are clearly in a position to win now – their closest NHL neighbours and rivals, the Sabres, are unmistakably still in a rebuild.  Only Rasmus Dahlin immediately meeting lofty expectations and a Jack Eichel learning that giving 60% is not enough, will the Sabres be able to accelerate their success to match what the Leafs are about to embark upon.