Liberal budget offers no real vision for Canada’s economy over long term, nor any clear anchors to combat rising cost of living 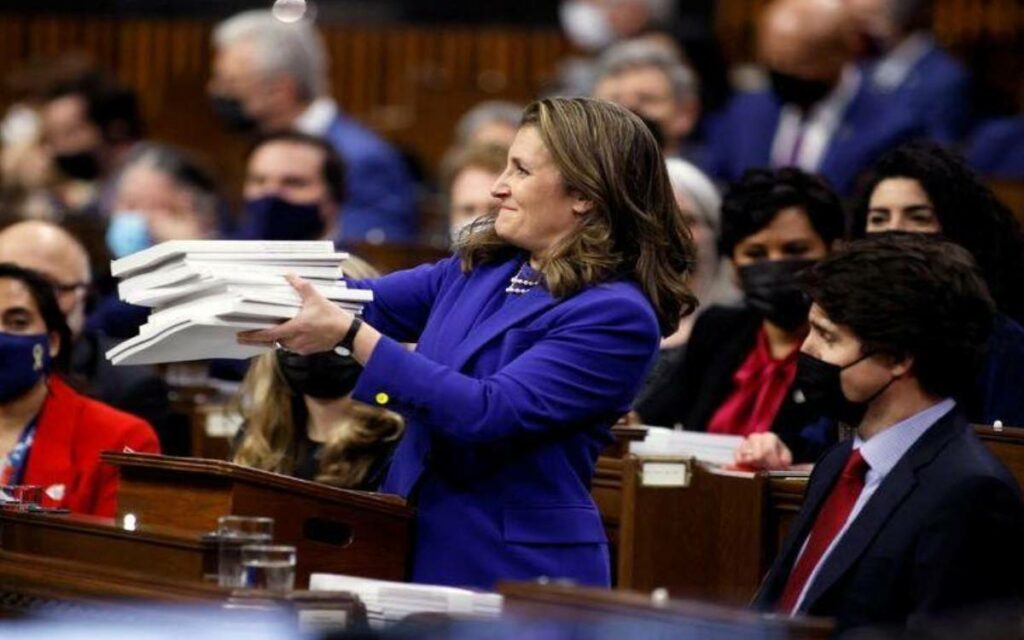 Budget Day is like Christmas Day with a divorced family. The government is eager to shower the kids, in this case, voters, with lavish gifts and little regard for how much everything costs. While the other parent is in the corner grumbling about how this does not make up for being a deadbeat the other 364 days of the year. Yes, this is extreme, but so is Budget Day.

If anything, the budget that Minister Chrystia Freeland tabled last week can be described as a document that shows some fiscal restraint. Compared to Budget 2021, this seems like the Liberals will need a new set of red pens as this year’s projected deficit is only $52.3 billion, which is nearly half of last year’s figure. Given that the Liberals tabled this year’s budget with nearly 500 fewer pages, one would think our debt would be lower. So where is the money going?

If you are a first-time homebuyer or a member of Canada’s Armed Forces, this is the budget for you. To help young people enter the market, the government is creating a savings account that combines features of RRSPs and TFSAs. Though seeming a good idea, because who does not like saving on their taxes, this fails to address the underlying issue of supply.

The budget also included a much-needed investment in Canada’s military. The government is committing nearly $8 billion in new funding on top of billions in already scheduled increases and launching a review of the country’s defence policy. Canada’s military assets are an embarrassment compared to our allies. The issues that the military faces cannot fall entirely onto this government’s shoulders but can be shared among several governments of all political stripes going back decades.

When looking at the budget proposed compared to the Liberal platform, or even the demands that the NDP outlined to prop up this government, there seem to be missing parts. There is no real vision for Canada’s economy over the long term, nor any clear anchors to combat the rising cost of living. The Conservatives and Bloc Québécois were quick to condemn the budget and say their respective party cannot support it. Which should be a shock to no one.

Since the NDP agreed to support the government until 2025, the Liberals do not see any value in pandering to these parties. They only have to pander to the NDP, and given how far this government leans left, it just seems natural. But the NDP should not be happy with this budget.

The view of the NDP agreement to support the government left people around Ottawa in different states. Liberals spun this as a come-to-Jesus-moment for the NDP, where the party and their leadership realized the likelihood of an NDP government was not in the cards. So, the second-best thing is a seat at the kid’s table where the government would toss them a bone every once in a while to keep them on team Trudeau.

This way the NDP can say in the next election, whenever that might be, that their progressive ideas work, and that you can trust an NDP-led government. But so far, they only have a means-tested dental care program that fails to provide dental care to all Canadians in a timely fashion. There was a promise to table legislation by the end of 2023 around pharmacare, but given how this government treats promises, the NDP should not hold their breath. The NDP is still waiting on the government’s 2015 promises about electrical reform.

This budget places the NDP against a rock and a hard place. The budget does not outline any real progressive commitment. While the NDP is in no shape to face another general election. Not to mention, most Canadians have no interest in returning to the polls anytime soon. The agreement to support the government is young, while the budget process is long and one that cannot be easily adjusted on a short-term notice.

Like the partner of a divorced parent, the NDP will just have to sit there and support the government’s spending this Christmas. If the NDP was smart, they would have a serious conversation with the government about implementing the progressive agenda they both agree on. If at the end of this the NDP has nothing to show as a political win, their challenge in the next election will not just be money but coming up empty-handed and egg on their face.