Lifting the Rock on the NDP and “Angry Andrea” 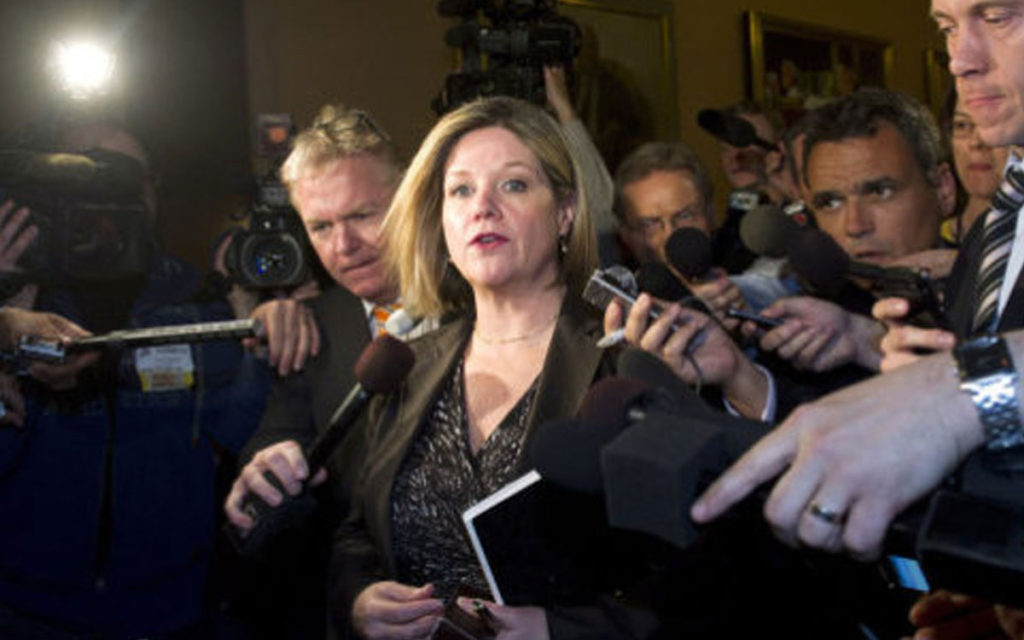 The Ontario election is now just over a week away, and the outcome looks as unpredictable as ever.  With the apparent surge in support for Andrea Horwath and the NDP, the spotlight is finally being focused on the party, its leader, candidates and many of its highly questionable policies.  The NDP has had the luxury of operating under the radar and getting an easy ride from the media and others for most of this election campaign as the party was not expected to be a serious contender for government.  That has changed, and it is high time it attracted the scrutiny the other parties have been under for quite a while.  Now that the rock is being lifted, all kinds of worrisome things are crawling out.

It seems that this increased pressure is getting to Ms. Horwath, as evidenced in last Sunday evening’s leaders’ debate.  As the debate progressed, the NDP leader became increasingly angry, arrogant and condescending, and she made a practice of interrupting the other leaders incessantly. Of course this was a political debate and not expected to be a polite discussion, but both Kathleen Wynne and Doug Ford were notably more respectful of the others leaders’ time to bring their issues forward than was Andrea Horwath.  It is also interesting to note that a couple of days prior to the debate, Ms. Horwath was quoted in the media as having complained about criticism being leveled at some of the NDP candidates and said that kind of criticism could lead to people being cynical about politics.  Huh? Horwath has been in politics for a very long time, yet is suddenly shocked – shocked! – about criticism of politicians because it is now being directed at her and her colleagues? Give me a break.

The increased examination of quite a few NDP candidates has indeed been very revealing – and often alarming.  Coverage of the poppy-hating, military-criticizing candidate has been widespread, as has her Hitler-quoting colleague and the fellow that enjoys women’s oil-wrestling tournaments. But a look at the entire slate of NDP candidates reveals a plethora of union activists, government employees and social justice warriors that don’t seem acquainted with the concept of gainful employment.  One particularly outspoken NDP hopeful recently sent a tweet calling anyone who questioned the “sanctuary province” NDP platform plank as an “anti-immigration misogynist” and said that despite legitimate questions around this radical policy – such as its cost and impact on our already challenged health care system – the party wouldn’t “budge an inch in this”.  Is this the kind of intolerant, closed-minded folks we really want running our province?

The last time the NDP were in power in Ontario under Bob Rae, the election outcome was truly a shock to just about everyone.  As a result, the party and its many dubious candidates had attracted very little attention until the NDP majority government was a fait accompli.  This time around, we voters have had some notice that the NDP were contenders so there has been some ability to look a little deeper into what the NDP plans are should they win the election.  The revelations that have emerged, and Andrea Horwath’s hostile reaction to the scrutiny as more information has become available about her party and its policies, should make Ontario voters think long and hard about the important choices they will make on June 7. If you can’t take the heat, maybe you shouldn’t be in the kitchen.

Lifting the Rock on the NDP and “Angry Andrea”