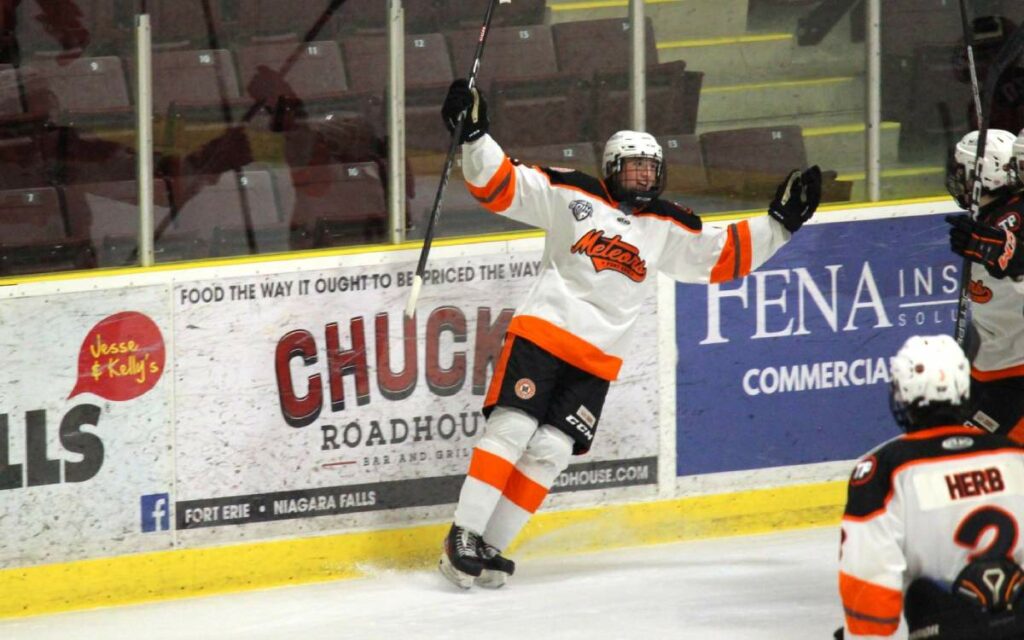 Last year’s GOJHL championship squad from St. Catharines currently sits atop the Golden Horseshoe Conference. The Fort Erie Meteors (pictured) are in third and lead the conference in offence, with 131 goals on the season. Photo credit: Facebook/Fort Erie Meteors

The holiday break can’t come soon enough for some local junior hockey teams, while others likely would like to keep their strong play going.

Let’s start with the Niagara IceDogs, who for the first time since 2007 are playing under a new ownership group. The team can only go in one direction (hopefully) – up.

The IceDogs will wrap up 2022 in last place in the 20-team Ontario Hockey League (OHL) and are playing under their third head coach of the season after Daniel Fitzgerald was dismissed of his duties, and interim bench boss Jeff Angeledis was replaced by Ryan Kuwabara, who’s pro coaching experience is appreciated by the players.

“Coach Kuwabara is a true leader, the definition of a players coach,” Niagara captain Landon Cato told The Niagara Independent.

“Since the first day he stepped into the Meridian Centre, he is huge on culture and is doing his part in changing the culture in the dressing room.

Coach Kuuy (Kuwabara) loves the game and knows a lot about it. I feel he is going to take our team to the next level for sure.”

Kuwabara is also the first head coach in OHL history of Asian descent.

Let’s turn our attention to the local Jr. B hockey loop, where Niagara is represented by six teams in the eight-team Golden Horseshoe Conference of the Greater Ontario Junior Hockey League (GOJHL).

Every team in the conference has played at least 30 games, as the defending champion St. Catharines Falcons lead the standings with a (25-3-2) record good for 52 points.

The Falcons have allowed a GOJHL low 59 goals, and have not lost in regulation in 13 games.

“The team has put in genuine effort through the first 30 games,” said head coach Tyler Bielby when contacted by The Niagara Independent.

“It’s a determined group who shows up to the rink to get better everyday. Their hard work has paid off year to date, and we will continue to challenge the boys to improve.”

Hamilton sits in second place, followed by the (21-8-3) Fort Erie Meteors, who continue to impress and lead the conference in goals scored with a 131 on the season.

Caledonia currently holds down fourth place, while the Thorold Blackhawks have turned their shaky start to the season and now sit just one game below .500 at (15-16) on the campaign.

Pelham is currently winless in its last 14 games.

As it stands right now, the road through the playoffs goes through St. Catharines.

“It’s always nice to sit in first place, but that also comes with extra responsibility. There will be no easy games the rest of the way and it’s important that we stay humble and hungry.

The first thirty (games) have been great, and we look forward to the next twenty.

We continue to grow as a team and play the right way, and look forward to a long playoff run. The Sutherland Cup is what we play for in this league. That is the ultimate goal,” Bielby added.