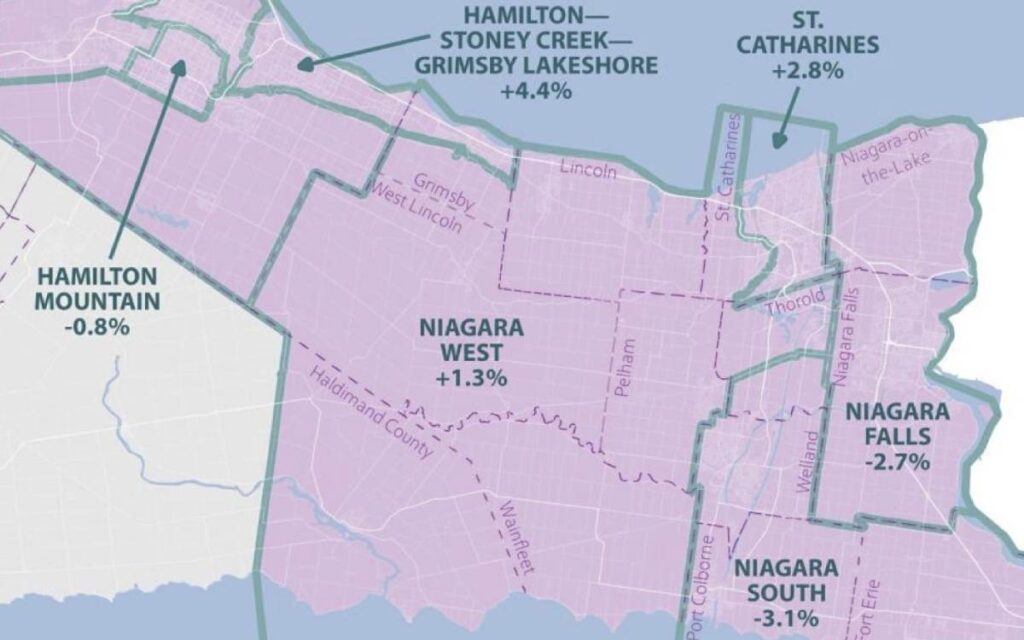 Come the next federal (and provincial) election, some Niagara residents will be casting their vote in a brand-new riding. Among other shifts, Fort Erie is expected to join the newly formed riding of Niagara South, Niagara West is set to gain over 20,000 new residents, while half of Grimsby is anticipated to move over to Hamilton’s most easterly riding. Pictured is a map of Niagara’s new proposed ridings with their corresponding deviation from the electoral population quota of 116,590. Photo credit: Federal Electoral Boundaries Commission of Ontario

The proposed changes were made in response to and reflect Ontario’s significant population increase from 12,851,821 in 2011 to 14,223,942 in 2021, and account for the allocation of one additional district.

The last federal electoral redistribution took place in 2012, after the 2011 census and passage of the Fair Representation Act, which increased the number of seats in the House of Commons from 308 to 338.

“In exercising its mandate under the Electoral Boundaries Readjustment Act and given the allocation of one additional district to Ontario, the Commission found it necessary to propose many new electoral boundaries to correct wide variations in voter equality that have emerged across the province over the past decade due to population change,” Honourable Justice Lynne C. Leitch, chair of the commission, said in a media release following publication of the proposed redistribution.

Under the Electoral Boundaries Readjustment Act, the commission’s main goal is to divide the province into 122 electoral districts that are as close to the “electoral quota” as reasonably possible, while taking into consideration communities of interest (or identity) and historic and geographic factors.

Calculated by dividing the province’s current population by the number of ridings, Ontario’s new electoral quota per district is 116,590, up more than 10,000 residents per riding from a decade ago.

The commission has proposed several dramatic changes for the Niagara Peninsula’s four ridings.

To begin, should the alterations come into law as recommended, the electoral district of Niagara Falls would no longer include the municipality of Fort Erie.

The riding would retain its current name but move forward as just the City of Niagara Falls and Town of Niagara-on-the-Lake.

Based on data from the 2021 census, Niagara Falls is Ontario’s fifth most populous electoral district. With 146,404 residents, the riding currently deviates 25.6 per cent above the electoral quota of 116,590.

With the proposed removal of Fort Erie, the riding’s population would fall to 113,503, 2.7 per cent below the commission’s target figure.

The redistribution would see Fort Erie join the cities of Port Colborne, Welland, and the half of Thorold lying southerly of Highway 20 to make up the newly named electoral district of Niagara South. The current riding of Niagara Centre would be no more.

With only 96,946 residents based on 2021 figures, 50,000 less than Niagara Falls, Niagara West is one of southern Ontario’s least populated federal ridings. “Significant adjustments”, according to the commission, “were required to achieve population equality” for the riding.

The realigned riding of Niagara West would effectively include all of the abovementioned, less the part of Grimsby lying northerly of the Niagara Escarpment. It would then be afforded slightly more of the City of St. Catharines, the half of Thorold north of Highway 20, and a significant portion of southeast Haldimand County, including the community of Dunnville.

At 118,158, the resultant population of the riding would be 1.3 per cent above the electoral target.

The current electoral district of St. Catharines would remain largely intact, gaining about 5,000 residents with the dissolution of Niagara Centre, despite losing more population to Niagara West. Based on the proposed changes, St. Catharines would be the most populous riding in Niagara at 119,873 residents, or 2.8 per cent above quota.

As alluded to above, lost in the shuffle would be the section of Grimsby north of the Niagara Escarpment. Residents in that portion of the town would join with the current riding of Hamilton East—Stoney Creek to form the new electoral district of Hamilton—Stoney Creek—Grimsby Lakeshore. The consequent riding would have a population of 121,709, a deviation of 4.4 per cent above the electoral quota.

Outside of a few ridings in Ontario’s far north, the federal redistribution will automatically realign the province’s provincial ridings to conform to the new boundaries for the 2026 election.

Commissions in Canada’s other nine provinces are currently working on readjusting their respective jurisdictions’ electoral districts to most closely align with prescribed quotas.

All proposed changes are not final, and residents can still have their say. The commission will be holding virtual and in-person public hearings regarding the new boundaries and name changes throughout the months of September and October.

A virtual hearing regarding changes relevant to Niagara will take place Tuesday, Sept. 27 at 6:30pm. A link will be provided upon registration.

An in-person hearing will take place in St. Catharines at Brock University’s Pond Inlet in J-block of the Mackenzie Chown Complex on Friday, Oct. 21 at 6:30pm.

Anyone hoping to attend a hearing can do so by completing the Public Hearing Participation Form by Sept. 25, 2022.

Written submissions will also be accepted via mail and/or e-mail at the addresses provided here.

The finalized new representation order will be announced September 2023, however, changes to the electoral boundaries will not come into effect until Apr. 1, 2024, at the earliest.

Canada’s next federal election must take place on or before Oct. 20, 2025. Ontario’s next provincial election is scheduled for Jun. 4, 2026.