Mass walkout a betrayal of students, families and taxpayers 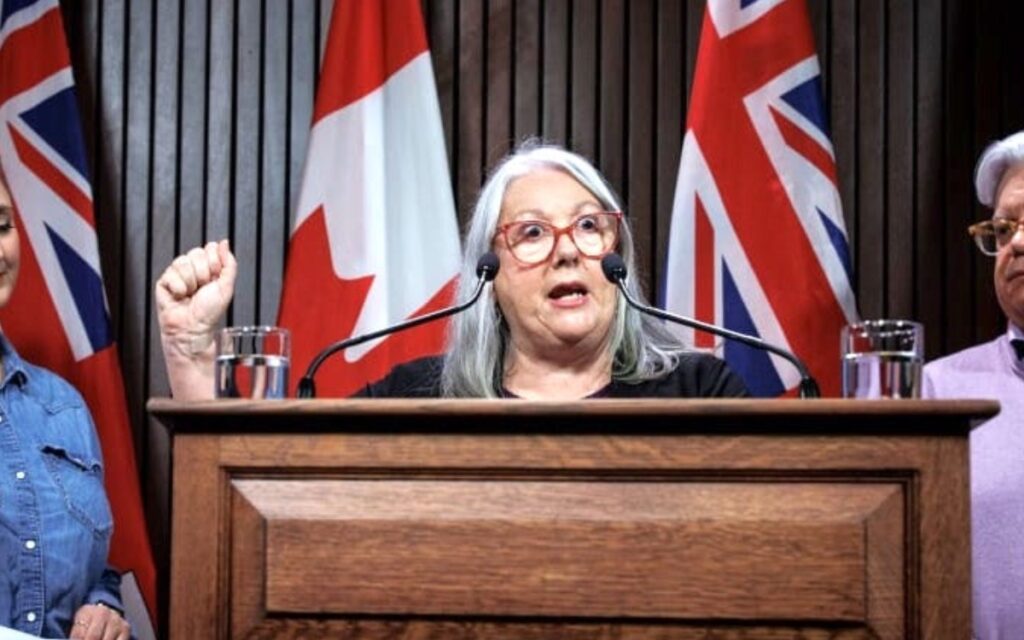 The “day of protest” is ostensibly a response to the Ontario government tabling back-to-work legislation intended to prevent education workers from striking. Pictured is head of the Ontario Federation of Labour Patty Coates during a news conference at Queens Park on Monday alongside OSBCU president Laura Walton (left) and CUPE president Fred Hahn. Photo credit: CBC/Evan Mitsui

The last-minute announcement by CUPE of a mass walkout Monday by tens of thousands of school support workers is a disgraceful action that should be condemned by all Ontarians. The province-wide “day of protest” is clearly designed to inflict the most disruption on families and students by giving parents virtually no notice to make alternative arrangements for their children if they cannot attend school.

This extreme union action was supposedly a response to the Ontario government’s tabling of pre-emptive legislation to prevent these workers from striking. The legislation, entitled the Keeping Students in Class Act, includes a salary increase of 2.5 per cent annually for employees below $43,000 and 1.5 per cent for employees with salary maximums above that amount. This is a slight increase from the previous government offer. The Act also includes an increase in benefits contributions, modifications to sick leave and short-term disability plan provisions, while still maintaining generous pensions, other benefits and sick leave programs and $4.5 million for apprenticeship training.

And as usual, the union is misrepresenting the issues involved. It is no accident that CUPE is leading off negotiations with the lower-paid workers in the education system – teaching assistants, custodians, early childhood educators and administrative staff.  As these workers are paid considerably less than teachers, they can be expected to garner more public sympathy. Yet as many commentators have pointed out, many of these workers are part-time and if factors such as pensions, early retirements and other benefits are included their overall compensation increases significantly.

The current union demand is for an 11.7 per cent annual increase over a four-year contract, which would amount to effectively a doubling of salaries over this period. In other words, an absolutely outrageous demand. Another important consideration is whatever settlement is ultimately reached with these workers will create a precedent for future negotiations with teachers, who are already extremely well-paid for working nine months of the year with the ability to retire at 55 on a full, generous and indexed pension, among other benefits. Private sector taxpayers, many of whom were financially devastated during the pandemic and have yet to recover, are clearly of no concern to the public sector unions.

It is well documented that government employees everywhere in Canada enjoy compensation that is on average significantly higher than the same job in the private sector, not to mention additional benefits and the guaranteed pensions that are rarely seen outside of government. And even though government employees are paid very well, Canadian public service quality is mediocre at best, and often inferior.  This is certainly the case with education in Ontario, where student test scores have for years been declining despite much higher spending.

History shows that education unions are never happy with any government. The McGuinty Liberals were very accommodating of education union demands as they more than doubled the amount of taxpayer money spent on education workers during their tenure. Yet those same unions were still at loggerheads with the Liberals.

As governments remain heavily indebted from pandemic spending and other imprudent financial practices, and economic forecasts are dismal, it is high time for a reckoning with government unions in the interests of taxpayers and future government financial stability. In the case of education, it should be declared an essential service to do away with this foolish and financially unsustainable brinksmanship for good, while bringing overall compensation and benefits in line with comparable private sector jobs.

Students and families were greatly disrupted throughout the pandemic, with many negative repercussions continuing to this day. All the while the public school system was not functioning, all government employees continued to collect a regular paycheque despite the fact they were often not working full time or working at all for weeks at a time. Ontarians should be outraged by this latest disruption by CUPE and recognize it for what it is – an appalling and unjustified act by a spoiled constituency that always wants special treatment yet shows no concern for anyone but themselves. Shame on them.