Mayor Redekop recounts Fort Erie’s Christmas nightmare, and how the community rose to the occasion 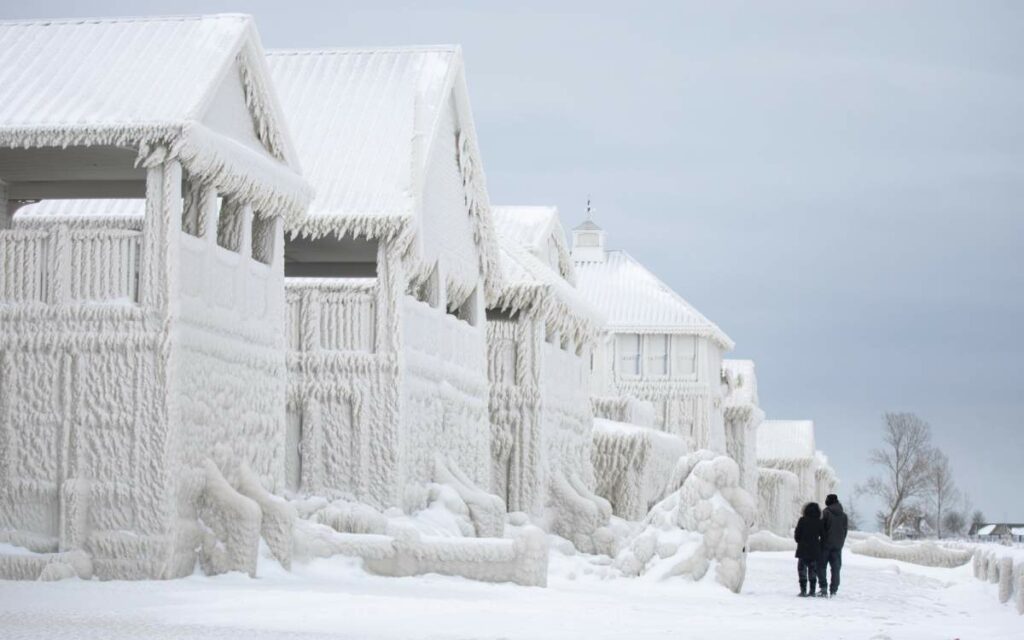 The town’s long-time head of council said the storm that ripped across Niagara’s south coast in the days before Christmas – encasing some lakefront homes in solid ice – was the worst weather event the municipality’s seen since 1977. Photo credit: Twitter/Nick Iwanyshyn

When an extratropical cyclone took more than half of North America hostage a mere two days before Christmas, Fort Erie was in the eye of the storm, and captaining the small town’s preparation and response efforts was Mayor Wayne Redekop.

“It was unbelievable”, Redekop, who was re-elected mayor of Fort Erie for the sixth time in October, shared during a recent interview with The Niagara Independent.

“We were following the forecasts predicting a significant winter storm… but it became clear early-on that this was not the sort of system that would simply blow-over.”

“At 7am, we were still comfortably above freezing. By early-afternoon, it was -11 Celsius”, Redekop shared.

As temperatures plummeted, the roads became increasingly perilous as the soaked ground froze, precipitation turned to snow, and life-threatening winds developed in the wake of the sharp cold front.

Redekop said that the night of the 23rd and the day of Christmas Eve were the worst. “At the height of it, approximately 11,000 residents of the town were without power.”

In addition to these widespread disruptions, there were also numerous examples of cars getting stranded on and off the municipality’s roads. “We even had a doctor get stuck on the way to work, who was eventually rescued by a snowmobile, but not until hours later.”

As Christmas Day arrived, conditions began to improve, allowing for the dig-out to commence in full. “By late afternoon Christmas Day, many main roads had been cleared, and people were starting to be able to navigate short trips. As we moved into Boxing Day, and every day thereafter, it got progressively better.”

But because of the storm’s extreme impact, service workers were diligently on the job throughout the entirety of the Christmas weekend, with thousands of residents without power for several days after the storm passed.

“They gave their all, for literally days on end, restoring power, for all of Christmas Day, and right through Boxing Day.”

In addition to municipal/regional workers and first responders, however, countless everyday citizens also rose to the occasion.

“We were extremely grateful that so many people finished their shopping ahead of time, altered their Christmas plans and made a real conscious effort to stay home, keeping themselves and their loved ones safe,” said Redekop. “At the same time, I was also amazed by how people went above and beyond to support their community during this extreme situation… We had, for example, a family that owned a farm, welcoming people who had been stranded into their homes to spend the holiday. It was really inspiring to see.”

While the community, on the whole, was incredibly supportive of their fellow neighbours, Redekop pointed out a few exceptions.

“We did encounter a few cases of people who were impatient about getting the roads cleared/power coming back, and in some cases, they tried to venture out while it was still unsafe… thankfully, we did not endure fatalities.”

“And look,” Redekop continued, “I get it… these have been tough years for us, and everyone was looking forward to the first ‘normal’ Christmas since 2019. Still, you have to think about the big picture – we’re talking about people’s lives, people’s safety.”

Redekop believes Fort Erie is well-prepared to weather any future storms that may arise. Still, he is hoping that closer coordination between the province and municipalities can be developed.

“It is most typical for the province to communicate with a representative from the Niagara Region during this type of crisis. However, one municipality might experience an event of this nature much differently than another.”

“When I updated the regional chair, Jim Bradley, on Christmas Eve afternoon, the sun was coming out in St. Catharines, yet in Fort Erie, we were still getting hammered. I appreciated the opportunity to eventually speak with Premier Ford directly, but enhanced communication with our provincial counterparts would have been beneficial much earlier, as well.”

By New Year’s Eve, unseasonably warm temperatures had melted much of the snow and ice. “If you visited Fort Erie over the (New Year’s) weekend, you wouldn’t have any idea what trials our community had faced, merely days ago. This was a generational event.”

When asked to pin-point comparable weather events, Redekop said there are none in recent memory.

“This was the worst we’ve seen since the Blizzard of ‘77… there have been a number of bad storms, for certain, the least of which was not (Lake Storm Aphid), in October 2006.”

“What made the most recent one so dangerous, however, was the fact that it brought rain, ice, snow, wind and a hard-freeze. These conditions, accumulatively, presented us with a worst-case scenario.”

The extreme weather event may not have surpassed its counterpart from over half a century ago in terms of severity, but the Christmas Blizzard of ’22 sure gave the infamous storm from ’77 a run for its money.

EDITOR’S NOTE: The author of this piece is related to Mayor Redekop.