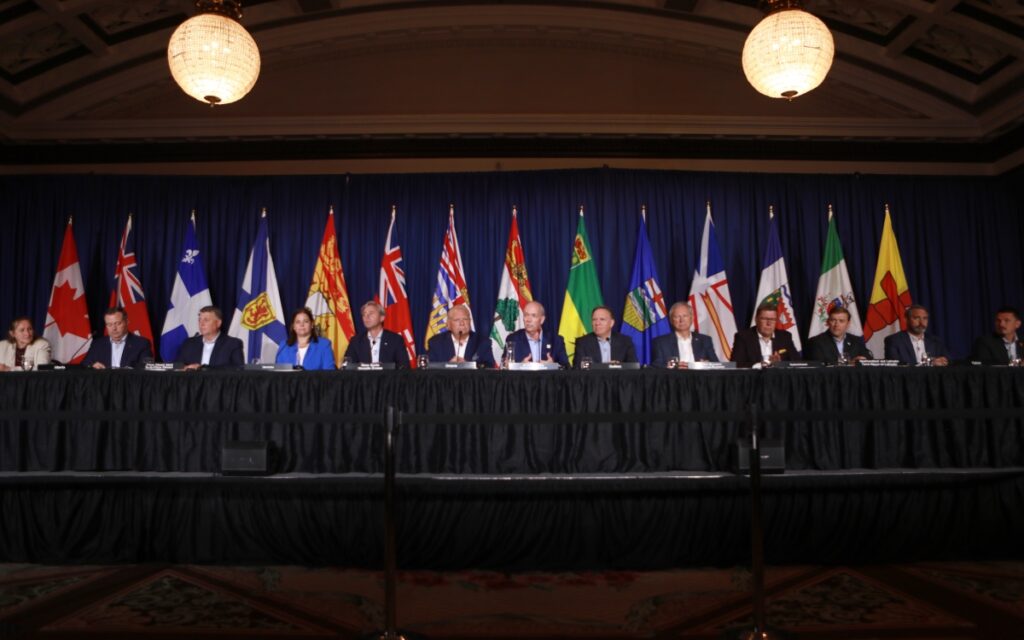 Canada already has one of the highest levels of per capita health care spending among developed countries in the world, and citizens are hardly getting good bang for their buck. Thus, the country’s Premiers should stop spending time and money asking the federal government for more taxpayer dollars and instead concentrate their efforts on garnering public support for the kind of structural changes necessary to see actual improvement. Photo credit: The Canadian Press/Global News

You have probably noticed the recent ads chastising the federal government for “only” contributing 22 per cent to overall health care expenditures, courtesy of “Canada’s Premiers”. The Premiers would like to see federal funding expand from 22 per cent to 35 – a massive increase. The ad copy states that the provinces and territories are “doing their part” but they need the federal government to kick in more money.

The absurdity of the Premiers using scarce tax dollars to finance an advertising campaign intended to induce the federal government to tax us even more, and spend a larger amount of our tax dollars in an area where Canada is already one of the biggest spenders in the world, should not be lost on Canadians.

The whole federal-provincial spending issue is an age-old tug of war in which different levels of government try to convince Canadians that the other guy is not doing his part, while the only result achieved is higher taxes funding public services of deteriorating quality.

The claims made in the ads are also not exactly accurate. Over the years, in addition to health care transfers, the federal government has also ceded tax points to the provinces, vacating previously-federal taxing ability to provincial governments. Taking into account this past transfer of tax points, some experts estimate the federal spending proportion is already about 35 per cent.

As for “doing their part”, there have been many instances in the past when various provinces have been found to spend funds supposedly transferred for health care purposes on areas that had nothing to do with health care, which explains why provinces always seek to have such transfers made with no constraints on how they are spent. The notion that provinces are truly “doing their part” is at best a stretch.

In 2022, the Canadian Institute for Health Information forecasts that total health care spending in Canada will be $331 billion, which translates into $8,563 for every Canadian. This is one of the highest levels of per capita spending among developed countries in the world. Some of this cost is expected to arise from post-pandemic catch-up as people seek to deal with health issues they put off dealing with because of the pandemic. As any Canadian who has needed to access health care services lately can attest to, we are not getting much bang for the buck.

To date, the federal government has committed to very slight annual increases in health transfers to the provinces, but nowhere near the funds the provinces are requesting.

Some provinces are going ahead with major spending increases on their own. For example, the BC government recently committed to upping doctors’ compensation significantly from $250,000 annually to $385,000 as a means of dealing with their doctor shortage. Other provinces are also looking at increasing the pay rates of front-line health care staff. However, international comparisons show that Canadian health care professionals are actually quite fairly compensated.

The fact that the Canadian system is heavily burdened with costly bureaucracy, rigidities and inefficiencies is a key problem that no government seems to be able to deal with effectively. And although the pandemic significantly increased the overloading of the health care system, it merely exposed the cracks that had existed for years.

Instead of attempting to influence public opinion to support extracting more money from the federal government, the Premiers should be focused on encouraging public support for the kinds of structural changes to health care that too many Canadians continue to resist, such as permitting more private sector competition and allowing patients to access private care when public wait times are too long.

The myth of the wonderful, top-quality, “free” Canadian health care system continues to exist for many, despite all facts to the contrary. Unhelpfully, many of our courts also make decisions aimed at perpetuating this myth and blocking structural changes. Until there is enough support for the needed changes, we will be doomed to endure a worsening health care system at ever-increasing cost.  Canadians would be better off if the Premiers would devote the money spent on this advertising campaign to actual health care, and start to look at solutions that would make a real difference.