More lies from the Left 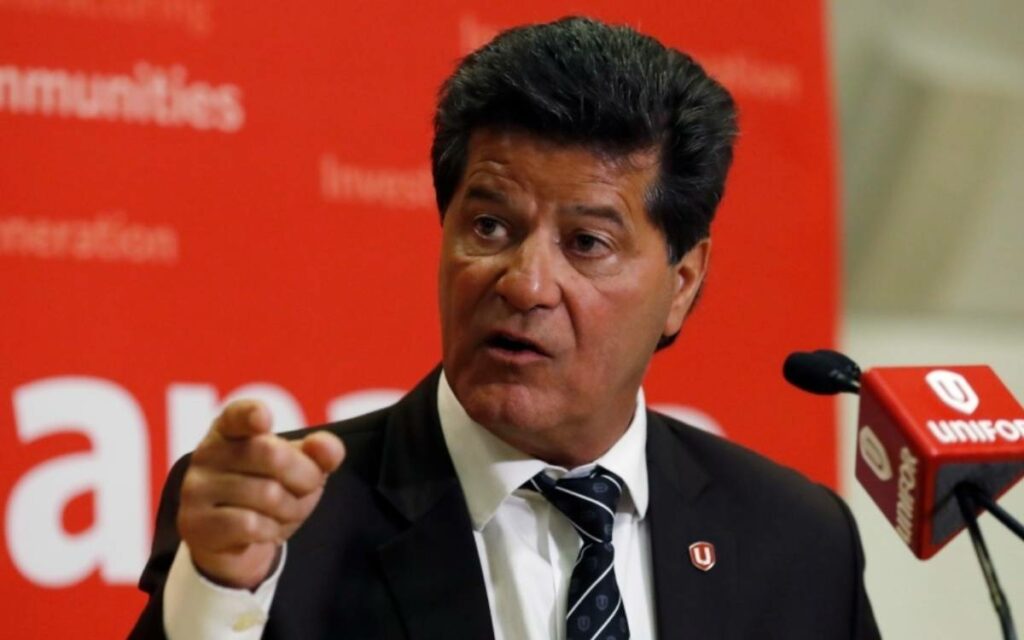 Jerry Dias, head of Canada’s largest private sector union Unifor. The union recently launched an attack ad campaign against Erin O’Toole and the federal Conservatives, claiming O’Toole will just institute “more cuts” and provide “more money to big corporations”. The irony, as Swift writes in the piece below, “is that the current federal Liberal Party, which is very cozy with the labour unions, is actually much more prone than Conservatives to handing out billions of taxpayer dollars to big corporations.” Photo credit: AP/Carlos Osorio

A recent tweet from Ontario’s NDP demonstrated that we are very much in pre-election mode in the province, despite the fact that the next election is still about 10 months away. The content of the tweet was interesting too, as it promoted a viewpoint that is quite misleading, but may signal the approach the NDP plans to take in criticizing the incumbent Progressive Conservative government. The text of the tweet was as follows:

“We don’t rely on donations from insiders and lobbyists like Doug Ford, which means when we’re elected we’ll be a government that does what it’s supposed to: serve its people. It’s time to change Queen’s Park.”

This claim is laughable at best. For the NDP to pretend they are not in the pocket of interest groups is pure fiction. Granted, the “insiders and lobbyists” involved with the NDP may be somewhat different than those who focus on the Conservatives, but they are still very much influencing and financing the NDP, possibly to a greater degree than those who influence other political parties. And on balance, the groups that are most effective at promoting their interests with the NDP – and for that matter the current Liberal parties in Ontario and federally – include the labour unions and extreme environmental organizations, entities whose agendas are often very damaging to the majority of Ontarians.

For the last 25 years or so in Ontario, it is well documented that the unions have been by far the biggest spenders on partisan anti-Conservative advertising, massively outspending businesses, other interest groups and the political parties themselves. This has benefitted of the NDP and Liberals.

The content of the advertising is typically very fallacious as well, talking about how Conservative governments cut things such as health care and education spending, when no such cuts have taken place. This has prevailed throughout the pandemic, with teachers’ and other public sector unions constantly harping on non-existent cuts to spending, when anyone who is able to read a budget knows that spending has actually significantly increased.

A recent advertising campaign in the federal realm by the union Unifor also promotes a narrative that strains credulity. This ad attacks federal Conservative leader Erin O’Toole, claiming that “We know exactly where Conservative policies will take us – more cuts and more money to big corporations, while working Canadians are left behind”. The irony is that the current federal Liberal Party, which is very cozy with the labour unions, is actually much more prone than Conservatives to handing out billions of taxpayer dollars to big corporations, and implementing policies that are very harmful to small business and the economy generally, to the detriment of the vast majority of working Canadians.

The NDP has historically had an anti-business perspective, supporting policies that are mostly damaging to small businesses while being more accepting of large corporate crony capitalists. This has not always been the case with Liberal governments. For instance, the Liberal government of Jean Chretien and Paul Martin implemented many policies that were favourable to the small business community, and Canada enjoyed healthy economic growth as a consequence. The current federal Liberal government is, however, much more in tune with labour unions and large corporations.

Any government that is overly sympathetic to union interests will end up being bad for small businesses. History shows that Conservative governments have actually been much more responsive and supportive to small businesses than large corporate interests.

Unions dislike smaller firms, as they are very rarely successful in unionizing them, and prefer an economy composed of big government and big corporations. Accordingly, unions promote policies that contain such things as immensely complex labour legislation, big intrusive government, subsidies for big businesses, lots of red tape and other approaches that are costly and harmful for small businesses.

As the small business sector represents roughly half of Canadian Gross Domestic Product and employment, and accounts for the majority of net new job creation, anti-small business policies have a significant negative impact on jobs and the economy overall. A healthy small business community is also an essential prerequisite for a healthy democracy.

Considering the pending elections federally and in Ontario, the coming months will undoubtedly contain much more spending by unions and other leftist groups and political parties on advertising promoting these themes. Ontarians and Canadians generally should consider the source of this information, and do their own homework as to the facts involved. Time and again, those facts show that the pursuit of a big government, big union agenda benefits the minority at the expense of the vast majority of average citizens.