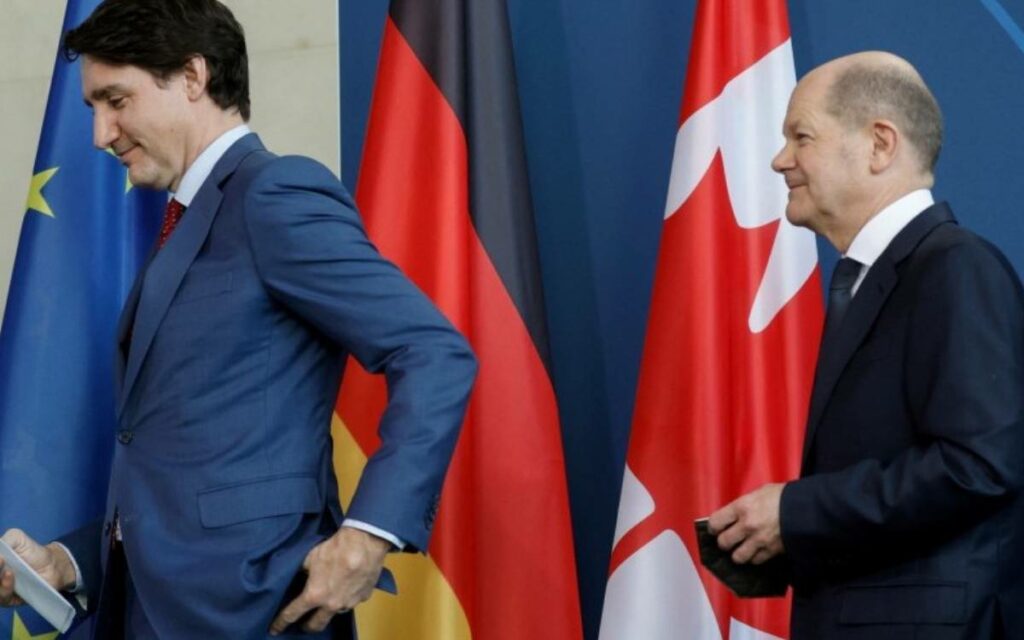 From Trudeau’s tightly regulated tour with Olaf Scholz (pictured) to the government’s move toward a new digital identity program, the Liberals keep delivering the summer hits every Canadian should be both mystified by and concerned about.

Herein are more “summertime snippets,” presented with the requisite warning to read no further if you wish to enjoy what is left of the season. It is suggested that you clip and save the column until after Labour Day.

The Trudeau-Scholz Photo-Ops: German Chancellor Olaf Scholz’s end-of-the-summer sojourn in Canada with PM Justin Trudeau was no doubt fashioned to cast these progressive politicians as forward-thinking visionaries when it comes to their countries’ respective green energy goals. The leaders’ meetings were capped with a visit to Stephenville, Newfoundland and a signing ceremony on a hydrogen export “joint declaration of intent.” The Scholz tour’s success was incumbent on its expressed avoidance of any mention of Germany’s recent request of PM Trudeau to increase liquified natural gas (LNG) exports. In fact, it was dictated to Canadian mainstream media newsrooms by both Canadian and German tour officials that there were to be no questions about German industry having to ration their energy use or its residents freezing in the dark this winter.

According to script, Scholz and Trudeau (and Canadian media) waltzed through the tour and dutifully promoted a joint agreement for Canada to potentially develop a green-hydrogen facility that would, if built, at some time in 2025 (or later), be capable of exporting hydrogen energy to Germany. Clearly this ignores the current reality of the imminent energy crisis facing Europe. It ignores Scholz’s desire for an immediate increase of Canadian gas exports – and, as the National Post Tristin Hopper assesses, “It could well represent one of the biggest missed opportunities in Canadian history.”

Remarkably, when asked about Canadian LNG exports, the math-challenged Trudeau attempted to squelch the idea by questioning the business case for further developing Canadian gas exports. (In related news this month, StatsCan reports an increased trade surplus of $5 billion in June driven by rising oil export volumes. The Canadian dollar has rallied and strengthened against the U.S. greenback on the back of strong oil prices.)

The Trudeau-Scholz joint declaration for hydrogen energy is yet another remarkably nonsensical act by these two progressives who recently, secretly, mutually agreed to return turbines to Vladimir Putin (and word has now broke Canada will be sending five more turbines to Russia).

French Facts: StatsCan news report on Canada’s changing linguistic realities was released with many confusing narratives. The most often cited data told us that there is an increasing number of Canadians whose mother tongue is neither English nor French; 12 per cent of people speak something other than an official language at home. There are nine million people, or one in four, who have a mother tongue other than English or French.

In Quebec, much has been made of the fact there are now less than three of four Quebecers whose mother tongue is French. Quebecois appear anxious that there are now more than one million people speaking English as their first official language in La Belle Province. And PM Trudeau’s take on it: “The numbers that recently came out are extremely troubling and worrisome but not entirely a surprise.”

Let’s consider the StatsCan data without the governments’ francophone preoccupation. Without the political spin there is a clearer picture painted of the nation’s linguistic reality.

With this assembly of the facts, the Globe and Mail published an opinion editorial that declared, “Official bilingualism is officially dead in Canada.”

Directly related to this mid-summer night’s data dump is the language debate that is about to unfold in Parliament this fall. The Trudeau government had pre-knowledge of the data and, in the spring session of Parliament introduced Bill C-13 amending the Official Languages Act. A briefing note for the legislation states: “saving the French language is fundamental to preserving the nation.” The intent of the legislation is to further strengthen the rights of francophones across the country. It will ensure all federally regulated private sector businesses are to offer French service to the public in places with “a strong francophone presence” (this term and its thresholds left undefined).

It appears the government is about to lead Canadians back onto the Plains of Abraham to reenact that infamous battle (this time with another Trudeau rewriting the terms of Malcolm’s defeat).

From the ArriveCAN App to Digital Identity: By every measure the ArriveCAN app is negatively impacting cross border traffic, and yet, the federal government will be transitioning from this app to a soon-to-be-unveiled digital identity program that every Canadian must use.

It matters not what border-town mayors say about the devastating decrease in American tourism, or what border agents say about not being able to properly do their job. Apparently, there is no downside to ArriveCAN, says transport minister Omar Alghabra, as it’s “actually helping process arrivals much faster and helping reduce congestion.” From the media reports of the congestive backlogs at Pearson and Trudeau airports, clearly Alghabra is either in denial or just gaslighting anyone who will listen to him as Liberals prepare for the next shoe to drop.

Public Safety Minister Marco Mendicino this summer suggested the app is here to stay as part of the government’s strategy to better monitor Canadians’ health and safety. News is now trickling out of Ottawa that Treasury Board President Mona Fortier will be unveiling a new Digital Identity Program this fall. It will be billed to provide “a common and secure approach for a trusted digital identity platform to support seamless service delivery to Canadians across the country.”

Yet, government backgrounders state: “Digital identity is the electronic equivalent of a recognized proof-of-identity document (for example, a driver’s license or passport) and confirms that ‘you are who you say you are’ in a digital context.” In other words, Big Brother will be able to keep better track of you – for your own safety and security.

On a hopeful note, a federal court legal challenge of the ArriveCAN app has been launched and it appears the Conservatives are prepared to fight the new digital identity program in Parliament.