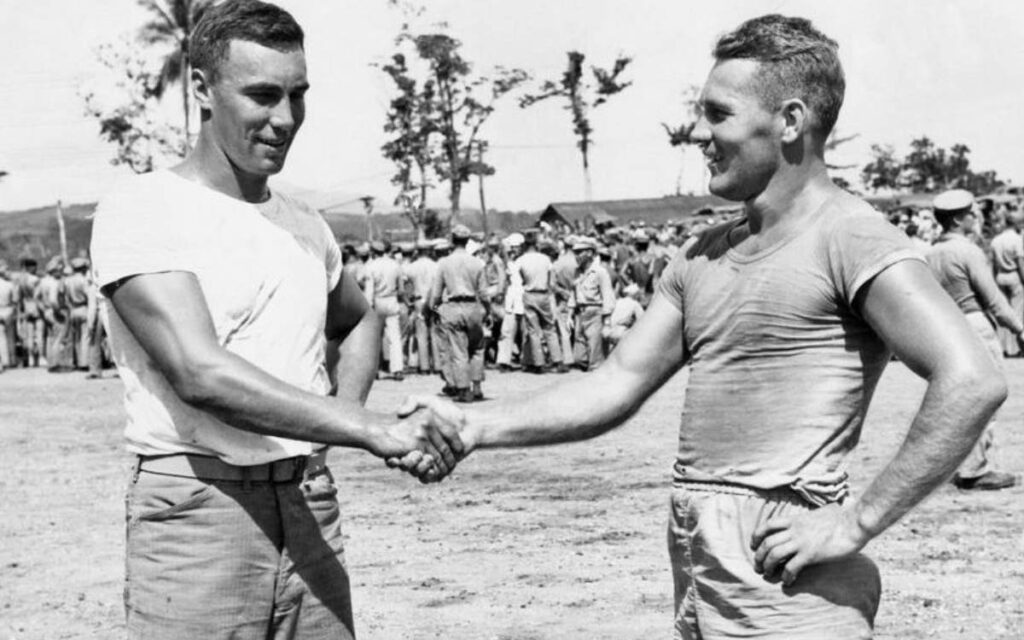 Played on Christmas Eve 1944 between two rival regiments of Marines on the island of Guadalcanal, the wartime football game – the subject of a new book by Buzz Bissinger – provides a valuable lesson in unity. Pictured are Marine Lt. David Scheiner and Cpl. Anthony Butkovich shaking hands before the game, Dec. 24, 1944. Photo credit: United States Marine Corps

The author of the famous book and eponymous NBC TV show Friday Night Lights (2006-2011) appears to have written another blockbuster just in time for the Yuletide season. Buzz Bissinger, a Pulitzer Prize winner, tells the story of the Mosquito Bowl played in the Pacific Theatre during World War Two.

“The Mosquito Bowl was a spirited, semi-organized football game on Guadalcanal between the twenty-ninth and fourth Regiments of the Sixth Marine Division, which included a remarkable sixteen players who had either been drafted or would receive offers to play professionally. The game, played on Christmas Eve 1944 with at least 1,500 Marines watching, is both a pretext and an organizing principle for the book, but its significance fades as Bissinger explores the fates of several participants.”

In an interview on FOX News Sunday over American Thanksgiving weekend, Bissinger related much of what serves as the basis for his story, this unusual makeshift game played at Guadalcanal, a former Japanese possession that the Americans conquered and then used as a base to launch attacks against the Pacific enemy.

By late 1944 the war had tipped in the Allies favour, but the savage months that lay ahead were both anticipated and unknown. In a rivalry begun between two Marine regiments and the usual taunting and teasing that characterized military units, a football challenge match developed. Many of the Marines were college athletes, some All-Americans, but none knew that one of the bloodiest battles of the war, fought on Okinawa six months later, would be the last battle of World War Two and where many of them would see action.

One of the witnesses of the game, Neil McCallum, survives at age 94. Bissinger dedicated the book to McCallum, who watched the game from the sidelines, drinking what he described as warm beer. He seeks to keep the memory of the Marine contributions alive, hoping his fallen comrades won’t be forgotten. Bissinger gives voice through his telling of this unusual story.

As Bissinger related in the interview, playing a football game on the island of Guadalcanal, in the Pacific, on Christmas Eve 1944 was not without difficulties. Bissinger explained further, “…but in a real game, as close as they could get they built goal posts, they built a regulation field, PA system, programs…and 1500 Marines came. This is incredible, but I realized, they weren’t men who played. They were still boys. They were young. They were inexperienced. And now they are in war where you lose your boyhood very quickly. The game was a way of being boys again.”

The fact that 15 of the 65 boys who played in the game died later at Okinawa intrigued Bissinger, who believed the story deserved a book if he could find enough sources.

America maintained an isolationist position in 1940, with little interest in joining the war. A Gallup Poll taken then suggested about 79 per cent of Americans did not want to become involved in the war. Most college students (as high as 98 per cent) opposed the war. Many had felt snookered into World War One and thought this war another example of unnecessary expense of both blood and money. When the Japanese attacked Pearl Harbour, the sentiment reversed. The Marine Corps wanted the best of the best and made it a priority to attract athletes, football players in particular.

As he researched, Bissinger soon discovered that the setting and the statistics formed part of the story. Of the 1,500 Marines who watched the game, over half would die in the months to come. The Battle of Okinawa left more college athletes dead than any other battle of World War Two. And not to be forgotten, the game received attention and airtime on Armed Forces Network across the Pacific.

As for the origins, Bissinger boils it down to the competitive spirit. Football players facing military service tended to be drawn to the Marines because they liked the idea of a demanding and potentially dangerous experience. They were macho and tough and wanted combat. The two regiments started going back and forth about who was better or who was tougher. Eventually they decided that Marines don’t argue about matters, they duke it out. The idea of a game was born where they could go to battle, “have joy, have fun, beat the crap out of each other…The game ended 0-0…it was a chance for them to be boys again.”

Two of the athletes Bissinger specifically mentions, whose stories he includes in the book, are Dave Schreiner and John McLaughry. Bissinger describes Schreiner as the perfect All-American from Wisconsin. In the author’s words, “He was kind, self-effacing, he didn’t like publicity. He was handsome. A great, great man. He had a beautiful fiancee. I won’t say what happened. Maybe you can guess.” As it turns out, Schreiner had been the Big Ten Conference’s MVP in 1942 and a second round draft pick of the Detroit Lions in 1943. He could have been a phys-ed instructor holding down a cushy job, as Bissinger reiterates, but he wanted a piece of the action.

Bissinger described McLaughry, a graduate of Brown University in 1940, as “A really cerebral, interesting, intellectual man. Great, fast player. A great illustrator.” McLaughry later coached at Amherst and at his alma mater from 1959 to 1966. He lived a full life, dying in 2007 at age 90. One of McLaughry’s illustrations dawns the inside cover of the book.

In summary, FOX NEWS host Jennifer Griffin asked Bissinger what can be learned from the Mosquito Bowl? Bissinger focused on something sadly missing in America today. Unity. As he added, “Everybody served. Women served in industry and manufacturing because all the men were gone. Blacks served despite withering racism. On the line you had people from every socio-economic stripe. And that’s when you learn to deal with people, to get along with people, to love people because they did. You realize our differences are not all that different.”

From Bissinger’s lips to God’s ears, no better national message could be struck in America today as the divisions mount, the acrimony spreads, and goodwill towards others dwindles.