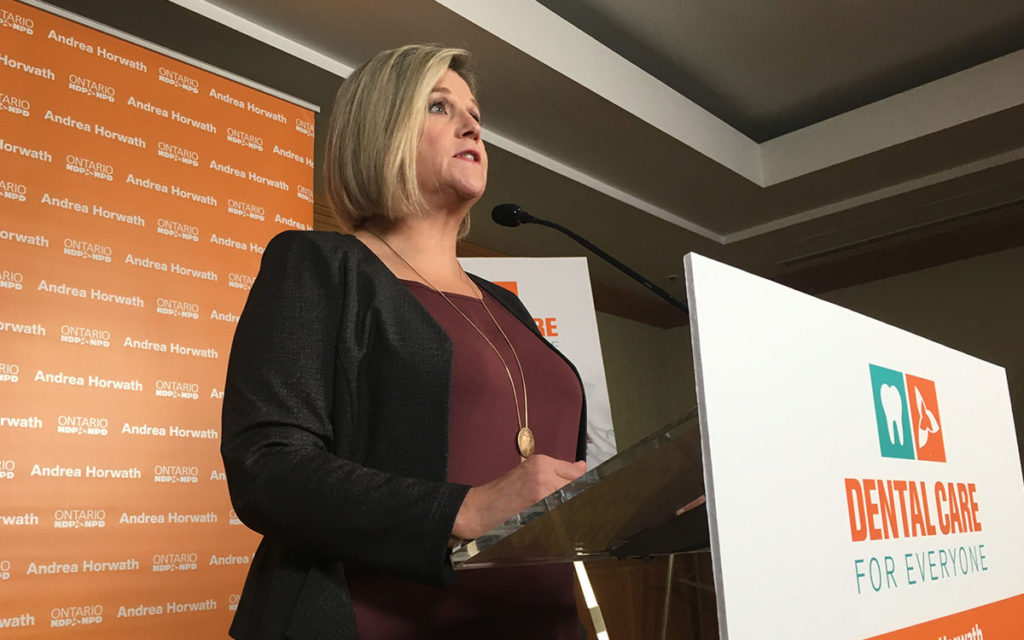 At least no one can accuse Andrea Horwath of not being left wing enough anymore.  For some time now, the Ontario Liberals have attracted New Democratic Party (NDP) voters by moving even further to the left than the traditionally leftist NDP was itself. No more! The recently-announced Ontario NDP election platform has moved so very far to the left of the political spectrum that there is now no room for anyone else on that precarious perch.

The NDP platform, announced on April 16, promises lots and lots of new spending.  Among the major and most costly promises are “free” dental care, universal pharmacare, increased social housing expenditures, reduced hydro rates and the “deprivatization” of Hydro One, the conversion of post-secondary student loans into grants, “free” child care for folks earning less than $40,000 annually and $12/day child care for the rest of us. There are many less expensive promises as well, including such high priority items as eliminating the “pink” tax which ostensibly leads to women being charged more than men for dry cleaning and the like. These promises involve added expenditures in the multiple billions of dollars as well as some doubts regarding feasibility.  For instance, many experts have debated whether the “deprivatization” of Hydro One is even possible at this point, and at a minimum conclude that it surely will be very, very costly.

But who cares if Ontario’s finances are in dire straits? As long as there are “rich” folks to tax, the NDP will be there to separate them from their money. To pay for all of this largesse, the NDP propose raising personal income taxes on those Warren Buffett wanna-be’s making more than $220,000, and increasing the corporate income tax rate from the current 11.5 % to 13%. Never mind that the recent tax hikes on the “rich” by both the federal and Ontario Liberals failed to provide the expected revenue bump to government coffers (in fact they fell short by more than a couple of billion dollars), who pays attention to facts when there’s an election to win?

While it is expected that all political parties will make some unrealistic promises in their pre-election frenzy to attract voters, what is perhaps most disturbing about both the NDP and Liberal platforms is the total neglect of any measures to actually help create the wealth they are so keen to redistribute.  At a time when our largest trading partner, the US, is significantly lowering taxes on individuals and businesses, and otherwise reducing business costs via such measures as streamlining the regulatory burden, our governments have imposed new taxes, increased business costs via more red tape, hiked minimum wages and caused sky-high hydro prices, among other things.   We are already seeing the impact of these policies in terms of poor investment growth in Ontario, income growth that is the lowest in Canada over the past decade & the highest growth in poverty of any province in recent years.  Any government that only looks at how to spend taxpayer dollars and redistribute the gains of prosperity with no regard for measures to promote future growth is laying the groundwork for future economic disaster.  Unfortunately, that seems to be the game plan of both the NDP and the Liberals in this upcoming election.

Political parties typically give their leaders two chances to show that they can either win an election or make significant gains, and if that doesn’t happen they move on to a new leader. This upcoming Ontario election will be the third for NDP leader Horwath, and her party has neither won an election nor demonstrated much growth in support under her leadership.  On June 7, we’ll see if it will be “strike 3, you’re out” for Ms. Horwath and her unrealistic pie-in-the-sky promises for Ontario.