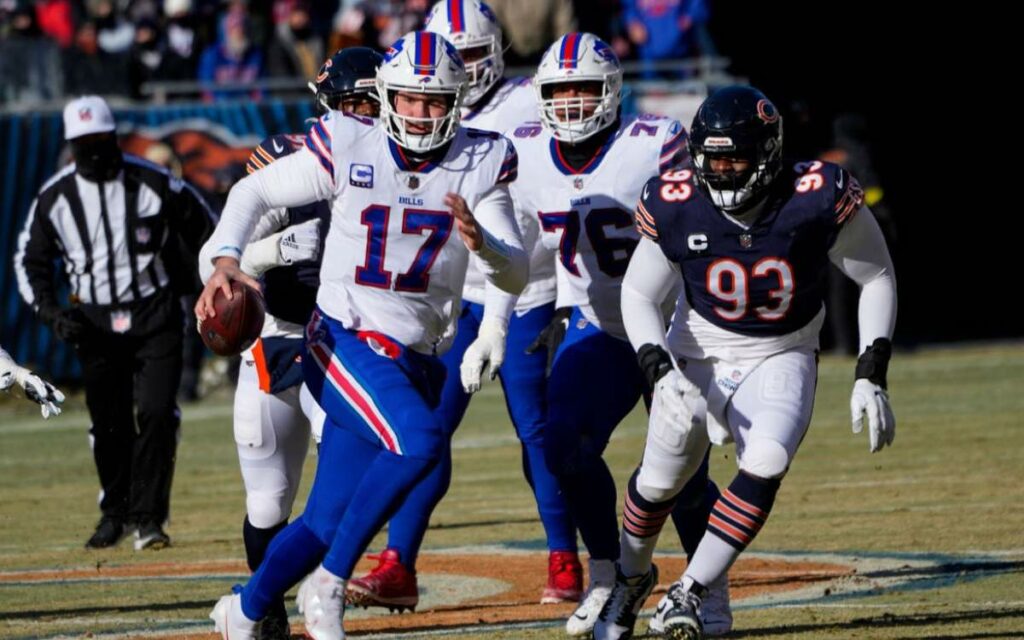 Buffalo Bills star quarterback Josh Allen (17) in action against the Chicago Bears on Christmas Eve. Allen led the Bills to a convincing 35-13 win over the Bears Saturday, and in the process helped the team secure its third-consecutive AFC East divisional title and keep the hometown squad atop the conference. Photo credit: AP/Charles Rex Arbogast

With just two weeks left in the NFL regular season, slowly but surely the playoff picture is becoming clearer.

Hard to believe that a team with a record below .500 could win their respective division, but that’s reality here in 2022.

Cincinnati at (11-4) and Baltimore at (10-5) are the other two teams to clinch postseason berths.

Three teams are in the hunt for the playoffs in the AFC.

The Los Angeles Chargers (8-6) secured their place in the postseason with a win over the Indianapolis Colts on Monday night.

The Jacksonville Jaguars (7-8) have won three in a row and now lead the AFC South.

At the other end of the spectrum, the Miami Dolphins (8-7) have lost three in a row, and are now on the outside looking in, after Tua Tagovailoa threw three interceptions in a 26-20 loss to the Green Bay Packers.

Your bubble teams to qualify for the playoffs in the AFC include four (7-8) teams New England Patriots, New York Jets, Tennessee Titans, and Pittsburgh Steelers.

The Titans have lost five a row.

Let’s get to the NFC (National Football Conference).

The Philadelphia Eagles at (13-2) continue to lead the conference standings, but have yet to even clinch their division after the Dallas Cowboys (11-4) defeated them 40-34 this past weekend.

Here’s what we do know.

The Eagles and Cowboys have clinched playoff spots, and so have the Minnesota Vikings (12-3), who have secured the NFC North Division, and the San Francisco 49yers  (11-4) who have locked up the NFC West Division crown.

Three teams in the hunt in the NFC include Tom Brady’s Tampa Bay Buccaneers who at (7-8) lead the NFC South after Christmas night’s 19-16 overtime victory against the Arizona Cardinals.

The (8-6-1) New York Giants, led by Welland born Brian Daboll, and the (7-7-1) Washington Commanders will battle it out to determine who wins the NFC East.

The Eagles will play the aforementioned Colts and Eagles to finish their regular season, while Washington will face Cleveland and Dallas.

Three (7-8) teams are considered bubble teams to make the postseason in the NFC, Seattle, Detroit, and the aforementioned Packers.

So as the last week of 2022 is upon us a site called playoffstatus.com has the (as of Monday, December 26) Philadelphia Eagles to be Super Bowl Champions at 50 per cent, followed by the Buffalo Bills at 35 per cent, and Kansas City at 32 per cent.

The Minnesota Vikings are the second favorite team in the NFC at 24 per cent.

The road to Arizona, and Super Bowl 57 on February 12, continues and The Niagara Independent will keep you posted.