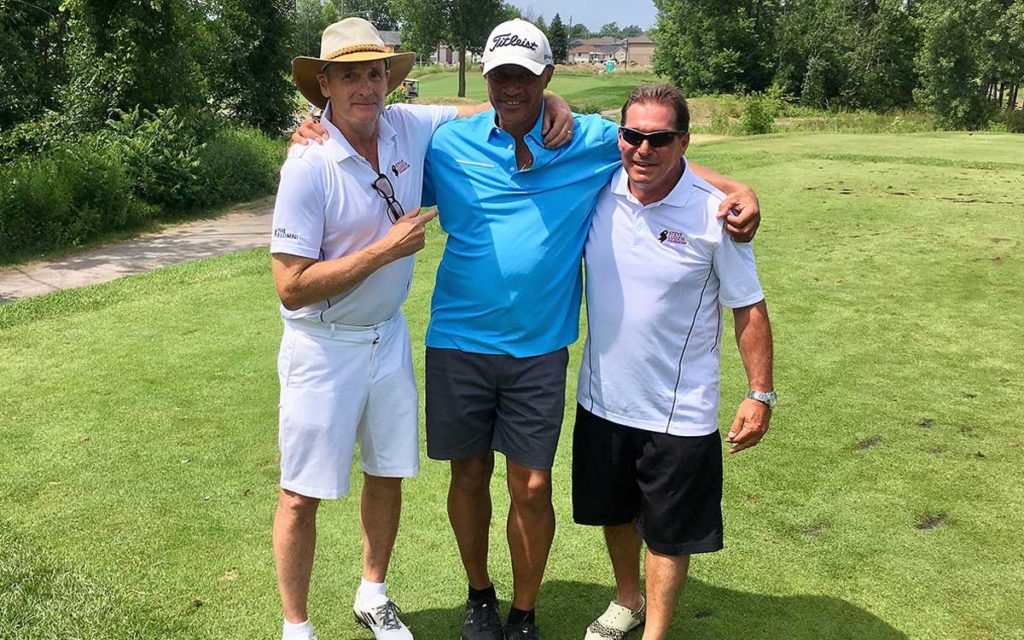 The tournament, along with Ludzy’s Charity Roast, helps sustain one of the few facilities in Canada dedicated to combating the physical effects of Parkinson’s Disease.

Former Chicago Blackhawks forward and Tampa Bay Lightening head coach Steve Ludzik, who was diagnosed with Parkinson’s in 2000, has worked tirelessly over the last decade to raise funds and awareness for the disease. He established the Steve Ludzik Centre for Parkinson’s Rehab at the Hotel Dieu Shaver Health and Rehabilitation Centre in St. Catharines.

“He’s a fighter”, said co-organizer of the tournament, Chuck McShane. “His fight inspires all of us.”

Throughout the day, Ludzik welcomed an endless stream of foursomes on the course’s eighth hole: signing autographs, snapping pictures, and hitting drives.

“Niagara is a place where everyone looks after one another”, said Ludzik. “I’m so proud of what we’ve managed to accomplish. But there’s still more to be done.”

Over 100,000 Canadians suffer from Parkinson’s. The debilitating brain disease impacts a sufferer’s movement and mobility, and can produce emotional and cognitive challenges.

Although there is no cure for the disease at present, Ludzik’s Parkinson’s Rehab Centre works to improve the quality of life for people battling the disorder.

By offering a comprehensive six-week therapy program, the clinic is able to increase the confidence and physical capabilities of its patients.

“I’ve seen people who can’t even walk in [to the centre], be able to walk out after a few sessions”, said Shawn Duff, co-organizer of the event.

On Thursday, each of the 18 holes at Thundering Waters was manned by a current or former NHL player. Amongst many others, on the tees were Dave “the Hammer” Schultz, Mark Osborne, and Daryl Evans.

Pat Graham, who played for the Toronto Maple Leafs and Pittsburg Penguins, was impressed by the retention rate of the tournament.

“I’ve been involved from the beginning. No one has ever dropped off. Each year brings back the same NHL alum and the same volunteers. It’s amazing”.

Rick Vaive, best known for being the first player to score 50 goals in a single season for the Toronto Maple Leafs, echoed his 1983-84 teammate.

“The same guys always manage to make it out. It’s nice to see old friends”, said Vaive. “But more importantly, it’s nice to help with such a great cause. Ludzy’s done so much for the community”.

Ludzik’s foundation has donated close to $1,000,000 in support of the rehab centre that bears his name.

“Every dollar made from the tournament goes right to the people who need it”, explained Duff.

The SiriusXM radio host, who has been friends with Ludzik for nearly two decades and introduced the former Blackhawk to the television business, said that few other events compare to Ludzy’s Charity Golf Classic.

“I’ve attended a number of charitable functions over the years. This event represents the cream of the crop”, said Kouleas.

In line with his philanthropic, community-centric spirit, Ludzik plans to dedicate himself to local politics for the foreseeable future: running for Niagara Falls City Council in October’s municipal election.