Niagara and the political legacy of the Rt. Hon. John N. Turner 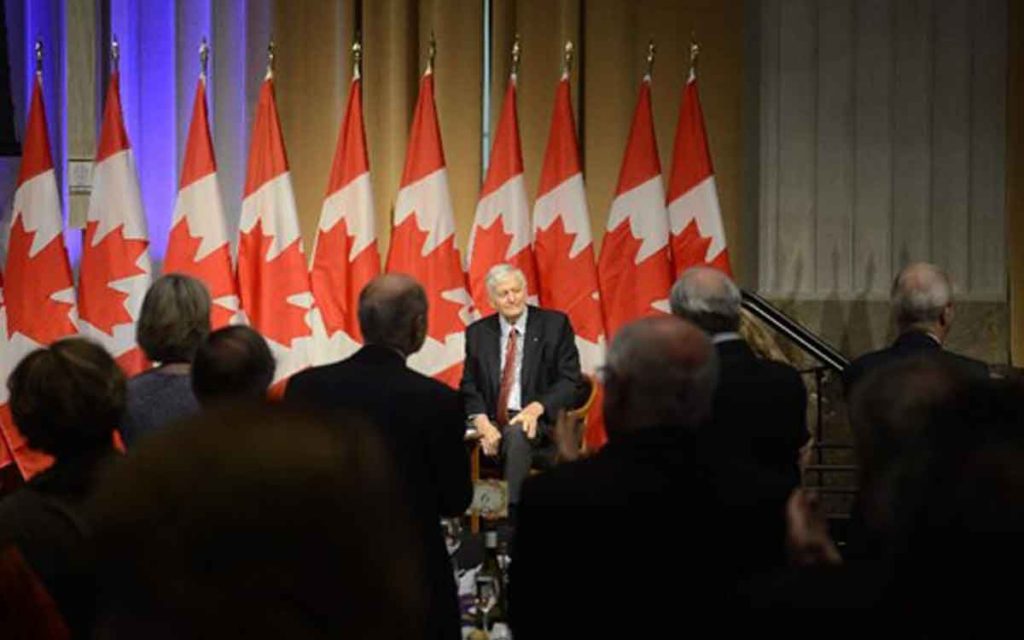 Niagara is a big part of the legacy of former Prime Minister John Napier Turner – he has helped grow her fortunes by attracting major international business while in private practice as a  lawyer and in his public role as MP; he’s been a prominent voice for her cultural and agricultural attractions like the Shaw Festival and many, many wineries.  More importantly John Turner has many friends and associates from Niagara.  Most especially he is a stalwart champion for water – the most famous attraction in Canada being Niagara.

In June of this year, Canada’s 17th Prime Minister and one of her most prolific elected politicians celebrated his 90th birthday.  In the case of John Turner, most of what he’s accomplished in the nine decades of his extraordinary life is significance beyond the pale.  His 90th birthday party, co-chaired by the writer and Lisa Haley  (both Lisa and I were staffers for Turner on Parliament Hill 1984-1990). Those years was the era of free trade, of constitutional debate and when Confederation became mature –  most importantly it was widely hailed as the last and best times known in Canadian politics.

Given the run up to the federal election this fall, Mr. Turner’s birthday celebration marked an occasion of civility and bi-partisanship that heretofore had not been seen in Canada for years.  In fact, the occasion was marked by the presence and participation of every former Prime Minister of Canada and the current Prime Minster – the first time in the history of Canada.  At no other time in Canadian history have every and all living former Prime Ministers attended the same event.  But then again, it’s John Turner – he’s the dean of all former Prime Ministers and, without hyperbole, the most celebrated.

Rhodes scholar, Olympic athlete, accomplished lawyer and politician.  He once dated royalty, advised Popes, played touch football with the Kennedy’s and negotiated with Presidents and other world leaders in a spectacular political career that spanned 50 years.

And he’s still going. He’s 90 years old in 2019 and even when he was in his mid-80’s he continued to paddle Canada’s lakes and rivers in every corner of the country. The public John Turner is known for his accomplishments as an elected official having been elected in three provinces – a first in Canada and never repeated.  He was first elected in a Montreal riding in Quebec in 1962 – was re-elected in an Ottawa riding in Ontario in 1968 and was again re-elected in a Vancouver riding in BC in 1984.  He served in the Cabinets of Prime Minister Lester B. Pearson and Prime Minster Pierre Trudeau in the 1960’s and 70’s.  He ran to be Leader of his Party in 1968 losing to Trudeau yet replaced him as Leader when he ran and successfully won the leadership in 1984. Of course, the election outcome in 1984 saw the rise of Prime Minister Brian Mulroney, but Turner and Mulroney were worthy advocates fighting two elections at a time when Canada was punching way above its weight. The debates of the 1980’s on Free Trade and constitutional oversight for Canada were legendary – Turner characterized them as the fights of his life.  Books have been written about that political era as the “last best”.

What many don’t know is that the private John Turner is equally as accomplished.  And he’s been quietly effective. He is known by many in Lake of the Woods (Kenora) where his family’s summer retreat is located as its best steward of the waterways in that area.  In fact, it was John Turner who encouraged the International Joint Commission(IJC) , a US/Canada treaty organization mandated to oversee inland waterways between Canada and the United States, to commit the Lake of the Woods waterway to jurisdiction of the IJC thereby ensuring appropriate funding for its clean-up and protection.

Water is his passion – he is the only Canadian to have paddled every lake and river in Canada – an accomplishment that has been recognized by the Royal Geographic Society.  He is the architect of the most recent treaty on the Columbia River signed in the late 1960’s.  He and then Senator Hillary Clinton (his close friend)  signed the 100th anniversary charter for the IJC in 2012 on the bridge that spans the Niagara River in Niagara Falls.  He was appointed by then Prime Minister Portia Simpson of Jamaica as the Chairman of the Jamaica-Canada Disaster Relief and Resilience Initiative recognizing his expertise on resilience in the face of disasters that may befall the Caribbean.  It was that initiative that set the staging area for Canada’s effective role in managing the first response after the earthquake that struck Haiti in 2010.

In more recent years, Prime Minister Turner has lent his name and caché to an award for students at Brock University and Niagara College studying and demonstrating leadership for water.  That award grant continues to this day and will likely growing with the establishment of a permanent institute of water proposed in Niagara Region.

Most of these exploits were recounted at his birthday celebration in Ottawa this month. Prime Minister Justin Trudeau led the evening off with candid remarks to the politically awesome assembly of well over 200 invited guests about his personal and lifelong friendship of Mr. Turner.  The Speaker of the House of Commons, the Hon. Geoff Regan, introduced Mr. Turner while Turner’s daughter,  Elizabeth, offered poignant words on behalf of the Turner family.  Former PM’s Joe Clark, Paul Martin and Jean Chretien provided extraordinary oratories on their relationship Mr. Turner, while former PM’s Mulroney, Campbell and Harper all provided wonderful video tributes.  Media greats Lloyd Robertson, Peter Mansbridge, Guy Gendron and Don Newman were on-hand to introduce the former PM’s and the evening ended with special introductions of noted Canadians attending like Ed Broadbent, Irwin Cotler, former Premiers David Peterson and Frank McKenna.   Of special note was the reading of a personal note from Her Majesty Queen Elizabeth – welcoming her good friend John Turner (who once dated her sister Margaret) to the 90’s club.

Social media has been abuzz characterizing his 90th birthday party as one of the best political events Ottawa had ever witnessed.  Media reports in major dailies by those reporters in attendance were equally as effusive.  A befitting tribute to a great Canadian who is a living witness to some of the best of Canada – and more to come. 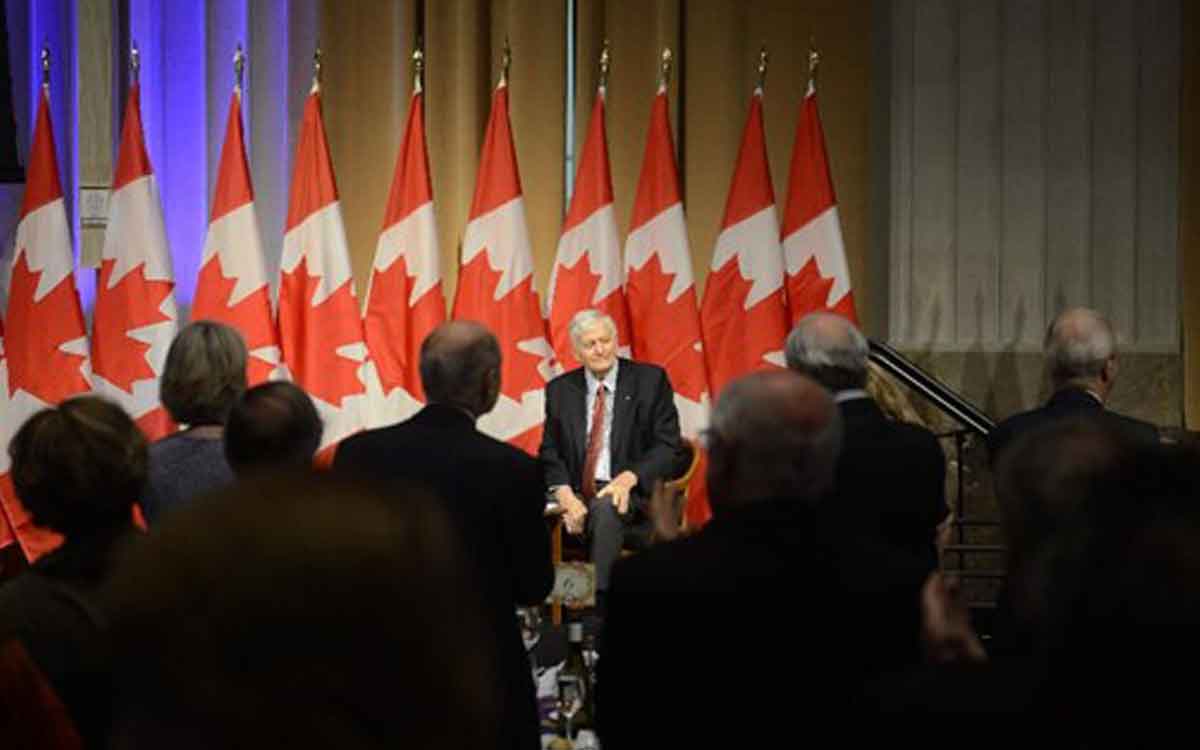