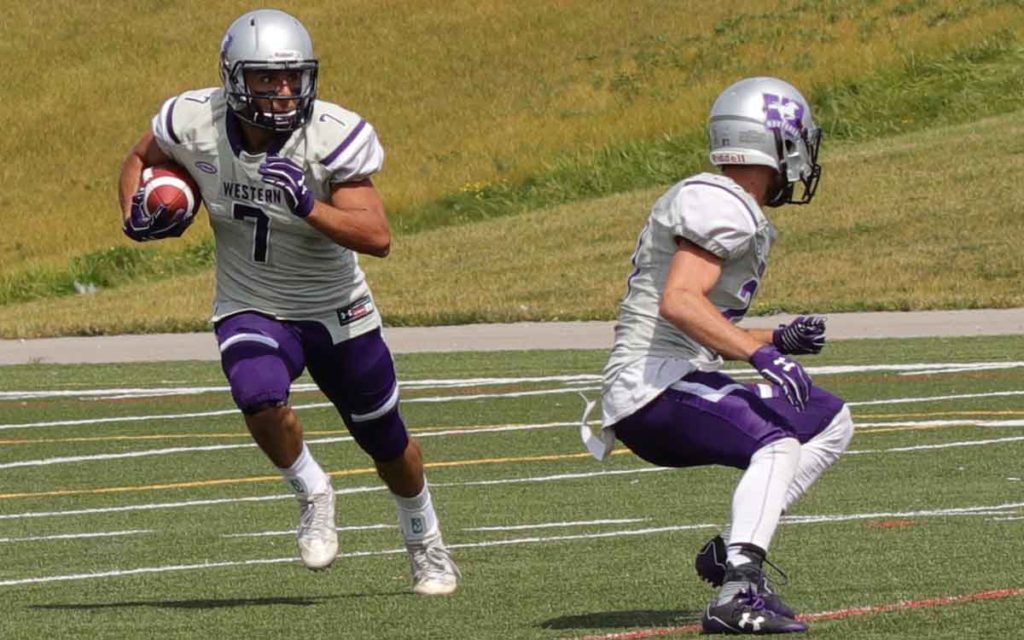 Cole Majoros from Fort Erie (#7) is one of five players from Niagara suiting up for the Western Mustangs as the team battles for a national championship this weekend.

On Saturday, Canada’s two best collegiate football squads will square off in a rematch of last year’s Vanier Cup.

In 2017’s national championship, the Western Mustangs defeated the Laval Rouge et Or 39-17.

Since last November’s contest, both teams have gone undefeated, dominating their respective conferences.

The defending champions will look to once again overwhelm the perennial powerhouse Rouge et Or on offence; this time, though, in front of what will be a hostile Quebec City crowd.

Led by one of the country’s most successful university sports coaches, Greg Marshall — who has won more trophies and accolades (including a Grey Cup) than virtually all of his counterparts in Canadian football — the Mustangs have a chance to become back-to-back Vanier Cup winners for only the sixth time since the championship’s conception.

Although Western boasts a nationwide roster, fielding players from British Columbia to Nova Scotia, the Niagara Region is well represented on the team, particularly in offensive skill positions.

At present, a total of five athletes from the area are active members of the Mustangs 2018 squad: Cole Majoros from Fort Erie, Harry McMaster and Jacob Andrews from Niagara Falls, and Antonio Valvano and Eli Sacco from St. Catharines.

Valvano, a third-year fullback, and Sacco, a second-year linebacker, each recorded multiple touches and tackles in 2018.

Majoros, McMaster, and Andrews all experienced more regular play, however, and were team (and league) stand-outs throughout the entire season.

Andrews, a young defensive back from A.N. Myer Secondary School in Niagara Falls, averaged 3.8 tackles per game during his first season on the field for the Mustangs. In the three post-season matchups Western’s played thus far, Andrews has recorded 16 total tackles.

Prior to attending university, the former Marauder played junior football with Team Ontario and Team Canada.

Majoros, who joined the Mustangs from Lakeshore Catholic High School in 2014 as a wide receiver, played in every regular season game in 2017 and 2018. This past season, the Fort Erie native recorded three touchdowns and finished 28th in the OUA for average receiving yards per game.

Back in 2012, Majoros helped lead the Lakeshore Catholic Gators to an OFSAA Golden Horseshoe Bowl championship.

This past season, McMaster recorded the second most receiving touchdowns in the entire OUA, with seven. He also finished 10th in the province for average receiving yards per game.

As the lone senior Mustang from Niagara eligible to turn pro, McMaster was selected 53rd overall in the 2018 CFL Draft by the Edmonton Eskimos.

Tune in Saturday, Nov. 24 to watch some of the region’s best sports talent go for gold.

Kickoff is set for 1:00pm. The game will broadcast live on Sportsnet.