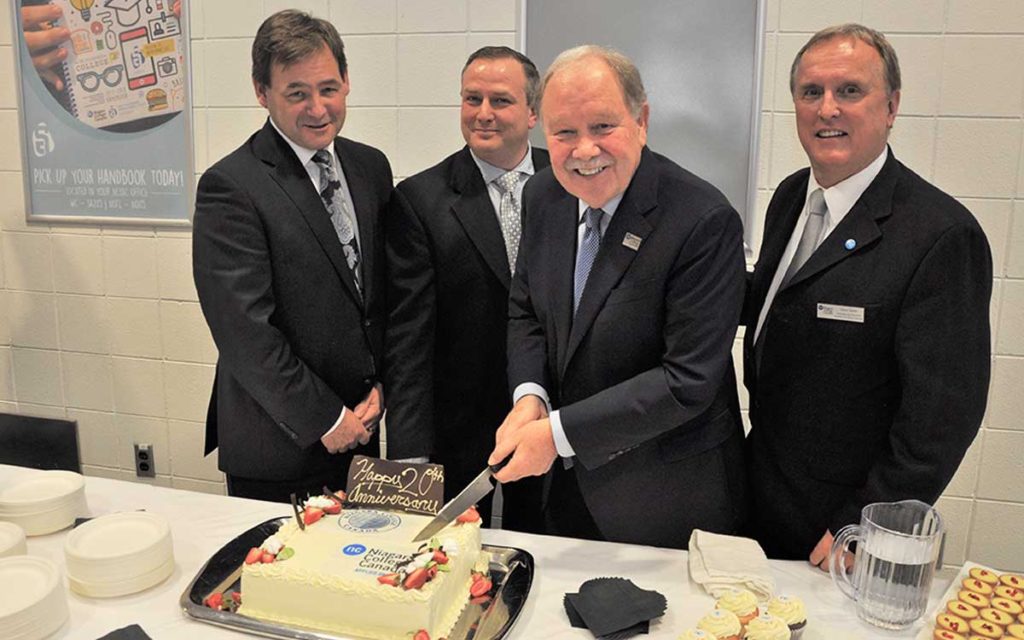 From left: Regional Councillor Bart Maves, who at the time of the NOTL Campus opening in 1998 was MPP for NOTL and Niagara Falls, 1998 Student Administrative Council president Don Woodruff, NC president Dan Patterson and associate vice-president, academic and learner services Dave Taylor celebrate the 20th anniversary of the Niagara-on-the-Lake campus.

Alongside the ceremonial cake cutting and requisite blue and white balloons, a handful of dignitaries and school officials addressed a crowd of listeners to commemorate the occasion.

Patterson recalled some of the star-studded visitors who have toured the campus in the past, including two prime ministers and a prince. Justin Trudeau visited the college as recently as August 2017.

Niagara College, as Patterson pointed out, has successfully established many national “firsts” throughout the years. The school launched Canada’s first commercial teaching winery in 2002, as well as Canada’s first teaching brewery in 2011 and first teaching distillery this year. And just last month, the college started the country’s first commercial cannabis production program.

Reading a letter provided by the former premier, Maves congratulated the college on it’s anniversary and said, “I am so proud to see how the Ontario government’s decision to provide a $32 million grant to build the campus during challenging economic times was an excellent investment”.

Following its 1995 victory, the Ontario PC Party inherited the massive deficit created by over five disastrous years with Bob Rae’s NDP in power.

To temper the province’s growing debt that was nearly tripled during Rae’s time in office, Harris implemented sweeping reforms that saw deep tax cuts, a profound decrease in spending, and broad bureaucratic reduction across government institutions.

Harris’ Common Sense Revolution, did not leave much room for supplementary funding of nonessential building projects.

However, after a groundswell of support for the new campus and the persuasive powers and persistence of local MPPs like Tom Froese, the government ended up agreeing to a $32 million contribution.

At the ribbon cutting 20 years ago, Harris opined that the Niagara-on-the-Lake campus would no doubt become a “showplace…for the community and the province”.

Since opening in October of 1998, Niagara College’s Glendale location has graduated thousands of students, from award-winning brewers to industry-leading beekeepers.

Many of its programs are internationally recognized and offer students the opportunity to hone their skills in state-of-the-art facilities unmatched anywhere else in the world.

Niagara College is consistently ranked as one of the best colleges in Canada and its reputation only improves with every passing academic year.

Without question, the commitment made by the Harris government to the community 20 years ago was, as the former premier said, “an excellent investment”.