Niagara IceDogs officially in the running for hosting 2024 Memorial Cup 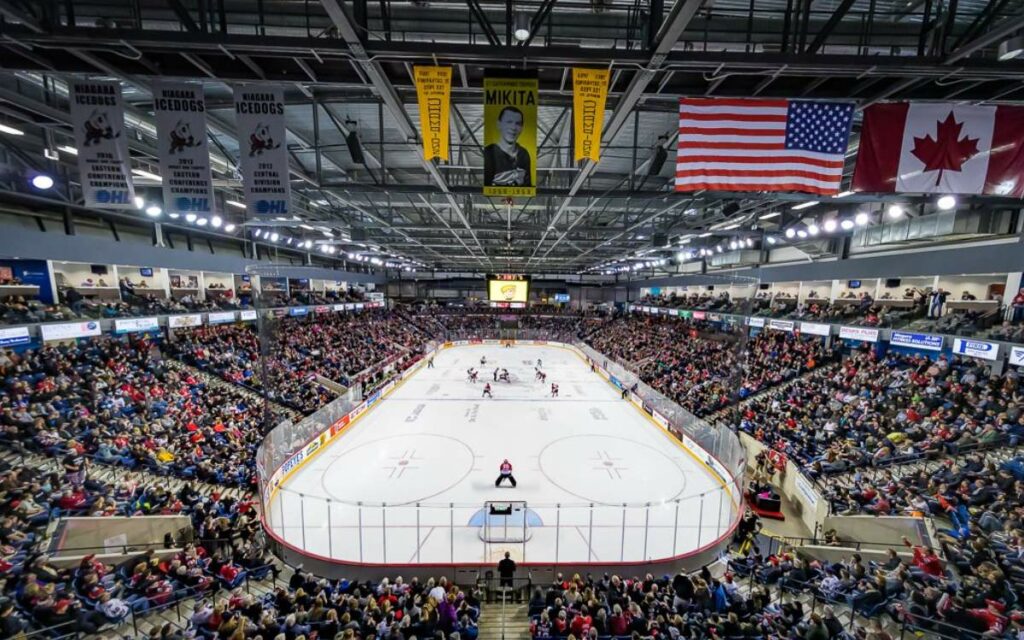 With the capacity, proper accommodations in place, and collective will, St. Catharines seems like the natural front-runner in the four-city race. Pictured is inside the Meridian Centre. Photo credit: Facebook/Meridian Centre

The Canadian Hockey League (CHL) made it official on Wednesday, naming the Niagara IceDogs one of four finalists to host the 2024 Memorial Cup.

The Memorial Cup is the national championship of the Canadian Hockey League, which consists of three major junior hockey leagues operating in nine provinces across Canada and four states in the U.S.

Niagara is up against two other Ontario based teams in Kingston (Frontenacs) and Sault Ste. Marie (Greyhounds), and Saginaw (Spirit) out of Michigan.

“We are excited to have four diverse communities express their interest to bid for the 2024 Memorial Cup presented by Kia,” said Dan MacKenzie, President of the Canadian Hockey League.

“The Memorial Cup is a great hockey tradition that not only celebrates the best in junior hockey but also honours the brave men and women who served and continue to serve our country.”

“We are very excited to bid on this prestigious event. We are very hopeful that we will be awarded this and bring the tournament to the Region that so richly deserves it.”

At first glance, St. Catharines and the Meridian Centre (home of the IceDogs) and the Niagara Region as a whole appears to be a no-brainer with location, hotels and restaurants.

Let’s break down the four finalists.

“I’m excited by the steps taken by the IceDogs to submit a bid for the Memorial Cup, and the City of St. Catharines stands ready to work with the IceDogs to make the bid a reality,” said Siscoe.

“The opportunity for Niagara to be showcased on the national stage is one we are proud to be a part of.

We’re looking forward to once again playing host to Canada and showing off the world class investment we made with the Meridian Centre in downtown St. Catharines.”

“There is no better centre of enthusiasm for junior hockey than Niagara,” Bradley said. “We’ve got a first-rate rink, a long history and tradition with Junior A hockey and a huge fan base that will ensure a capacity crowd every game.

Plenty of top-notch hotel accommodations and high-quality restaurants as well as natural attractions will draw fans from afar to our community.

Experience in hosting national sporting events and a large number of enthusiastic volunteer cohorts will ensure success. We will do junior hockey proud as hosts.”

DaDobbelaer, along with City and Regional staff will now gather to put an official bid together.

The next deadline in the process is January 31, 2023, which is when teams will be required to have their bids submitted with the final decision on the host being made in March of 2023.