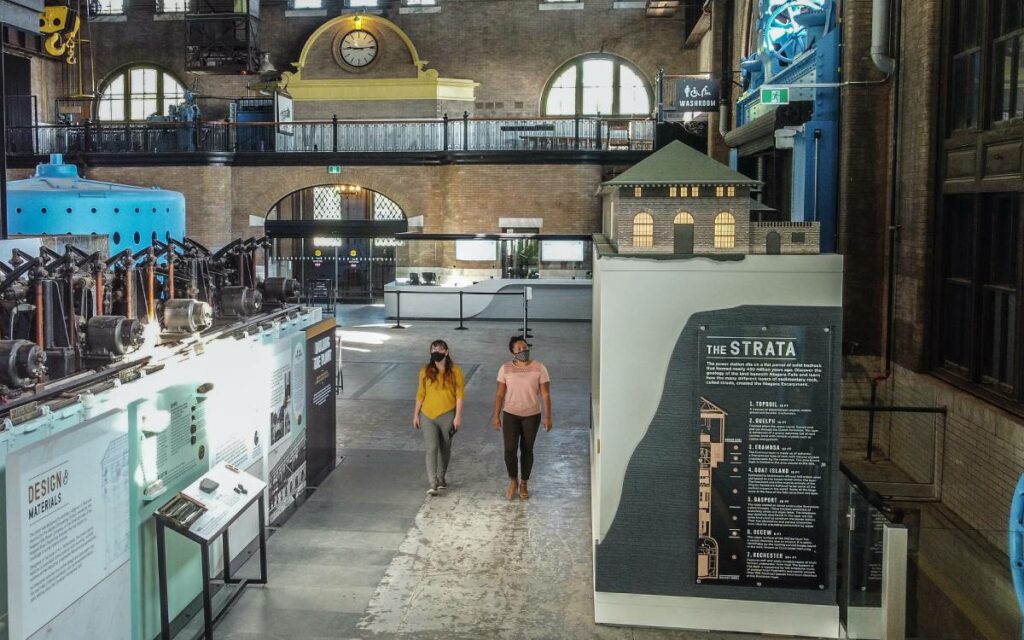 Created in 2006, the award is an annual juried honour administered by the Ontario Heritage Trust to recognize remarkable achievements in heritage conservation across the province.

“The Trust is pleased to join the Lieutenant Governor of Ontario in recognizing these remarkable individuals, organizations and communities for their achievements in conservation,” said Chair of the Ontario Heritage Trust John Ecker. “Their contributions showcase the diversity of the province and foster a better understanding of our shared heritage.”

Seven projects were recognized for their contributions to ‘Excellence in Conservation’ in 2021, including the adaptive reuse of the Niagara Parks Power Station.

Opened to the public this past summer, the $25 million project transformed a decommissioned hydroelectric power plant into a new educational, interactive tourist attraction.

Located kitty-corner to the Horseshoe Falls along the Niagara Parkway, the former Canadian Niagara Power station was built in 1905 and is the only era-specific, fully intact structure of its kind left in the world.

It provided power to nearby Fort Erie, Ontario and Buffalo, New York up until 2006, when it was decommissioned.

Chair of the Niagara Parks Commission April Jeffs, who accepted the award last week, said the agency went to great lengths to preserve the historical integrity of the building and that it was an “honour” for the Parks to be recognized for its hard work.

“The heritage conservation of the Niagara Parks Power Station continues to be the first consideration in all decisions related to the adaptive reuse construction, which makes receiving this award so special,” said Jeffs.

“Before any construction was undertaken at the site, a comprehensive strategic conservation plan was undertaken with every artifact and architectural feature assessed and documented. When visitors walk into the station today, they enter into the historic generator hall that in many respects is untouched from its construction over 100 years ago.”

The turn of the 20th century saw a race to populate the shores leading to the Falls with hydroelectric facilities that could power an increasingly energy-hungry society. The former Canadian Niagara Power station was one of several built on both sides of the Niagara River in the early 1900s.

The Niagara Parks Power Station’s July 2021 opening represented the first of two phases in the project’s overall unveiling. At present, visitors can explore the upper portion of the generating station, but come this July, guests will also be able to traverse the underground network of tunnels that lie 200 feet below the main floor of the building.

It’s estimated that the attraction will welcome 1.7 million visitors and produce a $22 million net surplus before interest and depreciation in its first five years of operation.

“The success of the Niagara Parks Power Station is an exceptional example of agency collaboration in action,” concluded Jeffs.

Late last year, the agency approved a three-stage procurement process to facilitate the redevelopment of the Toronto Power Generating Station and the Ontario Power Company Generating Station, sending out an initial Request for Information (RFI) on Nov. 8, 2021.