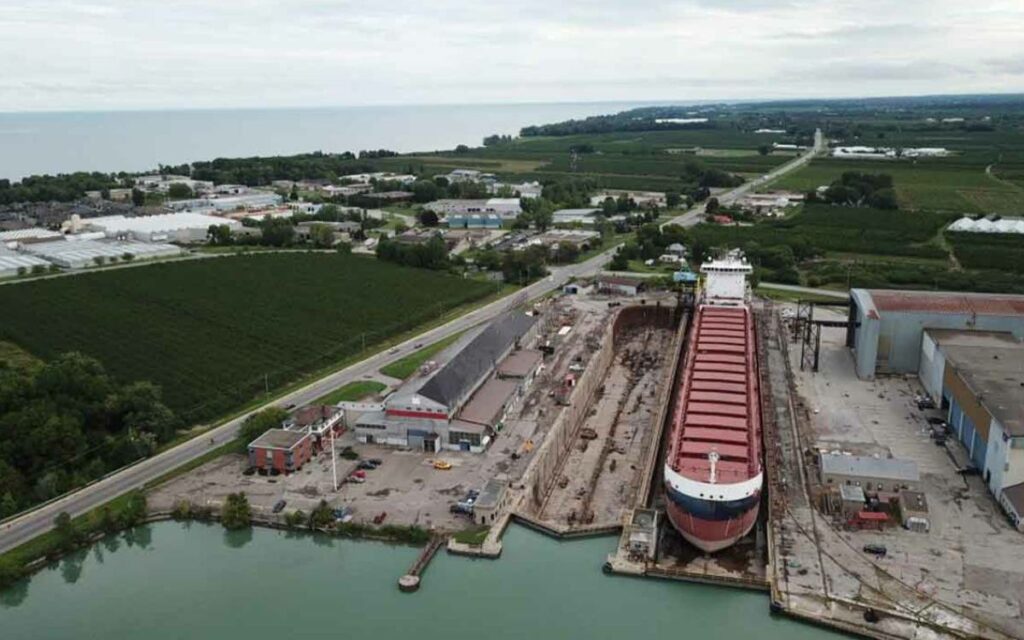 Ontario Premier Doug Ford was in Hamilton yesterday providing his daily updates. While the announcement was made in the Steel City there was a Garden City tie to the news.

Ontario-based Heddle Shipyards has entered into a new long-term agreement with Vancouver-based shipyard Seaspan to fabricate Ontario-made ship components under the National Shipbuilding Strategy. This will have a positive impact on Heddle’s St. Catharines shipyard at the Port Weller dry docks.

The Premier said the government has taken significant steps to make the province more attractive to businesses and manufacturers like Heddle Shipyards. The government claims that lowering job-killing electricity prices, investing in the skilled trades, and providing tax relief, has helped create an environment for future investment, job creation and a strong economic recovery.

“I want to congratulate Heddle Shipyards on this long-term agreement, as it cements Ontario’s position as one of the best places in the country for major manufacturers to compete, succeed, and grow,” said Premier Ford. “This historic partnership with Seaspan will create highly skilled, well-paying jobs in communities across the province, contribute to the construction of quality, Ontario-made components for these ships, and reinforce Hamilton’s status as a critical transportation hub in the province.”

Over the next decade, Heddle Shipyards will be the primary supplier for ladders, gratings and handrails for the JSS 1 (currently under construction), JSS 2, and an Offshore Oceanographic Science Vessel. These components will be manufactured at their facilities in Hamilton, St. Catharines, and Thunder Bay, creating jobs across Ontario’s advanced manufacturing supply chain. These projects will generate tens of millions of dollars in economic activity in Ontario, employ at least 50 workers, and create the potential for additional opportunities, such as supplying larger ship modules in the future.

Seaspan and Heddle have also partnered to bid on the construction of the Polar Icebreaker for the Canadian Coast Guard. If won, Heddle will support the construction through its modular fabrication program.

“This agreement marks a significant moment for our company and the Province of Ontario,” said Padulo. “We are extremely proud that Ontario Shipyards will play an increasingly significant role in the National Shipbuilding Strategy and grateful for the opportunity to support Seaspan Shipyards, the Canadian Coast Guard and the Royal Canadian Navy.”

The City of Hamilton was recently designated as a Foreign Trade Zone by the federal government, joining Niagara and Windsor. Foreign Trade Zones (FTZs) attract new investment and encourage Ontario and Canadian businesses to expand internationally by providing local businesses with access to tariff and tax exemption programs, while importing materials or goods.

“As we all deal with the day-to-day anxiety and impacts of COVID-19, it may seem ambitious to talk about recovery,” said Minister Phillips. “For Ontario to recover, we need strong, sustained economic growth. We cannot expect our economy to just bounce back and the lost jobs to return on their own. We need to start working on recovery now.”

“The contract signed by Heddle Shipyards is a tremendous opportunity for workers in Hamilton and the surrounding region,” said Parliamentary Assistant Skelly. “It will also help revitalize the shipbuilding industry in Ontario