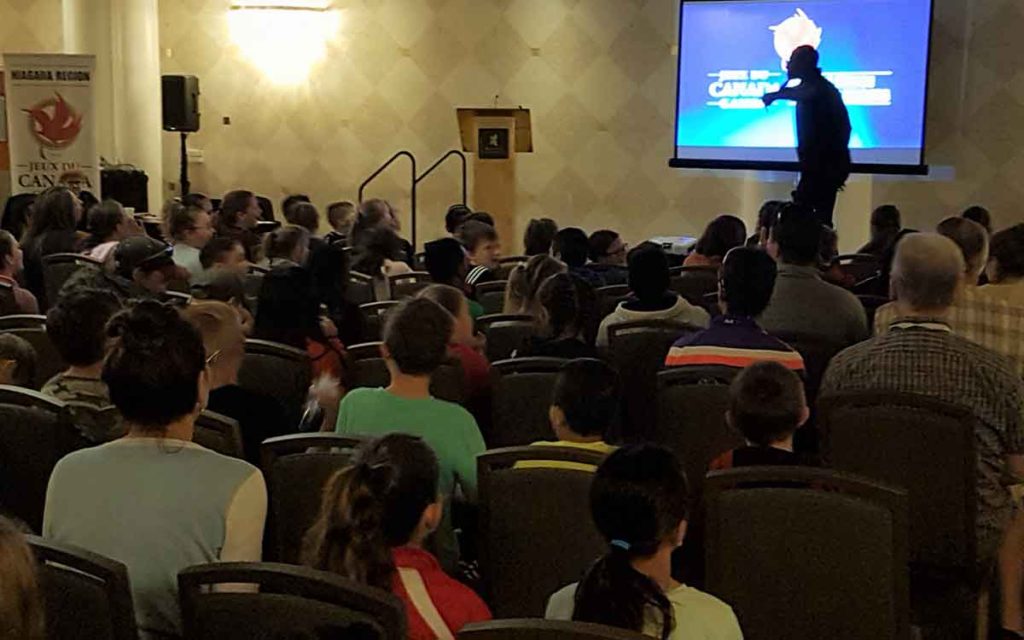 Bawe Nsame hits the stage to get the students fired up for Canada Summer Games 2021.

They were loud, enthusiastic and united.

About 200 kids from five different Niagara elementary schools filled a conference room at White Oakes Resort and Spa yesterday morning to learn how they can potentially be the one who names and/or designs the mascot for the upcoming Canada Summer Games 2021 to be held in Niagara.

The information session quickly turned into a Summer Games pep rally with emcee Bawe Nsame whipping the crowed into a frenzy. Students and teachers alike chanted, clapped and cheered their way through the session.

The pumped up students were told there will be 5,000 of Canada’s best athletes representing every province and territory descending on Niagara for two weeks. The games will be run with the help of some 4,000 volunteers.

A short inspiring video showing images of rowers, basketball players, wrestlers as well as iconic Niagara scenery including images of Niagara Falls drew plenty of “oohs” and “ahhs” from the youthful audience.

Niagara Centre federal member of parliament Vance Badawey was the lone politician to speak. “We will be front and centre,” he told the students. He said hosting the Summer Games will give Niagara a great chance to show the rest of Canada Niagara’s history and heritage.

Before Badawey left the stage he asked the students what the Canada Games means to them. “Happiness,” replied one student. “A chance to get together,” said another.

Steve Katzman, chief revenue and marketing officer for the Games, took to the stage to talk about why the students were gathered together – to design and name the mascot for the 2021 Canada Summer Games.

“Do you know what day it is,” Katzman asked the audience. “Thursday!,” one student hollered out to laughter from the audience. Katzman said while the student is indeed correct it is also World Turtle Day; fitting, because the mascot for the Summer Games will be a turtle. Katzman then lead the kids in a thunderous chant of, “turtle! turtle! turtle!”

“We need your help to create, design and name a turtle mascot,” explained Katzman. A video narrated by local magician and actor Alex Kazam explained the significance of the turtle to Niagara. Some of those reasons included the fact that there are eight different species of turtles in Niagara, the inner shell has 13 sections coinciding with Niagara’s 13 municipalities and the 13 provinces and territories in Canada and turtles are known as guardians by indigenous peoples.

The only name that can’t be submitted, the students were told, is Sonny. That’s because a turtle named Sonny went over Niagara Falls in a barrel with its owner, George Stathakis on July 5, 1930. Sonny survived.

The Games’ Senior Manager, Marketing and Community Development, Vittoria Wikston, explained the process of how kids can submit their names and designs. She said it will be the first games where the submission process will be completely digital.

Children can enter both the name the mascot contest as well as the design the mascot contest. Kids can also submit more than one name or one design. The contest is open now and the winning submissions will be announced this September.

If the rest of Niagara displays the passion and enthusiasm that these kids showed, then Niagara just might very well host the best games ever. 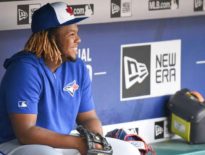 Sports From the bleachers 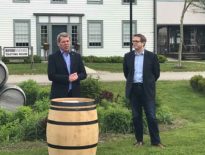