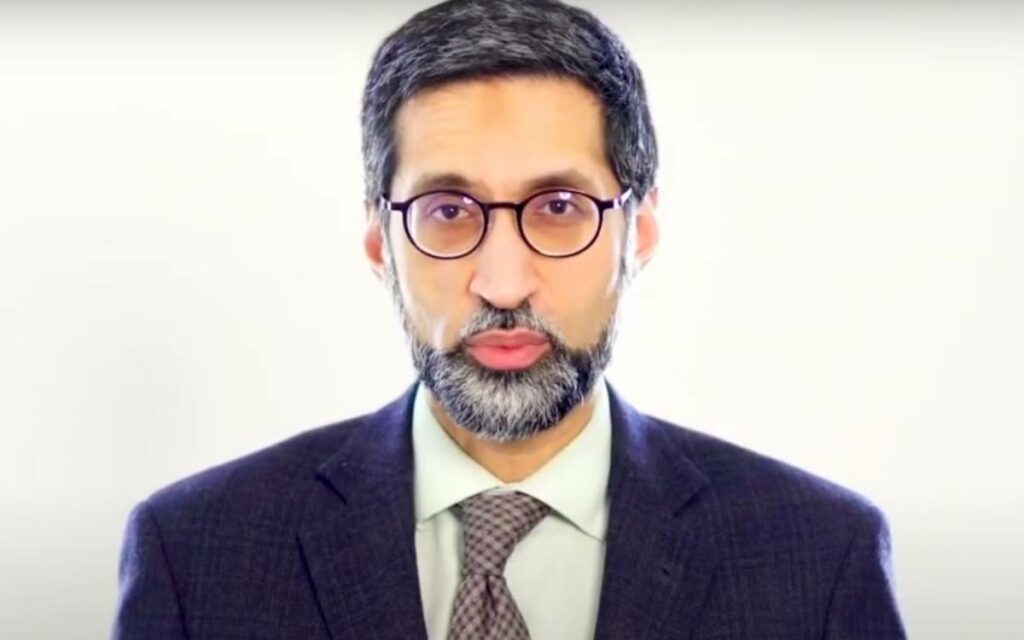 It’s not the first time the region’s acting medical officer of health has been at odds with the province. Photo credit: YouTube/BrockTV

The Mississauga doctor asked: “Who else agrees that Ontario’s decision to drop the vaccine passport today…is a mistake?”

In response to the inquiry, Niagara’s acting medical officer of health Dr. Mustafa Hirji quote tweeted an emoji figure raising its hand, as well as posted a link to a press release from Niagara Public Health.

If the raised hand to Dr. Arya’s question wasn’t enough to signal his displeasure with the province’s pace of reopening, it’s clear from the recommendations in the press release that Dr. Hirji is, once again, offside with the premier’s pandemic advisory team and Ontario’s chief medical officer of health.

​“As Ontario drops many of its COVID-19 public health measures contained in the Reopening Ontario Act,” the press release begins, “Niagara Region Public Health remains mindful that there is still very high transmission of COVID-19 in the community, and that the risk of infection will grow as social activity increases.” Thus, the release states, “Public Health strongly recommends that organizations maintain proof-of-vaccination and employee vaccination policies.”

This strong recommendation for Niagara businesses to keep the vaccine passport system in place despite discontinuation by the province appears to be unique amongst Ontario’s 34 public health units.

To be sure, a handful of units around the province make vague recommendations to remain “vigilant”, while others remind residents that businesses still have the authority to voluntarily ask for proof of vaccination. Though, in terms of a forceful, explicit recommendation made via official channels for businesses to maintain the vaccine passport system, Niagara seems to stand alone. At the very least, it’s only one of a few public health units in the province to take such a hardline.

Dr. Hirji, in his personal statement attached to Tuesday’s press release, goes so far as to praise the businesses who have elected to keep the passport system in place.

“Maintaining common sense precautions like vaccination, masking, staying home if sick, and vaccination policies will keep us safe through future waves,” says Hirji, “I applaud the many organizations who are continuing with proof-of-vaccination and strongly recommend the maintenance of workplace vaccination polices.”

Going one step further, Hirji says not only should businesses maintain their proof of vaccination policy, but they should also require three vaccine doses for entry.

“Further,” the press release reads, “in order to align proof-of-vaccination requirements with the current science on vaccinations, Acting Medical Officer of Health Dr. Mustafa Hirji has called on the provincial government to incorporate booster doses into their proof-of-vaccination QR code system.”

Yet for Niagara’s head of public health, this is nothing new.

Several times throughout the pandemic Hirji has maintained, put in place, or “strongly recommended” measures above and beyond provincial regulations.

In January, for example, Hirji drew the ire of residents and public officials, including Ontario’s chief medical officer of health Dr. Kieran Moore, when he advised local school boards to, amongst other things, continue to dismiss entire cohorts of students for seven days following a test-confirmed COVID-19 infection, a measure that was no longer used anywhere else in the country.

“You are aware that Niagara is the only jurisdiction in Ontario or Canada to continue this practice in the face of the increased transmissibility of the Omicron variant,” wrote Moore in a leaked letter to Hirji at the time, “and that the negative consequences of school dismissal and closure are significant to the mental, physical, social and educational wellbeing of children and youth.”

Ontario entered its ‘Roadmap Exit Step’ on Mar. 1, 2022, which lifted all remaining capacity limits and proof of vaccination requirements. Dr. Moore said on Thursday that the province anticipates “removing mandatory masking by the end of March if the trends continue”.