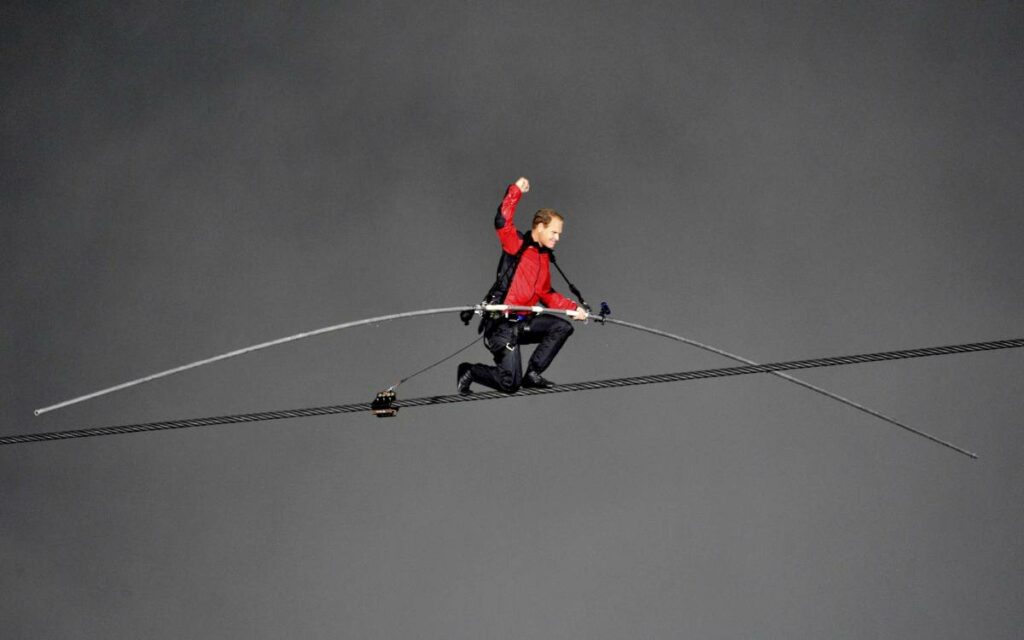 Wednesday, June 15 is the 10-year anniversary of the daredevil’s momentous tightrope walk directly over Niagara’s world-famous falls. To celebrate, Wallenda will be in town for a special ceremony at the Table Rock Centre, where he will give remarks and officials will unveil a limited-time commemorative display. Photo credit: Reuters/Mike Cassese

This Wednesday marks exactly 10 years since American daredevil Nik Wallenda awed the world by walking 1,800 feet across Niagara Falls on a high wire, the first time in history anyone’s braved the wind and mist directly above the wonder’s surging waters.

To celebrate the occasion, the Niagara Parks and City of Niagara Falls are co-hosting a special ceremony on the east side of Table Rock Centre at the brink of the Horseshoe Falls, near the very spot where the record-breaking high wire artist finished his 2012 crossing.

Wallenda himself will be in attendance and provide remarks at the event, which will also include comments from dignitaries and the official unveiling of a new limited-time display created by Ripley Entertainment.

Mayor of Niagara Falls Jim Diodati, who played an integral role in helping the historic feat come to fruition a decade ago, said after Wallenda demonstrated interest in an anniversary event earlier this year, he talked to Ripley’s about designing some kind of commemorative attraction to compliment both the visit itself and tourism thereafter.

The result? A pair of interactive replica statues of Wallenda walking a tightrope, one for the Canadian side of the falls, the other for the American side.

“The team at Ripley’s is amazing,” said Diodati. “They re-created everything: the pole he used, the clothes he wore that day. They actually had him (Wallenda) come into their Orlando studio and used a 3-D printer to get everything right.”

“What’s more, they bore all the costs.”

According to Diodati, tourists will be able to stand on a platform that gives the illusion of walking the wire with Wallenda over the falls.

“We’re hoping everyone will want to take a photo with the sculpture – it’d be great to see it go viral!”

The interactive display will remain in place until at least the end of June, but could be available for photo-ops right through to the end of the high tourism season in September.

“It all depends on how the sculpture weathers and how it’s received by the public,” said Diodati. “But I’m confident it will be there until the end of summer.”

Back in 2012, Wallenda’s famous walk across the falls attracted over 10,000 in-person spectators on the U.S. side of the gorge and an estimated crowd of 120,000 on the Canadian side, with hundreds of millions more tuning in at home.

The stunt required international cooperation and permission from a litany of commissions, authorities, and government entities from the U.S. and Canada.

As the project’s largest financial backer, ABC notoriously required Wallenda to wear a safety harness –the first time the lifelong aerialist was forced to do so. Going into the event, there was considerable speculation that the expert high wire artist would remove the tether. In the end, however, Wallenda kept his word and left the precaution in place.

He finished the feat in just 25 minutes without incident.

This Wednesday’s event at the Table Rock Centre is scheduled for 1:00pm. The public is invited to attend.