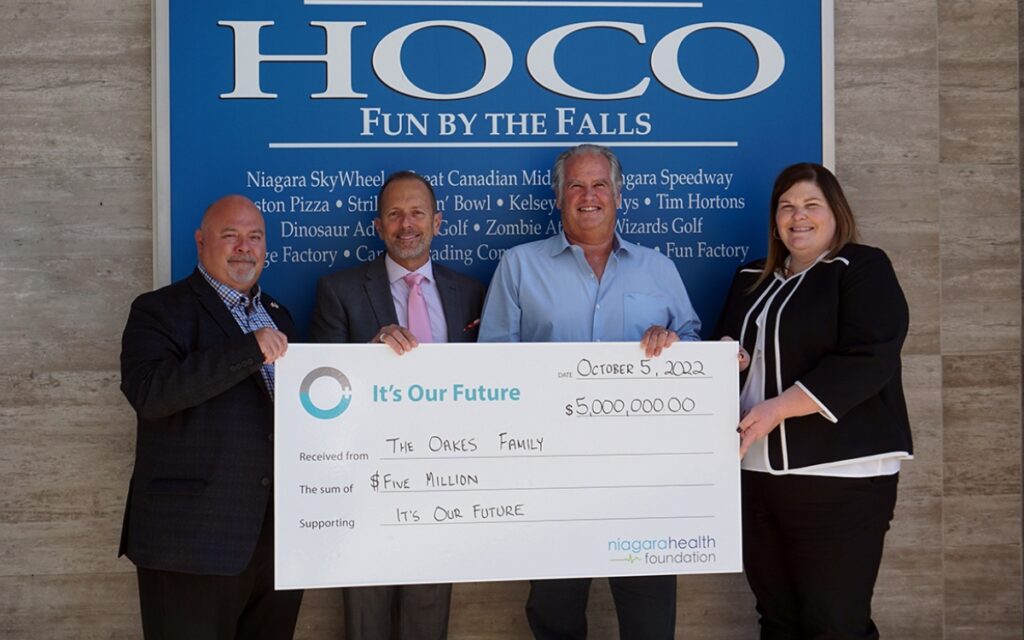 Through the generosity of local private sector donors like the Oakes family, the South Niagara hospital fundraising campaign has secured over $27 million of its $40 million community goal. Pictured right to left are board chair of the Niagara Health Foundation (NHF) Albert Iannantuono, Mayor of Niagara Falls Jim Diodati, president of HOCO Harry Oakes, and president and CEO of the NHF Andrea Scott. Photo credit: NHF

Niagara’s newest hospital project has received yet another major boost from the local private sector.

On Thursday, October 13, the Niagara Health Foundation revealed that the Oakes family of Niagara Falls has committed $5 million toward the new South Niagara hospital.

Harry Oakes, on behalf of the Oakes family, represents the project’s seventh “founding donor” to be celebrated by the foundation in recent months. Spencer Fox of E.S. Fox Ltd., Mark Basciano of Mountainview Homes, Angelo Butera of Panoramic Properties, the Rankin family, Guery Goyo of Villarboit Group of Companies, and Domenic DiLalla of Centennial Construction all previously pledged between $5 million and $2 million.

“Our gift would not be possible without the hard work and dedication of our HOCO team members. Our family is pleased to be in a position to give back by supporting the new hospital project,” said Harry Oakes, who also co-chairs the It’s Our Future fundraising campaign alongside Mayor of Niagara Falls Jim Diodati.

“The new hospital will provide our Niagara Health care team with a state-of-the-art facility they deserve in order to provide care for Niagara residents and visitors. Hopefully, this gift will inspire others to follow and make a commitment to the It’s Our Future campaign.”

The Oakes family has a long history of giving back to healthcare in Niagara Falls, with Sir Harry Oakes and Lady Eunice donating the land for the current Greater Niagara General Hospital in the 1950s.

In honour of the $5 million donation, the main entrance of the new hospital will be named after the Oakes family.

“Leading by example is something that has long been a trademark of Harry Oakes and the Oakes Family,” said Mayor Diodati.

“Evident in the Oakes name used throughout our city, the family has been a steward of the community for centuries. In fact, the land for our GNGH was donated by the Oakes family at the time of its construction. Now, with this incredible donation to the building of our new hospital, they are proving that to be leaders means to be continually engaged and constantly committed to making our city a better place.”

To date, the South Niagara hospital fundraising campaign has secured over $27 million of its $40 million community goal.

The rest of the near $200 million to be raised locally will come from municipal sources and Niagara Health itself. The Niagara Region has already committed $44.5 million to the project. The City of Niagara Falls and Town of Fort Erie are both expected to finalize their commitments in the near future, with the former projected to contribute around $30 million.