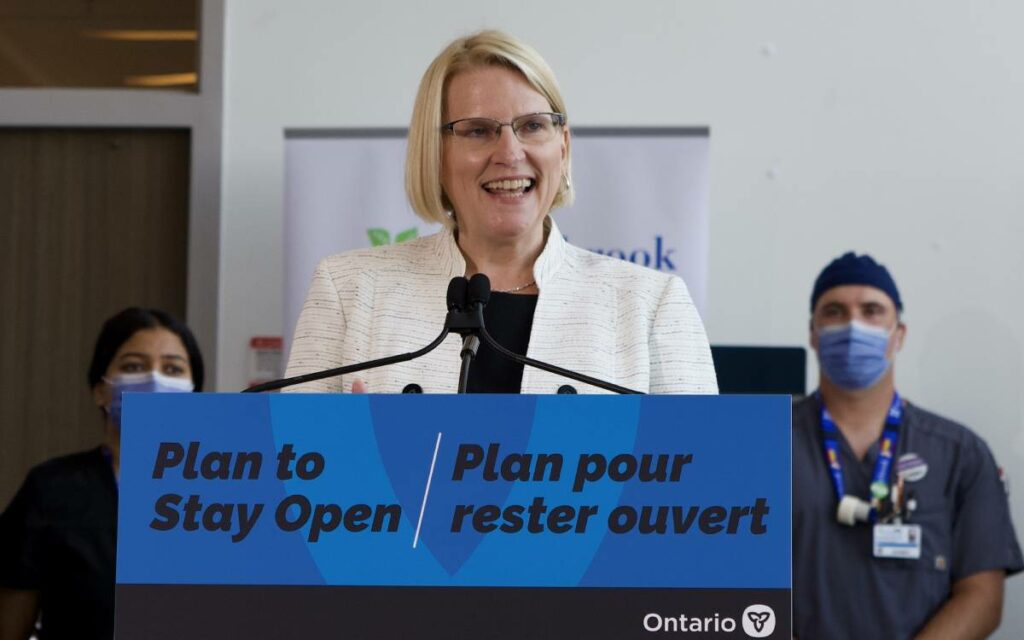 Probably the most important of the many changes announced this week by Deputy Premier and Minister of Health Sylvia Jones (pictured) is the expansion of surgeries to private facilities, while still having these procedures covered by OHIP. Photo credit: Twitter/Sylvia Jones

The Ford government announced the latest phase of its so-called “Plan to Stay Open” for the health care system this week, and anyone expecting monumental changes was bound to be disappointed. That being said, the announcement started a process which could become very promising and introduce the kind of changes the system needs to better serve Ontarians and put a halt to the negative trends currently plaguing health care in the province.

The stated goals of the changes were to add thousands of health care workers and free up hospital beds to reduce wait times, clear surgical backlogs and improve health care quality. Some of the ways the government plans to do this are by changing the ridiculous protocol whereby paramedics have to idle for hours in hospital emergency rooms with patients instead of being able to move on to the next emergency, and more proactively move elderly patients who are currently occupying hospital beds unnecessarily as they suffer dementia, into long term care (LTC) facilities. This may mean that elderly patients are moved further away than desired from loved ones temporarily, a change that will undoubtedly encounter opposition. Rooms currently set aside for Covid isolation in LTC homes will also be freed up for general use assuming the Covid threat is truly behind us.

Other proposed measures include policies to expedite the credentials of foreign-trained health care workers, including such things as paying for the exam, applications and registration for these workers.

There are also plans to encourage paramedics and other health care workers to treat patients in their homes when possible, instead of automatically bringing them into a hospital emergency room, although the details as to how this will be accomplished have not yet been laid out. There are other jurisdictions that have had considerable success with this approach of treating patients at the scene or somewhere other than an emergency room, however, so this has potential.

Probably the most important part of this announcement is expanding surgeries to private facilities, while still having these procedures covered by OHIP. This is exactly how the celebrated Shouldice Hernia Hospital has operated for decades, and it is one of the top facilities for its surgical specialty in the world. The concept of having a network of privately-run clinics doing such procedures as joint replacements, vision care and similar vital but non-life-threatening operations is a model that works well in many countries around the world within a universal system, usually at lower cost than we currently pay in Ontario as efficiency is so much greater. Considering the immense backlogs for these types of operations in Ontario and the absurdly long wait times that are causing considerable suffering and worsening of health conditions, expanding private surgical clinics should be a no-brainer.

But of course, private health care provision is the third rail of Canadian health care policy, with vested interests fighting any change even though it will be beneficial to patients and the present system is collapsing under the strain. Most Canadians likely still believe we have a largely public system, when in reality close to half of health care services such as labs, various diagnostic clinics, walk-in clinics and doctor’s practices themselves are all privately provided. Permitting more private surgical facilities under OHIP payment will serve to reduce wait times and provide much-needed competition to the inefficient, bureaucracy-laden, sluggish unionized government service providers.

It is not surprising that the biggest opponents to these changes are the public sector unions involved, as they know that once the private sector clinic genie is out of the bottle they will have to shape up or be replaced. Anyone who has ever gone to a private clinic, with their superior customer service quality, shorter wait times and improved efficiency, will never want to go back to the bad old days of long waits and poor service offered by the unionized government monopoly.

There is no reason these changes could not have been made years ago, but the political pressure to maintain the broken status quo was such that governments of all political stripes resisted meaningful change. Now that the system is truly in crisis – and the crisis is happening right across Canada to varying degrees – the choice is between the perpetuation of a model based on failed ideology or saving Canadian lives. It should be an easy decision.