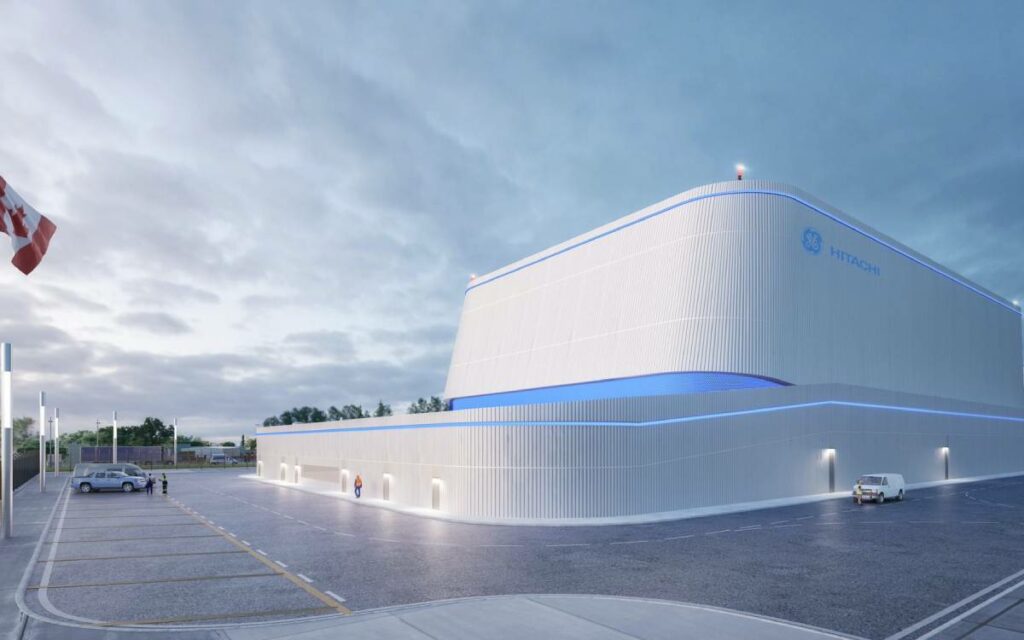 Artist rendering of the planned Darlington small modular nuclear reactor. Construction on the project could begin later this year and be completed by as early as 2028. Photo credit: GE Hitachi Nuclear Energy

If you’re an Ontario resident, there is a two in three chance that the electricity used to charge the phone or power the computer you’re currently reading this article on was generated by nuclear energy.

Nuclear supplies 61 per cent of the province’s electrical power, the largest energy contributor by far. The nearest competitor is hydro, which supplies 24.5 per cent. Wind provides a paltry 7.4 per cent, while solar provides a mere quarter of a single percentage point of Ontario’s electricity.

Without nuclear energy – which supplies power 24 hours a day, 7 days a week, 365 days a year (and is, by the way, clean, low-cost, and reliable) – Ontario simply could not function.

What’s more, as transportation and other sectors electrify and the world continues to decarbonize, demand will only increase in the coming decades.

Thus, investing in building out the province’s nuclear capacity is a smart move, and something that the Ford government has committed itself to.

In an announcement that flew under the radar last month, it was revealed that Ontario Power Generation (OPG) struck a deal with GE Hitachi Nuclear Energy to deploy a small modular reactor (SMR) at the Darlington Nuclear Generating Station in Durham Region, the only site in Canada currently licensed for a new nuclear build.

“We are so pleased to be working with OPG to bring SMR technology to life at Darlington,” said president and CEO of GE Hitachi Jay Wileman. “This is a significant and concrete action in the fight against climate change that will also create jobs across Ontario and Canada as we leverage the robust and growing nuclear supply chain.”

OPG and GE Hitachi will collaborate on every aspect of the project, mutually contributing to the engineering, design, planning, preparation of the licencing and permitting materials, and performing site preparedness activities.

It’s anticipated that 70 to 80 per cent or more of the necessary components and materials for OPG’s SMR will be sourced in Ontario.

“Ontario is leading the way in new nuclear technologies – like SMRs – that represent tremendous economic and environmental opportunities for our province and all of Canada,” said Ontario’s Minister of Energy Todd Smith. “SMRs can provide reliable and emission-free energy while creating jobs, economic growth and export opportunities. Our opportunity to be a leader in this technology and showcase Ontario’s nuclear expertise to the world is right now.”

According to a 2020 study from the Conference Board of Canada, a single SMR would result in: 700 jobs during project development, 1,600 jobs during manufacturing and construction, 200 jobs during operations, and 160 jobs during decommissioning.

With 60 years of operation, the estimated positive impact on Gross Domestic Product (GDP) could reach more than $2.5 billion and result in an increase of provincial revenues of more than $870 million.

And it’s environmentally-friendly, to boot.

A small modular reactor of about 300 megawatts in size can prevent between 0.3 megatonnes (MT) to 2 MT of carbon dioxide emissions per year, depending on where it is located and what kind of power it is displacing.

“We know nuclear is a key proven zero emissions baseload energy source that will help us achieve net zero as a company by 2040, and act as a catalyst for efficient economy-wide decarbonization by 2050,” said OPG president and CEO Ken Hartwick. “By moving forward, with our industry-leading technology partner GE Hitachi, on deployment of innovative technology for an SMR at Darlington, OPG is paving the way on the development and deployment of the next generation of nuclear power in Canada and beyond.”

Site preparation, including installation of the necessary construction services, will begin in the spring of 2022, pending appropriate approvals.

The Darlington reactor will be Canada’s first commercial, grid-scale SMR and could be completed as early as 2028.