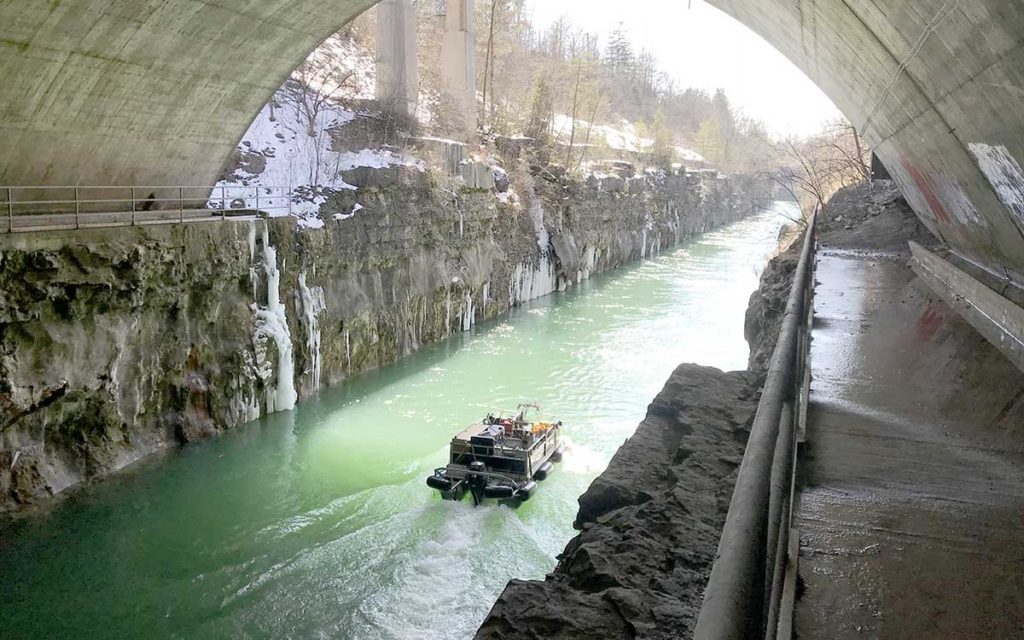 After nearly a century of reliable operation, Niagara’s Sir Adam Beck Power Canal is gradually showing signs of age. Ontario Power Generation (OPG) is in the planning stages of addressing that issue as it prepares to undertake the biggest project on the canal since 1964/1965 – the one and only time the canal was completely drained and repaired under the watch of what was then known as the Hydro Electric Power Commission of Ontario.

In 1981, some additional work was done to remove accumulated debris without dewatering the canal. That work was carried out using what is called ‘wet’ dredging.  Since then, technology has moved at a rapid pace and has allowed OPG, and its partner companies on this project, to use many innovative technologies to perform condition assessments so they can better understand the potential size and extent of the work. Some of the technology applied was designed specifically for the canal project.

One of the most important pieces of new technology implemented was an autonomous ‘self-driving’ pontoon vessel equipped with high-end cameras, Lidar, and five sonar heads that allow the team to build a 3-D model that captures both above and below water conditions of the canal. This technique allows the engineers to identify what needs to be addressed by collecting millions of points of data over great distances in a short period of time.

“This is the first time in history that we will have a full picture of the canal in its entirety, and the condition it’s in,” said Mark Armstrong, a project manager with OPG.

The unstaffed vessel is a much safer option then sending in divers or putting people aboard, something OPG ruled out from the start. “Safety comes first and that is the main reason we used technology rather than humans to survey the condition of the canal,” said Armstrong. “In addition, the canal, at 13.7km, is just too long and it would be a painstaking process for a dive team to cover.”

Planning for the canal remediation project really began around 10 years ago when OPG started having conversations with the Region about relocating the intake pipe for the water treatment plant. That project was deferred at the time as the urgency wasn’t there, but those discussions were revived a couple of years ago as the massive canal project gets closer to reality.

Currently, the project is in the planning stages. OPG needs to first determine the condition of the canal in order to develop a remediation strategy. The consultants will advise the remediation options available.  One of those may be to drain the entire canal. “There may very well be areas we just can’t fix effectively in the wet,” said Tony Palma who is leading the canal project for OPG.

“The actual remediation of the canal is expected to begin in 2021. In the meantime, there is lots to do. The extent of repairs need to be determined, permitting and notifications need to be in place, and public information sessions will need to be conducted long before the project commences,” Palma added.

As OPG works towards the actual remediation of the canal they have undertaken a thorough stakeholder relations program. “Prior to the survey of the canal in March, we hand delivered over 300 letters to homes backing onto the power canal and spoke to some of the residents,” said Steve Repergel, OPG’s Corporate Relations Officer. Repergel said they also have ongoing dialogue with many other stakeholders including the NPCA, City of Niagara Falls, Niagara Parks and the Ministry of Environment. “They’ve all been very supportive. We meet together to provide updates and exchange information on a regular basis,” he explained.

Once complete, the remediated power canal will help continue to produce low cost, clean, renewable energy for many more decades to come.

OPG’s Niagara Operations include three hydroelectric generating stations on the Niagara River and two smaller plants in St. Catharines. Their combined annual production is in the range of 12 billion kilowatt-hours — enough power to supply more than one million homes year-round.