Opioid crisis “out of control” in Niagara 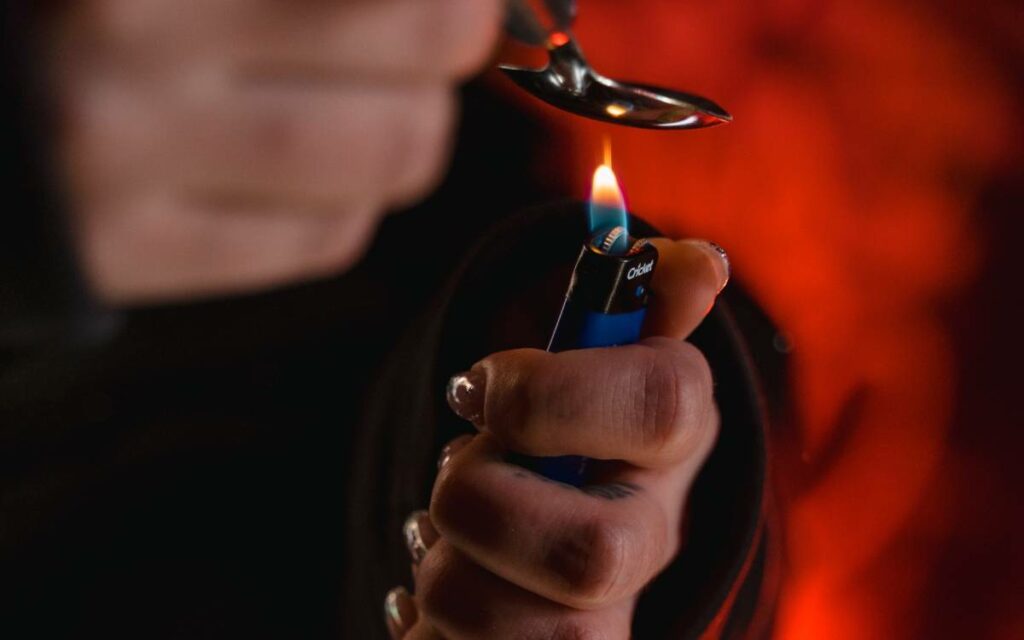 As executive director of Positive Living Niagara, Walker is responsible for staff and volunteers who provide support, education, and advocacy for individuals affected by a number of blood-borne infections such as HIV and Hepatitis C. The organization’s deep involvement with AIDS-related drug users has spilled over to opioid addiction and overdose, which is currently at a critical juncture in Niagara.

In an April 7 CHCH-TV news report, Walker acknowledged the scope of the problem.

“It really is out of control,” he said of the opioid crisis. “We continue to see escalating numbers of overdoses and have had a 45 per cent increase in the number of naloxone kits (a medication used to block the effect of opioids) that were reportedly used during February and March. There’s a surge of extremely tainted heroin coming into the region…we’re really in a terrible state of affairs. According to the coroner’s data, during last year, we had the second highest death rate in the province from opioid overdoses…only Toronto exceeded us.”

St. Catharines has the largest population in Niagara, and the most overdose deaths, but there really is no set pattern, said Walker. “It’s really a regional problem.” Some drug users, according to Walker, think they’re injecting straight heroin, when in fact, it’s been mixed with fentanyl, which is much more powerful.

There were 533 opioid-related emergency department visits in Niagara hospitals from January to September of 2020, which resulted in 69 opioid-related hospitalizations, and 123 opioid-related deaths. Fentanyl was present in the blood of 52 per cent of the deceased overdose victims, followed closely by another opioid, carfentanyl.

“People have no idea what they’re getting…there’s no quality control,” said Walker.

Walker said that Niagara Positive Living distributed 634 free naloxone kits in March of this year, and 152 were used in emergency overdose situations. “It’s important to have naloxone readily accessible to drug users, because by the time someone calls 911 and EMS arrives, it could be too late to save them,” he said. 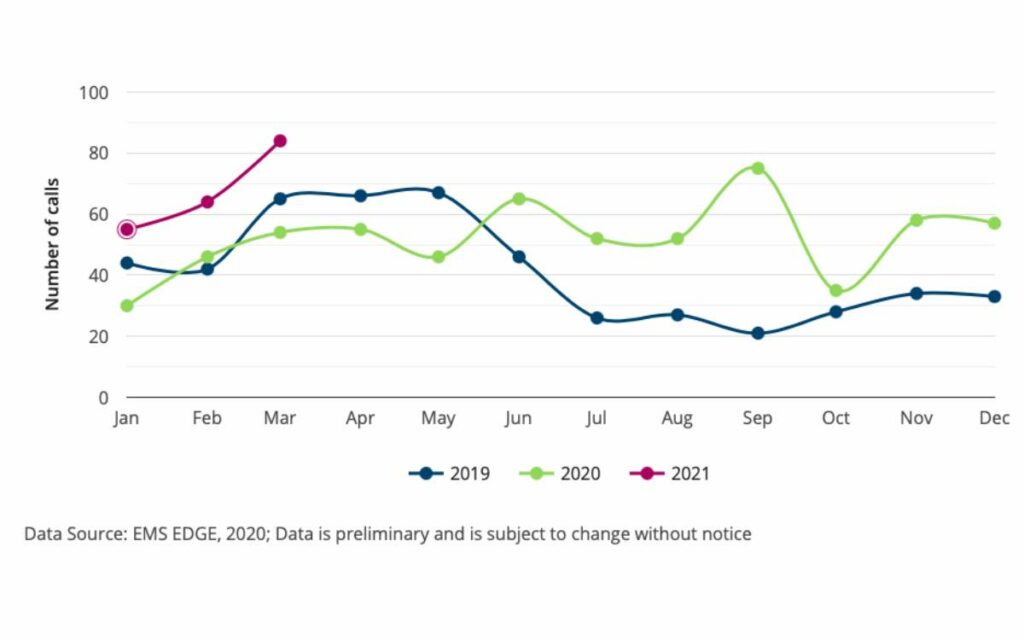 Number of opioid-overdose calls responded to by Niagara EMS between 2019-2021. Credit: Niagara Region.

According to Walker, only about 20 per cent of the drug users supported by his organization actually call 911, due to a fear of police and potential incarceration. “Criminalization of drug use is really feeding the crisis,” said Walker. “And of course, with COVID, the message to isolate yourself is really counter to drug overdose safety. The number of deaths that have occurred as a result of lone users has increased dramatically during COVID.”

More “boots on the ground” are needed to provide additional community outreach with the under-housed and homeless, said Walker. “There’s so much more we could be doing, but simply don’t have the staff,” he said. Niagara Positive Living has two vans that go out each night to deliver supplies and has two outreach workers on the street. The organization operates a safe injection site and treatment service, which sees upwards of 150 people per month.

In Walker’s eyes, decriminalization is a critical component of the way forward. He said users won’t go to the police due to worries about being encumbered with a criminal record, which would make it difficult to find employment, and thus destine them to a life of poverty. “This terrible cycle happens because we criminalize substance use instead of treating it like an addiction,” he said. “The drug use has come from either trauma or physical injury. We’ve got to get past this whole idea that people are using because they’re criminals, that they’re terrible people.”

Another key to reducing the spate of overdoses is to regulate the supply of drugs, so as to stop people from buying tainted, poisonous substances. “By connecting with a doctor, they’d be getting a prescription and the proper dosage, and a better chance to enter a treatment program,” said Walker.

“The local United Way pays for our naloxone training and mobile outreach van drivers, and we receive the occasional Trillium grant,” said Walker. “Even the St. Catharines Downtown Association has provided us with some money to pay peer workers to go out into the community. We do receive some provincial funding, but nothing from federal coffers at this point in time.”

Marty Mako, the commander of Mobile Integrated Health for Niagara EMS, shares Walker’s concern, and sees first-hand the ravages of drug use on Niagara’s streets. He said that Niagara EMS responded to suspected opioid overdoses 84 times in March 2021, representing a 31 per cent increase from February. It’s a grim record for a single month.

“The key messaging in the pandemic is ‘stay at home,’ but that brings huge risks for a solitary drug user,” said Mako. “Among the drug-user population, we are telling them to make sure someone knows where they are, to inject with others present, and to have a cellphone nearby in case of an emergency.”

The presence of fentanyl is particularly concerning to Mako, who said that with less of the substance coming from the US due to the border closure, drug dealers are resorting to making their own, which makes the supply more unpredictable and deadly.

“Another issue we’re trying to address is the stigma associated with drug use and mental health, to make people feel that there is nothing wrong with reaching out when they need help,” said Mako. He noted that EMS interventions have been implemented, including the formation of a street outreach team, with paramedics trying to build relationships with at-risk communities.

“We’re not just waiting for the 911 call to happen, [we] are proactively visiting encampments where people are living, in an effort build trust,” said Mako. 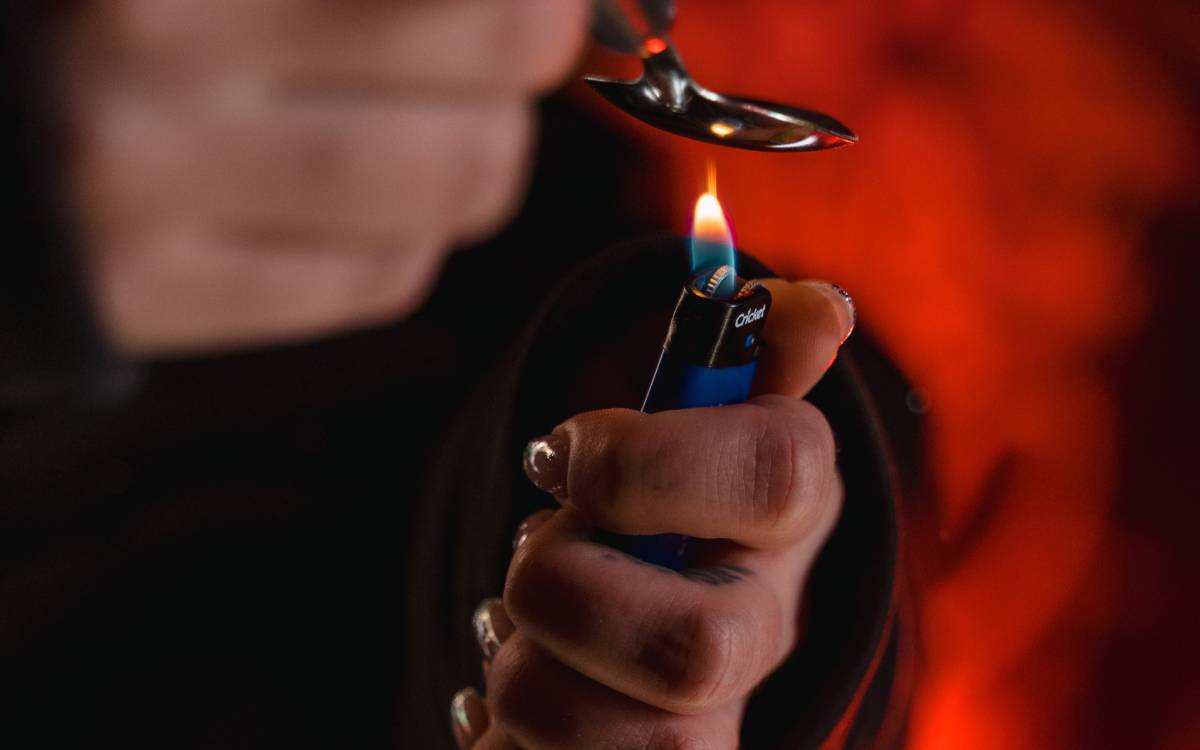