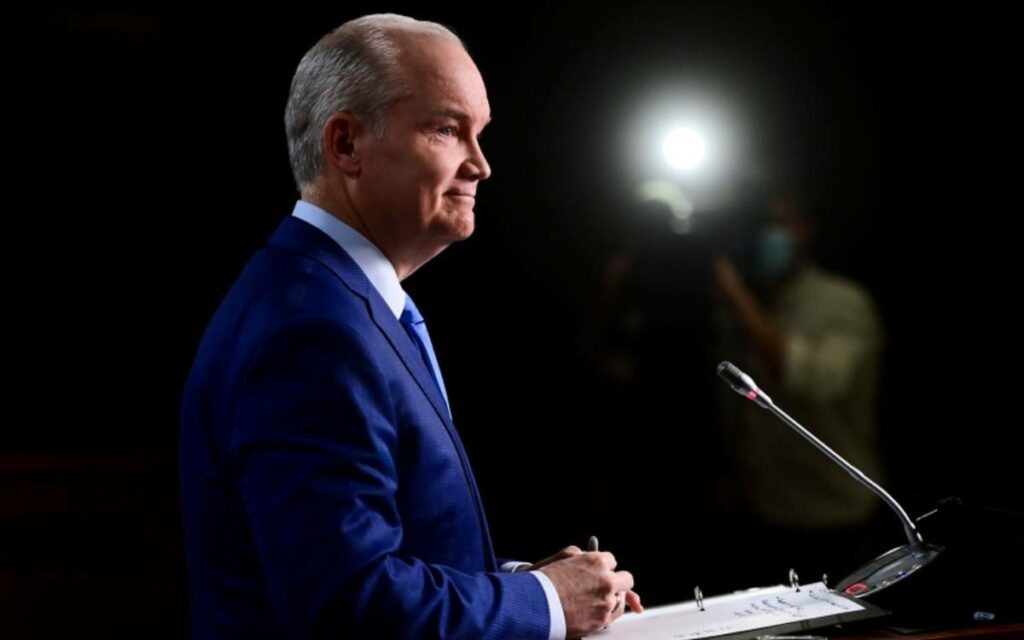 O’Toole’s speech addressed the necessity for the Conservative Party to switch strategies – winning opposition is not winning government, and after two defeated elections, it is time for change.

His speech also addressed a “Canadian Recovery Plan” which set out five main priorities the Conservatives will focus on:

O’Toole pledged that Conservatives will enact a comprehensive jobs plan to recover the million jobs lost during the pandemic within one year. He also promised to take immediate action in the hardest-hit sectors, noting a commitment to helping those who suffered the most – women and young people. He added that Conservatives will continue to assist small businesses and provide incentives to invest, rebuild, and start new businesses.

Repeatedly mentioning Justin Trudeau’s numerous ethical scandals, Erin O’Toole vowed to “clean up the mess in Ottawa with an anti-corruption law.” A promise to toughen the Conflict of Interest and Lobbying Act, as well as imposing higher penalties was made in his speech.

O’Toole acknowledged how the pandemic has exacerbated the mental health crisis in Canada. He even mentioned how mental health challenges had impacted his own family during the pandemic. In his speech, he said Conservatives will introduce a Canada Mental Health Action Plan and boost funding partnerships with the provinces for mental health care. He also added that they will provide incentives to employers to provide better mental wellness coverage to employees. Finishing off that policy point with a commitment to implement a three-digit suicide prevention hotline.

Next, O’Toole raised how unprepared Canada was for this crisis. He pledged to make Canada more resilient, reduce reliance on foreign countries like China, and protect the health of Canadians. He suggested partnering with pharmaceutical companies to increase the production of critical medicines and active ingredients in Canada and build domestic vaccine production capacity.

As expected, the final pillar of the plan revolves around the economy. A commitment to balance the budget over the next decade was made in the speech.  O’Toole also noted that once the recovery starts, the Conservatives will get spending under control by implementing targeted stimulus, growing the economy to secure revenue needed to pay for government services.

O’Toole’s speech pitched a commitment to Quebec nationalism, promising to strengthen French language laws. It was also delivered bilingually – an impressive upgrade for the leader who started his nomination race with significantly lower knowledge of the language. Was this enough to make a plea for unity? Did he do what he had to do to quell party dissent?

Although criticized for not narrowing down on the specifics of a climate plan, O’Toole promised a “comprehensive” and “serious” plan to address climate change. He also made the point that the climate change debate was over – despite what some CPC members may otherwise believe. A good start but far from being translated into tangible policy.

“There is no other party in Canada more committed to national unity than the Conservatives,” O’Toole said.

While the new Conservative Party leader made numerous promises, it will be interesting to follow the party’s direction. Erin O’Toole has to be careful with finding the balance between “widening the big blue tent” and simply pitching the tent in a new area. Will the CPC be successful in attracting its new target voters? Or will they end up alienating their base?