Ottawa has become a theatre of the absurd 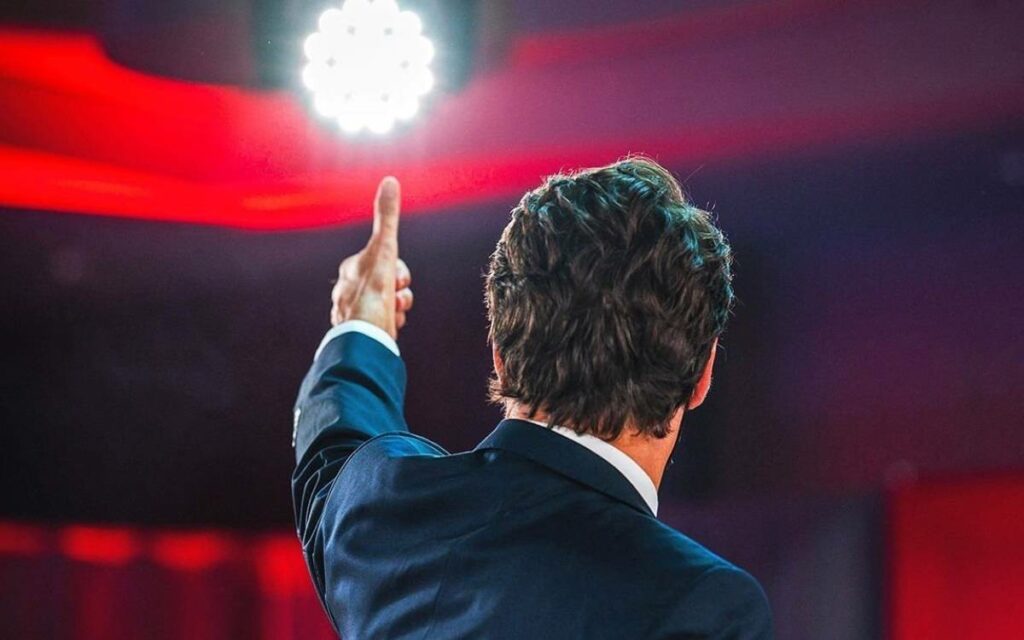 There is really no other way to describe Ottawa these days but as a theatre of the absurd. At centre-stage we have our dramatic PM Justin Trudeau continuously performing – all hair and socks, and virtue signaling and apologies. This farcical character has Canadians (and the subsidized mainstream media) spell-bound, mouths agape, while all the serious action for the country takes place off stage, behind the curtain.

There is so much happening, so quickly, on so many levels that Canadians have lost track of what counts – or they simply have lost interest; imagine some dulled to the point of contentment with the amusement of Jagmeet Singh’s TikTok gyrations?!

It has become that weird in the Nation’s Capital.

Let me introduce three scenes from this past week to illustrate how Canadians have been numbed into a prolonged willing suspension of disbelief when it comes to Trudeau and his troupe.

Scene One. PM Trudeau graced a media conference to pronounce the future dates for revealing his cabinet and for opening parliament. On October 26, the PM will parade out his selected cast of cabinet characters to take the stage and play out the government’s next Act.

On November 22, the PM has decided to swing open the doors of parliament and let MPs back to work – media like to point out that it will be two full months since the election and more than six months since the lights were on in the House of Commons.

Yet, it will be much longer before MPs will get down to work. The first week back is filled with the drama, pomp and ceremony to elect the Speaker and to read the Throne Speech. In early December, the MPs’ committees (where the real work occurs) are likely to select their chairs and then go in camera so they can sort out future work agendas. Then MPs will be sent off for their Christmas recess – and they’re not scheduled to return to Ottawa until January 31, 2022.

So, it will actually be nearly eight months before MPs are “back at it.”

“What’s the big deal?,” we’re inclined to ask. Canadians are managing fine through a fourth wave of COVID and the uncertainties of store shortages, rising gas prices, inflation and, of course, the announcement of extended government support programs.

The truth is Canadians are now accustomed to seeing their MPs MIA. We were quite satisfied with the PM’s Rideau Cottage soliloquies while parliament was shuttered. It did not matter that MPs sat for a mere 40 days from Trudeau’s election of 2019, through the first and second waves of the pandemic in 2020…

The synopsis of this sidestory is there’s an increasing disregard for parliament, our country’s house of democracy. Parliament’s role is to have elected representatives debate the limits of government’s spending and taxation. It’s at the core of the Westminster model of responsible government dating back hundreds of years. Yet, this tradition and democracy itself has been punted aside by Trudeau and his backroom – without even a sigh or whimper from Canadians.

Scene Two. Our federal health minister appears from behind the curtain to clear her throat and casually say, “I’ll remind Canadians that, as annoying as it is … we still have travel advisories in place recommending that people don’t travel unless it’s absolutely necessary.”

Baa-zing! This warning just after Canadians were entertained by thousands of dancing candidates in an election extravaganza. And daily, we are treated to the PM and his cabinet cronies making announcements from different stages set against backdrops across our beautiful country. Now Patty Hajdu tells us to think twice before making any holiday travel plans. (This is the same actor who told Canadians in early 2020 not to travel beyond their front doors while she herself was jetting back and forth weekly from Ottawa to her home in Thunder Bay.)

We are told to stay at home. The government is working on a vaccine passport that will allow us to go to a local restaurant or movie theatre. It should be ready by the Christmas holidays.

The hypocrisy has not been lost on Canadians (even though we remain in the fetal position wishing away COVID). It appears the audience is not amused. The best catcall for Patty and her flubbed lines went viral on Twitter: “Do as I say, not as Hajdu.”

But, in all seriousness, the TruAnons have already surfed passed the PM’s Tofino episode. And in coming weeks Trudeau is about to jump the shark with scenes of group hugs at the Glasgow shmoozefest summit, pulled together for global jetsetters to save the planet.

We are to accept that there’re no double standards here – just you, you dutiful Canadian, don’t travel! (Can’t you hear Patty mumbling under her breath, “Stay on your couch and don’t mind us romping across the world’s stage.”?)

Scene Three. The re-elected Liberal MPs met to send off their friends who did not get enough votes to keep their bit parts in Ottawa. And it is reported to us by certain subsidized media sources that behind the closed caucus doors PM Trudeau gave a rousing speech to his Liberal tribe, reassuring them that no defeated candidate would be left forgotten.

This scribe thought it was amusing that in the business news of that particular day, Frank Baylis came to sell his company for $1.75 billion (U.S.).

Recall that Frank Baylis is a former Liberal MP from Montreal who last summer was given a lucrative $237 million contract to make 10,000 pandemic ventilators even though Health Canada had not approved them. The same Mr. Baylis was given a $422,946 “research contract” for undisclosed research. It is a niggly point-of-fact that, to this date, the company has yet to produce the ventilators and it is unknown what research has been completed.

So, on the basis of a wonderful spreadsheet that shows $200 million (U.S.) revenues expected in 2022, and an apparent fast track with federal government procurement, an American firm stepped forward and penned the deal to buy Baylis Medical.

To be fair, it’s an amazing success story for this family business, led by a man that has become one of Canada’s wealthiest businessmen due to his deal-making acumen. Having said that, Baylis’s recent payday is still quite the sweet deal for a Liberal tribesman. Millions of dollars of taxpayers’ money. Zero accountability for goods and services delivered. And a billion-dollar-plus retirement handshake. This, all in 14 months.

It was Warren Kinsella (long-time Liberal party strategist and former PMO staffer to PM Jean Chretien – and Sun Media columnist) who first described the Trudeau government as a kleptocracy. He pulled no punches in his pointed editorial about “Trudeau’s cabal.”

Kinsella wrote: “It never stops, this fetid, foul stew of corruption and moral blindness. Even during a pandemic, the Trudeau government’s descent into the muck continues unabated. So, there’s a name for what we’ve now got. There’s a name for a government like Justin Trudeau’s – a government run by those who seek status and personal gain at the expense of the rest of us. It’s a kleptocracy.”

By extension, we can conclude that these scenes from last week are not characteristic of a parliamentarian democracy, but rather something one might expect in a third-world dictatorship. Through a masterful centre-stage performance, Trudeau and his friends are enjoying free rein to do as they wish. There is no parliamentary oversight into the finances of the country, or anything else for that matter.

And weary from the constant strain of the pandemic, Canadians are politely applauding as the play unfolds. It matters not that a cadre of unaccountable, behind-the-curtain, political operatives are pulling the levers, absurdly like a scene out of the Wizard of Oz.

“Toto, I have a feeling we’re not in Ottawa anymore.”