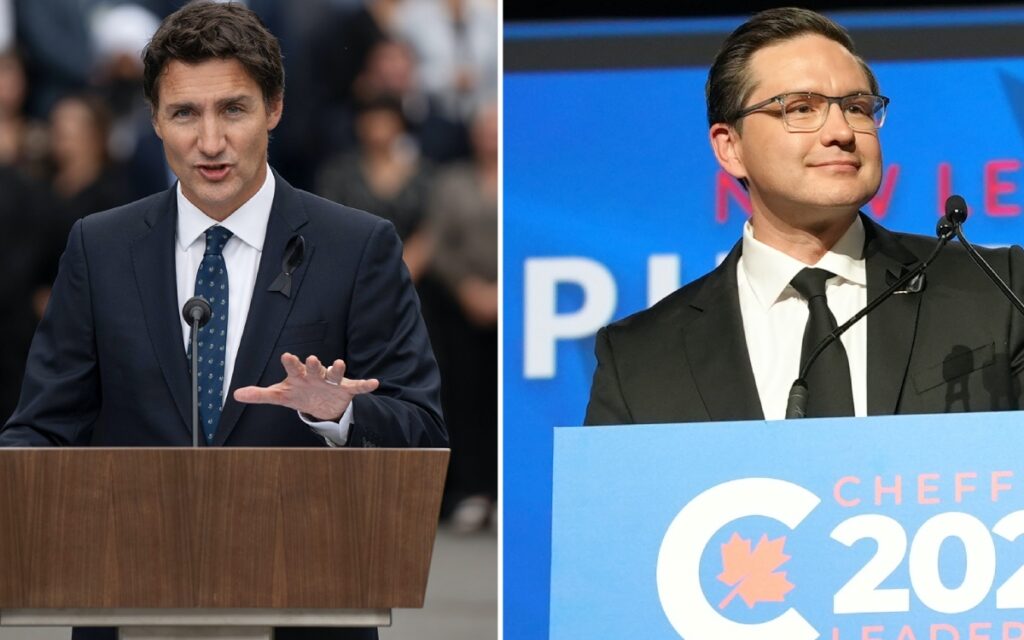 Political pundits and much of the national press corps will often resort to jockular descriptions of politicians’ debates and activities. Whether it is covering the pugilists’ blow by blow in the House of Commons or announcing who is nosing ahead in the latest opinion polls, the news from Ottawa is regularly presented as a contest. The punchy headlines and bellicose commentary grab and keep Canadians’ attention.

And now with the newly selected Conservative Leader in the ring, Ottawa’s “sport” has become a lot more entertaining.

September 22 was the first time combatants Prime Minister Justin Trudeau and Opposition Leader Pierre Poilievre met two swords length apart in the House of Commons. Media reports of the encounter did not disappoint those anxious to get their first glimpse of the titans coming together: “Trudeau, Poilievre face off”, “Pierre Poilievre leans in as Justin Trudeau pushes back”, “Poilievre has first joust with Trudeau”.

Here’s the ringside call of that first fisticuffs:

The feistiness of this exchange was brash enough to have the Toronto Star lead editorial the next day plead, “Civility in politics, please.” Star editors wrote: “The issues confronting the nation should be vigorously debated in the House of Commons. Surely those debates can be civil too.”

The Hill Times has published a number of articles in the past weeks recording MPs’ impressions of what to expect in the House of Commons through the fall. It appears everybody is ready to rumble. A senior Liberal pundit admitted, “It’s going to be a fist fight. I mean, the Conservatives under Pierre Poilievre are going to be in a fist fight. They are going to punch Justin Trudeau and the Liberals in the head every day, every hour, every minute, every second, every week, and they’re going to use their different platforms to do it.”

A Liberal MP candidly stated, “We’re not going to just, you know, lay down and get punched. There’s a serious belief [in the] caucus that this guy is a serious contender, probably the biggest challenge that we faced in the last several years, and he’s very skillful. So I think there’s no question that they [the PMO] take him as a serious threat.”

In all those interviewed by the Hill Times it was the NDP House Leader, MP Peter Julian, who offered a moment of sensible reflection when he observed, “I think one of the things that I’ve seen over my many years in Parliament is the Liberals and Conservatives love culture wars. And they love to paint each other as diabolical and outrageous, and I think people are really tired. People are frustrated. There is a level of anger up there. But I think what people want is someone to actually deliver.”

To switch venues, let’s consider the race program and recent results from the downs of Parliament Hill. It appears the earlier news of the Conservatives inching ahead of the Liberals is confirmed this week with three opinion polls indicating the Conservatives have opened up a considerable lead.

Earlier in September, Leger suggested newly crowned Poilievre and the Conservatives had surged from a five-point deficit in an August poll to take a 34 to 28 per cent lead over the Trudeau Liberals, Mainstreet’s poll reported the Conservative lead was greater, 40 to 32 per cent. Abacus Data released their numbers, showing a five-length lead for the Conservative horse, er Party, 35 to 30 per cent.

This week Ipsos released a poll exclusively conducted for Global News. Ipsos’s take is that the Conservatives are leading 35 to 30 per cent. But the more troubling news for the Liberals is the commentary that Opposition Leader Poilievre is the “best candidate for prime minister” (by a margin of 35 to 31 per cent). Furthermore, two out of three Canadians now believe it is time to change horses.

Angus Reid also shared their latest polling results and they have the Conservatives opening up a seven-length lead over the Liberals, 37 to 30 per cent. The Conservatives have a spring in their step as the polling results from voter-rich Ontario show their fortunes are rising to nearly 40 per cent support. Angus Reid’s summary on this surge is that Poilievre has harnessed the support of the People’s Party voters.

This same opinion poll has 49 per cent of Canadian respondents believing that the best descriptive for Justin Trudeau is “arrogant.” Another 45 per cent said Trudeau was “dishonest,” and 39 per cent said he was “corrupt.” A 56 per cent majority of those polled said they disapproved of the PM’s overall performance.

Many pundits are weighing in on these results and there is a general consensus that it is too early in the race to say who will cross the wire as the winner. The prevailing wisdom is the Tories need to run up the middle of the Liberals and NDP, while Trudeau needs to jockey his fortunes and convince enough voters that the Liberals are the only hope to defeat the Conservatives.

The track for the next two years appears to be hard and fast. Both Trudeau and Poilievre have solid support bases who have very different beliefs on how to approach the challenges facing Canada today: inflation and government spending, post-pandemic economic recovery, natural resources development, regional politics, international diplomacy… it is going to be a flat-out race to the finish.

So, in the Nation’s Capital the marvel of this spirited contest has captivated us all. It’s like cheering through a glitzy wrestling match where we are fully aware the scissor-kicks and sleeper holds are choreographed. But it’s the excitement of the sport and it was perhaps best captured by a Liberal MP, who confessed in a Hill Times back-to-parliament interview, “You just get your popcorn, make sure your popcorn is ready, you’re sitting in front of your tv, and it’s going to be entertaining.”