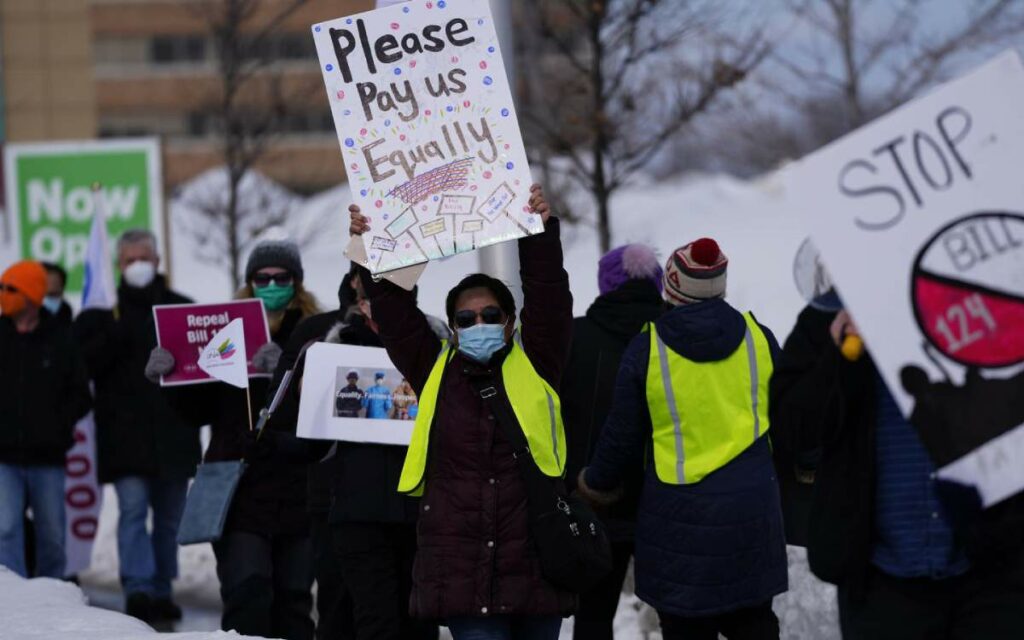 Much to the delight of union brass and membership, Ontario’s superior court recently struck down the legislation that temporarily capped public sector wage increases. While the aggrieved are pleased, if the decision stands, it will not only let public sector unions ask for wage increases they might have received in the absence of Bill 124, it will also remove one of the last tools the government has to control burgeoning public sector wage costs and fight for financial sensibility on behalf of taxpayers. Photo credit: The Canadian Press/Justin Tang

Taxpayers want governments to be accountable for how they spend their money. Unfortunately, governments are slowly losing the tools to do so.

The most recent loss occurred when the Ontario Superior Court of Justice struck down the Ontario Government’s controversial Bill 124.

Faced with growing financial pressures and election promises to fix the financial mess left by the previous administration, Premier Doug Ford had introduced the law in 2019 to temporarily cap public sector wage increases at 1 per cent a year over a three-year period.

The decision by Justice Markus Koehnen was judicial activism at its best. Arguing that Charter rights should be interpreted “generously and purposely” he then proceeded to do so by rejecting the government’s case that the bill was needed to impose financial restraint.

The Justice noted that the government had provided various tax cuts for the broader public, like the reduction in license plate sticker fees as proof that the financial situation was not bad enough to justify the legislation’s restraint on wages.

There are two problems with this argument. First, Bill 124 was introduced in 2019, before the COVID-19 pandemic hit. At that time, the government was trying to reduce the government’s burgeoning debt and deficit, as it had promised voters it would do. The tax cuts the Justice referred to, occurred several years later as the government was justifiably trying to kick start the economy and give taxpayers some financial relief after two years of COVID shutdowns and the subsequent economic damage. In effect, the Justice was second guessing the government’s call in 2019 using facts that occurred three years later.

Secondly, judging the health of the province’s finances and decisions on how to respond, is the job of duly elected governments who are accountable to taxpayers and voters, not unelected justices.

The government has stated that it will seek leave to appeal, and it should. If the decision stands, it will not only let public sector unions ask for wage increases they might have received in the absence of Bill 124 – currently estimated as high as $8 billion dollar over the next five years – it will also remove one of the last remaining tools governments have at their disposal to control burgeoning public sector wage costs on behalf of taxpayers.

The NDP Government of Premier Bob Rae enforced controversial “Rae Days” (unpaid leave) to control costs in the face of a recession. The Progressive Conservative Government of Premier Mike Harris, faced with similar financial pressures, passed a law to force arbitrators to justify wage increases by meeting several criteria, including the employer’s ability to pay. That didn’t work either.

The Liberal Government of Premier Dalton McGuinty imposed a deal on teachers, to cut paid professional development days to save money. The courts struck that legislation down as well.

People deserve a fair wage. And collective bargaining, when it works, can deliver that.

But the public purse is not a bottomless money pit. And most public sector workers enjoy compensation and benefits that far outstrip those available to their private sector colleagues.

Compensation costs can account for roughly two-thirds of a government’s spending. And sometimes it is necessary for a government to hold the line on expenditures.

In the private sector, when an impasse is reached at the bargaining table, workers can strike.  But they know that if they push too hard, the business goes broke and they lose their jobs.

There is no such balancing factor in the public sector where a monopoly exists. If a government tries to hold the line on wages and a strike occurs, the public has little patience for the resulting disruptions in schools or hospitals or transit systems.

It is the union’s job to push for more benefits for their members. Just as it is the government’s job to push back in the interests of all taxpayers.

Unfortunately, that is getting harder and harder to do.