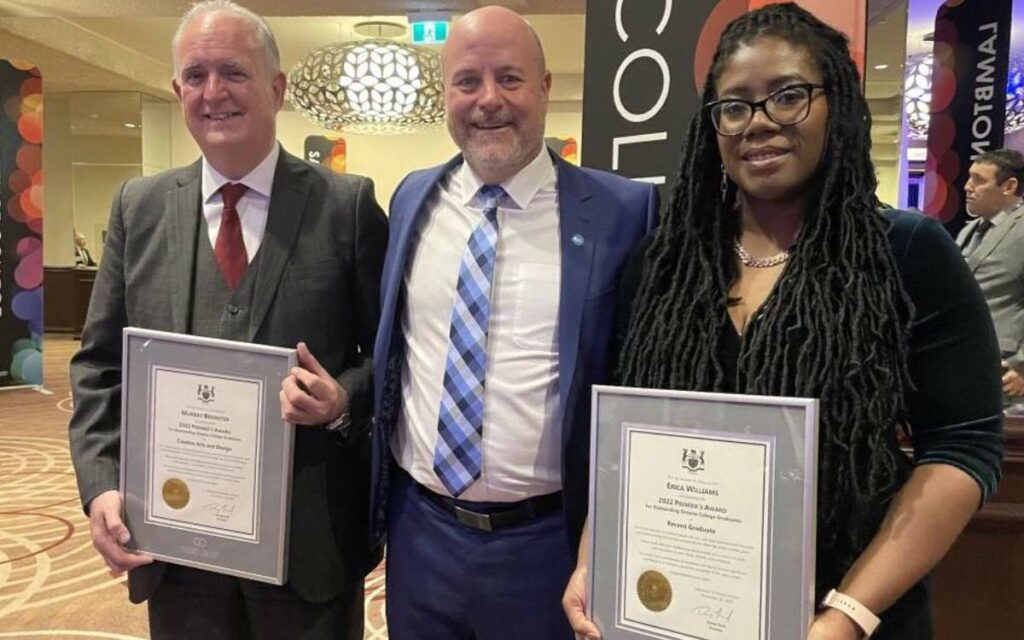 It was the first time in school history two alumni were presented with the accolade in the same year. Pictured are award winners Murray Brewster and Erica Williams. The pair stand alongside school president Sean Kennedy (centre) at the Colleges Ontario Higher Education Summit awards gala in Toronto, Nov. 28, 2022. Photo credit: Niagara College

At a ceremony Monday night, the Ontario government announced the winners of the 2022 Minister’s Lifetime Achievement Award and the Premier’s Award for college graduates.

The annual awards honour college leaders and graduates who have made enduring contributions to the province’s postsecondary system and helped build a stronger Ontario through community work, health services, business, the arts, and more.

The awards were presented at the Colleges Ontario Higher Education Summit in Toronto.

“Ontario colleges are critical in providing students with the career-focused education they need and in addressing the labour requirements of key sectors driving the province’s economy,” Premier Doug Ford said in a press release following the summit.

“The winners of the Premier’s Awards are perfect examples of the potential our college students hold and why I have such confidence in our future. They are making a lasting impact and we are so proud of what these incredible Ontarians are accomplishing.”

Niagara College alumni accounted for no fewer than two of this year’s seven Premier’s Award winners.

It was the first time that two Niagara College alumni won during the same year.

“We are very excited that two of our amazing NC alumni have won Premier’s Awards this year, for the first time in our college history,” said Niagara College president Sean Kennedy. “We are immensely proud of Murray and Erica who are both exemplary members of our alumni community of more than 100,000 graduates who are making a difference throughout Niagara, across Ontario and around the world.”

Brewster, who grew up in Welland and graduated from the college’s Broadcasting—Radio, Television, and Film program in 1985, is a multi-awarding winning journalist and senior defence reporter with CBC News.

Per his official CBC biography, Brewster has covered the Canadian military and foreign policy from Parliament Hill for over a decade. Among other assignments, he spent a total of 15 months on the ground covering the Afghan war for The Canadian Press. The experience resulted in The Savage War: The Untold Battles of Afghanistan (2011). He previously covered defence issues and politics for CP in Nova Scotia for 11 years and was bureau chief for Standard Broadcast News in Ottawa.

Brewster is known as one of Canada’s most impactful military journalists and his contributions to the field have been recognized by over a dozen prestigious national awards, including 14 national Radio and Television News Director Awards, two Atlantic Journalism Awards, the Ross Munro Award for defence writing, the prestigious Michener Award Certificate of Merit for public service in journalism, and a finalist citation in the prominent National Newspaper Awards.

In 2017, Brewster was recognized with Niagara College’s Distinguished Alumni Award.

Erica Williams, who currently resides in St. Catharines and graduated from the college’s Social Service Worker program in 2018, is the founder and operator of the non-profit organization Erica’s Embrace Social Services.

The organization provides necessary and otherwise overlooked support services for racialized individuals, gathering and distributing Black hair care and beauty products to women’s shelters across Southwestern Ontario. It is the only known service of its kind in the area.

Brewster and Williams are the seventh and eighth alumni, respectively, from Niagara College to win a Premier’s Award since the honour was introduced.

The Premier’s Award for college graduates was launched in 1992 to mark the 25th anniversary of Ontario’s college system. The province partners with Colleges Ontario to administer the awards.