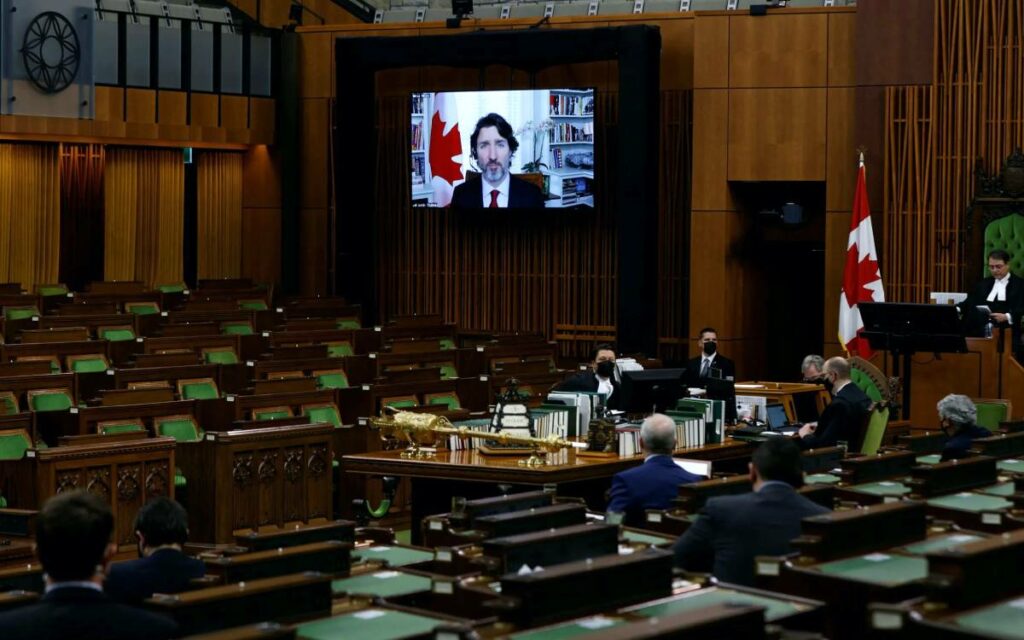 With snow on the ground and Parliament back in session, things are starting to feel normal again in Ottawa. MPs are busy passing legislation and debating each other, staff are frantically running around solving problems and political leaders are creating said problems.

Though when you look at the House of Commons, there are a few things missing, including a number of MPs. When the House returned in late November, it was full of 338 MPs, most of whom were eager to be there.

But after a few days of normal, old habits returned and there was a desire from the government to return to a hybrid model of Parliament. Meaning that MPs and ministers may participate in their parliamentary duties via Zoom, instead of being in Ottawa with their colleagues.

Like many things during the pandemic, the workplace has shifted and changed. Many businesses have moved to a hybrid or fully online model. But does that mean democracy should also shift online?

That is a question that was fiercely debated when MPs were determining if Parliament should remain in-person or move virtual. It was clear from the debate that the government believed they had support from the NDP and would win the issue once a vote was called.

They were correct: the NDP strongly supports this new form of Parliament. Whereas the Conservatives and Bloc are in favour of in-person.

There are benefits to a hybrid Parliament. It allows for more flexibility for MPs to be in their communities while still doing their parliamentary work. Not to mention, it allows for better work-life balance, something that is often missing for parliamentarians.

By not travelling to Ottawa weekly, an MP is able to connect with their community and hear the local issues. Then hop onto a Zoom call to express these concerns during question period or at committee.

However, those against a hybrid model argue that Parliament has always been exclusively in-person and maintain that the Liberals are using COVID-19 as an excuse to dodge accountability and undermine the work of the opposition. Parliamentarians are allotted a generous travel budget for a reason and being in Ottawa around their colleagues is important for democracy.

Not to mention that a number of MPs, including the prime minister, attended the COP26 summit last month with thousands of people from across the world to discuss the climate crisis. The opposition questioned: if MPs were able to attend this summit, why can’t they also attend Parliament?

Liberal House Leader Mark Holland argued that a number of MPs have expressed concern about being in Parliament with members who are unvaccinated and pointed towards the Conservatives, as they have not publicly disclosed how many of their MPs are fully inoculated against COVID-19. It’s important to note, the Board of Internal Economy, the governing body of MPs that oversees the operations of the House of Commons, requires all MPs to be vaccinated before being able to enter the House, or have an exemption reviewed by House of Commons staff.

The unique thing about Parliament is when the lights are on and cameras are rolling, the focus is not on what is best for democracy but political jabs at your opponents’ expense. But once the cameras are off, then the real work begins and there can be agreement on issues that go beyond party lines.

In Parliament, before or after any question period, you can see members of all parties chatting and discussing issues impacting their communities with each other. Often this is the best time to speak with a minister about consistency issues, since there is no staff member looking to whisk them off to their next meeting.

Anyone who’s attended a virtual convention or held a meeting over the past 22 months will know that there are constant issues. Whether that is self-inflicted, like being on mute when trying to speak, or more technical issues like an unstable internet connection. The challenges are ongoing.

Virtual Parliament also leads to distractions that take away from the issues being debated. In the last Parliament, a Québec MP was caught naked and then, a second time, urinating into a cup on camera. Last week, instead of focusing on pressing issues like the new variant or the flooding aftermath in BC, MPs debated if a bicycle is a prop and if it should be in the background of a minister’s feed or not.

The main benefit of a hybrid Parliament is clear: it’s convenient. But democracy and politics is not meant to be convenient or easy. It’s hard work, long hours and requires tough decisions. For this, politicians are paid accordingly and make over triple the amount of the average Canadian.

Sitting in the House of Commons as an MP is a privilege. MPs often talk about the first time they take their seat in the House and the feeling that it comes with. The sense of pride and duty quickly hits and sticks with them. This feeling is not something you feel on a Zoom call.

As a sense of normal begins to return, parliamentarians should do the same and return to their seats in Ottawa.