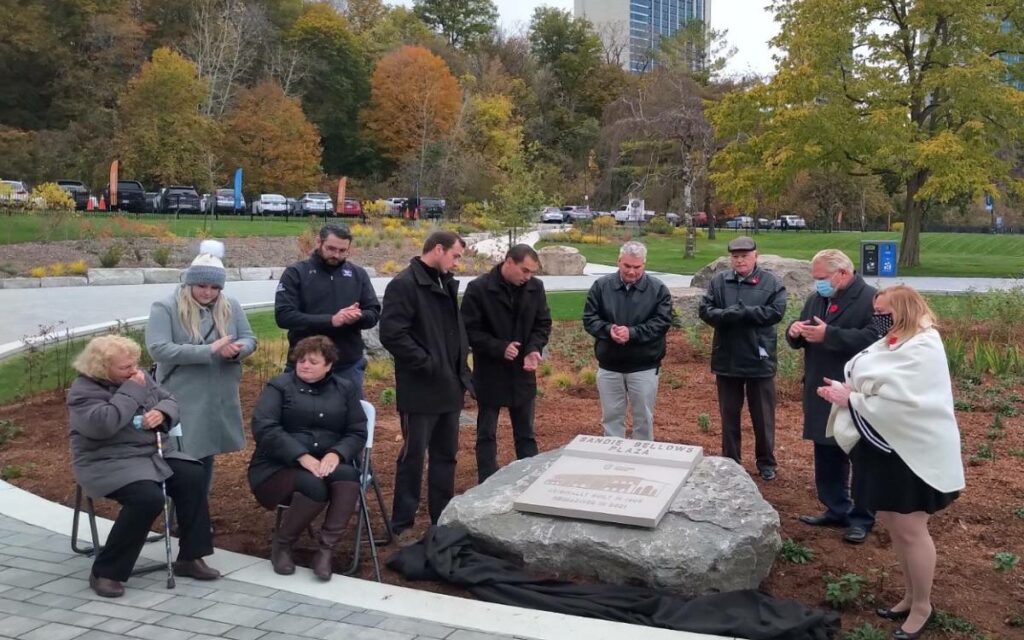 Premier Doug Ford and Minister Lisa MacLeod stand with friends and family of Sandie Bellows in a small ceremony at the Niagara Parks Power Station on Thursday, Nov. 4, 2021. Photo credit: The Niagara Independent

An active public citizen and lifelong resident of Niagara, Bellows passed away on Oct. 11, 2021, following a quiet, courageous battle with cancer. She was 60.

In his dedication, the premier formally renamed the outdoor space in front of the entrance to the power station the “Sandie Bellows Plaza”.

“Sandie’s many accomplishments as Niagara Parks Commission chair will live on, especially with every visitor that stops by to enjoy this beautiful power station facility,” said Premier Ford. “Sandie worked very hard to make this station into the one-of-a-kind, made-in-Ontario attraction that it is today. That’s why it’s only fitting that the outdoor plaza here at the power station be renamed in her honour.”

Appointed chair of the Niagara Parks in January 2019, Bellows was instrumental in making the agency’s newest, multi-million-dollar adaptive reuse power station a reality, helping craft the project from concept stage through to its grand opening in July of this year.

Under Bellows’ leadership, the Parks welcomed a record number of visitors and set a new benchmark for revenue during the 2019/2020 season. Bellows also guided the commission through the unprecedented impacts of the COVID-19 pandemic, while remaining focused on delivering key projects and building strong relationships with community stakeholders and partners.

“The Sandie Bellows Plaza is a fitting tribute to a woman who gave so much to the Niagara Region and restored the Niagara Parks Commission to the iconic agency it is today,” said Minister MacLeod. “Whether guiding the agency through the pandemic, restoring Table Rock or founding the Niagara Parks Power Station as the Chair of the Commission, Sandie left an impressive legacy that should not only be recognized but indeed, celebrated.”

MacLeod, who put her ministerial influence behind the power station idea from the start and helped Bellows secure the $25 million loan that made the project possible, told The Niagara Independent back in July that the station was “Sandie’s dream” and represented a “true legacy piece” for her “mentor and friend”.

“I cherished Sandie’s leadership and our working relationship but above all I am grateful to have counted her among my close friends,” MacLeod said on Thursday. “The Sandie Bellows Plaza will be a lasting reminder for generations to come of the trailblazing and inspiring community builder. Niagara and all of Ontario are left better because of her.” 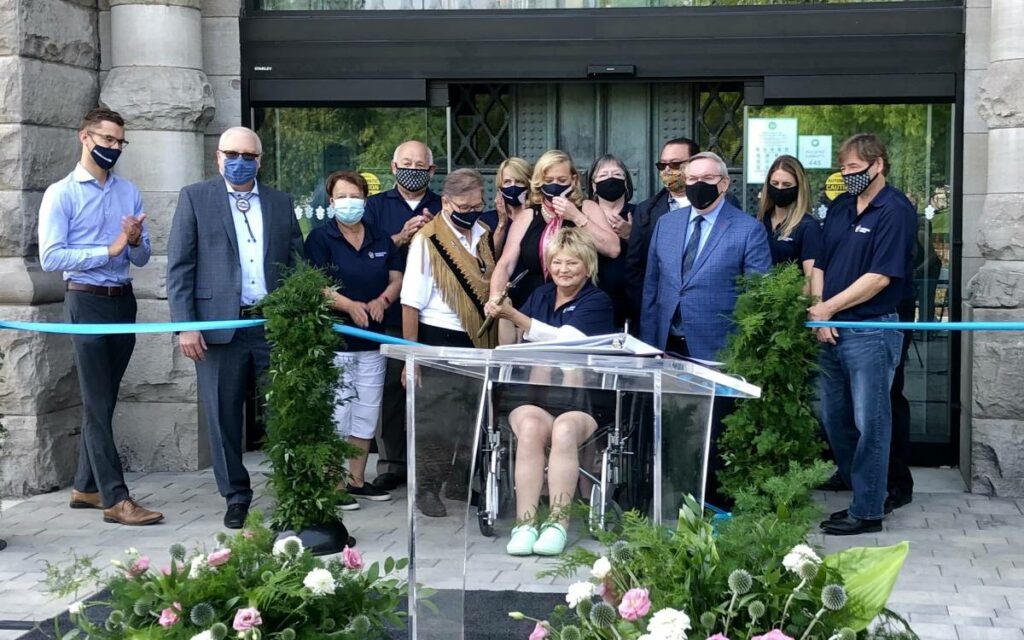 Sandie Bellows (seated in center) cuts the ceremonial ribbon at the grand opening of the Niagara Parks Power Station, July 28, 2021. The plaza out front of the attraction’s entrance is now named in her honour. Photo credit: The Niagara Independent

In addition to her work at the Parks, at the time of her passing Bellows was also a St. Catharines regional councillor and an active member of the board planning the next Canada Summer Games, set to take place in Niagara in August 2022.

“The positive impact Sandie had at Niagara Parks was felt right across the organization, from the Board level to our staff team. Her strength and talents in bringing people and ideas together played such a major role in the redevelopment of the Niagara Parks Power Station,” said Bellows’ friend and current vice-chair of the Parks April Jeffs, who was also in attendance Thursday.

“This dedication is a fitting tribute to ensure that her legacy lives on both in the plaza that now bears her name, but also in the Niagara Parks Power Station itself, which was one of Sandie’s biggest points of pride.”

In her career before public life, Bellows worked as a senior executive with Telus and general manager for CNN Staffing Solutions. During her tenure at Telus, she was a member of the Presidents Club, excelling in top sales for Canada.

Following a horrific incident in 1990, Bellows became an outspoken women’s rights advocate and used her experience as a survivor to better the lives of countless victims. In recognition of her advocacy work, Bellows was invited by Prime Minister Stephen Harper to the Victims Bill of Rights ceremony in 2015.

Bellows is survived by her two sons, Spencer and Colton. 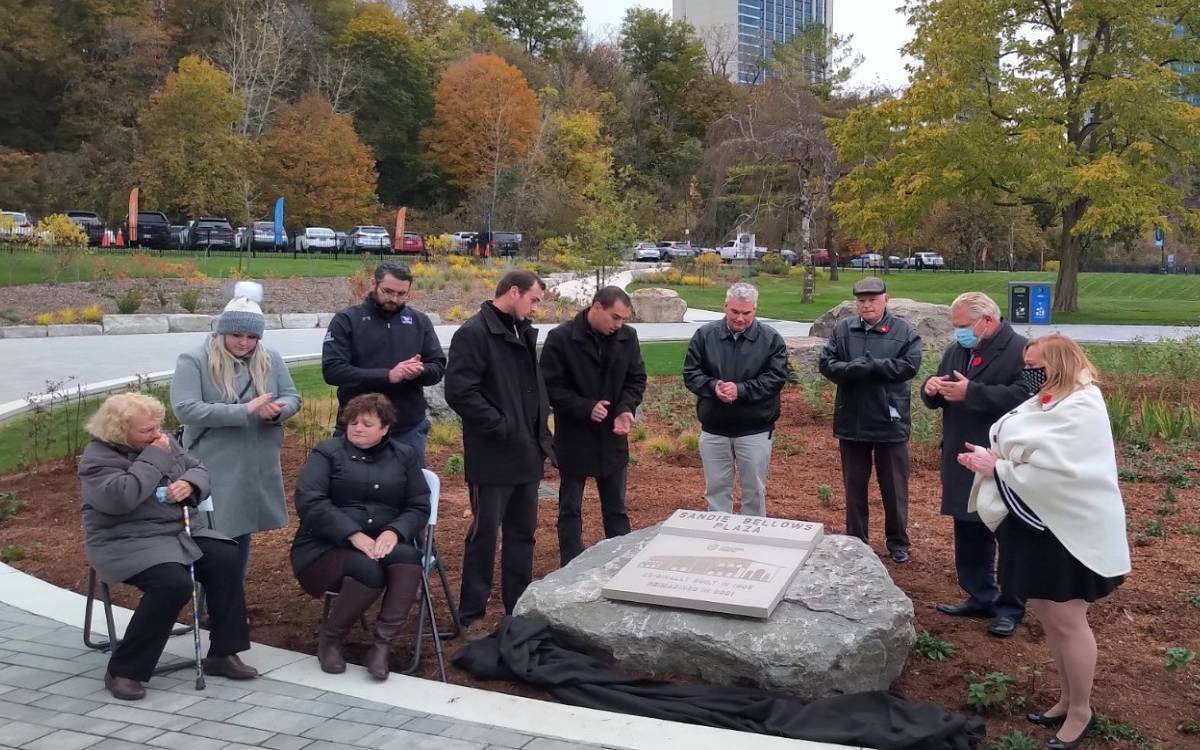