Plenty of lessons for Republicans to learn from midterm elections 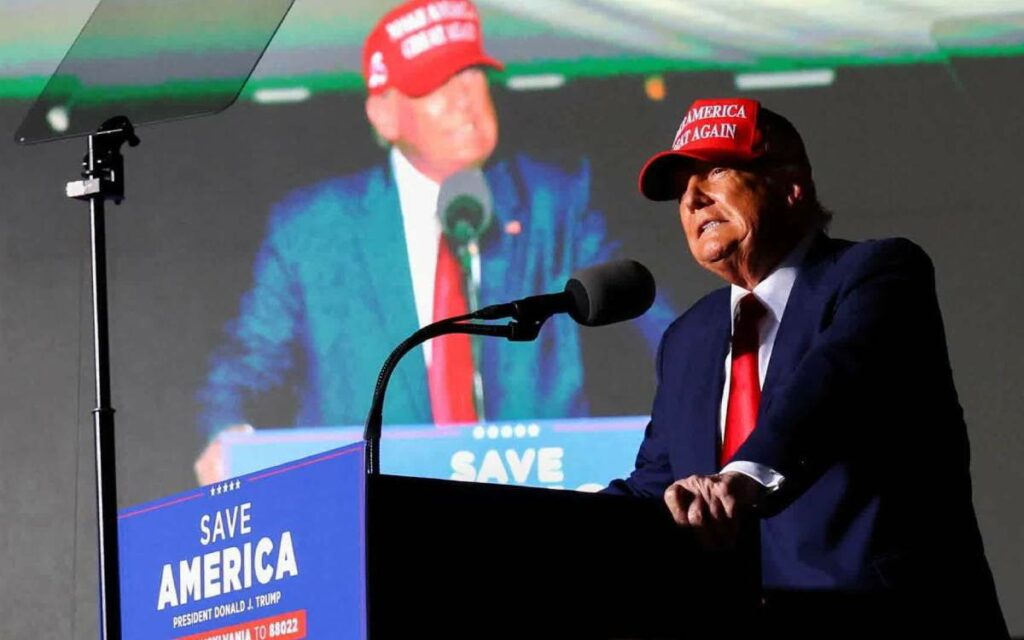 Not least of which is that the party must, sooner than later, rid itself of the albatross around its neck that is former president Donald Trump. Photo credit: Reuters/Mike Segar

Last Tuesday evening, the Republican Party, expecting a wave of successful candidates to sweep them into power across America, instead experienced a red trickle, barely giving them control of the House of Representatives and leaving the Senate undecided.

Make no mistake about it, this mid-term election result leaves most Republicans disappointed and angry. There are a few things to take from these contests, beginning with the basic facts and then the natural question: why did this happen and where do Republicans go from here?

Analyzing what took place thus far starts with acknowledging that it appears the Republicans will have enough seats to replace Speaker Nancy Pelosi with one of their own, but that majority in the House looks to be very thin, as close as just two or three votes. In the Senate, a run-off election to be held December 6 in Georgia will determine who is in the majority and who determines committee chairs and memberships.

Republicans held enough governorships to maintain a majority there, but lost Maryland and Massachusetts, two states normally associated with liberal leadership, but losses nonetheless. As one might conclude, for a mid-term election in the midst of increasing concerns about inflation, recession, immigration, and crime, the Democratic Party kept losses to a minimum and fared not too badly considering the average loss of seats in a president’s first mid-term hovers around 26 seats.

Many commentators theorized today about why things unfolded as they did. One thing is abundantly clear, the only place in the nation where a Red Tsunami overtook events turned out to be in Florida. Governor Ron DeSantis, whose career in politics Donald Trump claims to have authored, changed a 30,000-vote victory in 2018 to an unprecedented drubbing of his opponent, former Governor Charlie Crist, scoring almost 60 per cent of the vote.

DeSantis’ victory bled into every part of the state, bringing him an outright victory among Hispanics, winning liberal areas like Miami-Dade County, and ultimately ensuring the election of Republicans throughout state offices and even into more local positions. DeSantis won 62 of Florida’s 67 counties and stood alone as the hero of GOP successes on Tuesday. So why could this not translate into more victories for Republicans in other jurisdictions? Poor candidates, a fixation on tired issues, and the looming presence of the former president.

In Pennsylvania, Georgia, Arizona, and New Hampshire the GOP had candidates running who were less than credible, but it did not need to be that way. Donald Trump, obsessed about 2020 and a stolen election, weighed in heavily on the Senate candidates in these states, three of whom have lost, while a fourth enters a run-off trailing his opponent. Trump liked most of them because of celebrity or their similar views about the 2020 election being stolen. As candidates they proved to be short on substance, lacking authenticity, and surprisingly weak on the stump.

If the party had selected these candidate’s opponents in the primary races, it would not have been surprising to see the GOP win all four of these races. Unfortunately, a significant number of Republican voters remain loyal to the former president and hang on his every word, regardless of how trite, hollow, self-serving, or dishonest it becomes.

One only need listen to Trump himself after the election on Truth Social, blaming candidates for their poor performance, failing to bend their knee to him, and once again suggesting that when candidates don’t stick to the stolen election message, this explains their loss: “Don Bolduc (Republican Senate candidate in New Hampshire) was a very nice guy, but he lost tonight when he disavowed after his big primary win his long standing stance on election fraud in the 2020 presidential primary. Had he stayed strong and true he would have won easily. Lessons learned.”

So, Donald Trump believes Don Bolduc needed to make the election in New Hampshire about the theft of the 2020 presidential election? Funny, but Republican Governor Chris Sununu, not a Trump loyalist, ran away to victory, winning a decisive contest to capture a second term avoiding the issue like the plague. Across the country this story repeated itself as Democrats held onto seats a more traditional Republican candidate would have won.

Pennsylvania provides another perfect example where Mehmet Oz of television doctor fame fell to a very flawed Democratic candidate. Whether Herschel Walker can win the runoff in Georgia remains to be seen, but a candidate as vulnerable as Raphael Warnock should have been defeated. Even Governor Brian Kemp (R) who defeated liberal hero Stacy Abrams(D) by some nine points could not push Walker over the top. The same story held true in the governorships, leaving Republicans with a very clear choice as 2024 nears.

About one-third of the nation adores Donald Trump, maybe 45 per cent find him tolerable, but a majority will never vote for the man again, if they ever did. If Republicans liked what they saw in Florida – a massive and widespread victory, the addressing of issues head on from a conservative point of view, a serious presentation of competent government – then the transition from Trump to DeSantis needs to take place sooner rather than later.

The former president has huffed and puffed already about DeSantis getting into the race, but it seems inevitable now that the two men will face off, with there likely being others joining in. Trump may hold some preference at present, but GOP supporters face the prospect of another Trump loss, adding to his oversight of three consecutive losing cycles (2018, 2020, 2022) or selecting a winner in Ron DeSantis who has turned a purple state solid Red and is more than ready to take the stage as the next Republican presidential nominee.

In the children’s Christmas classic, Santa Claus is Coming to Town (1970), when the ruling Meisterburger clan of Sombretown finally fades from leadership, the narrator says the townspeople “…realized how silly the Meisterburgers…always were…well everybody had a wonderful laugh and forgot all about them.”

That may be Trump’s destiny if he chooses to continue down this sorrowful road of recrimination, but especially so if he decides to engage the potent leadership of Florida’s governor and the winning discipline of principled leadership, ethics and integrity he brings every day. Republicans who do not heed the lessons of the 2022 election will deserve the outcome they reap in 2024.