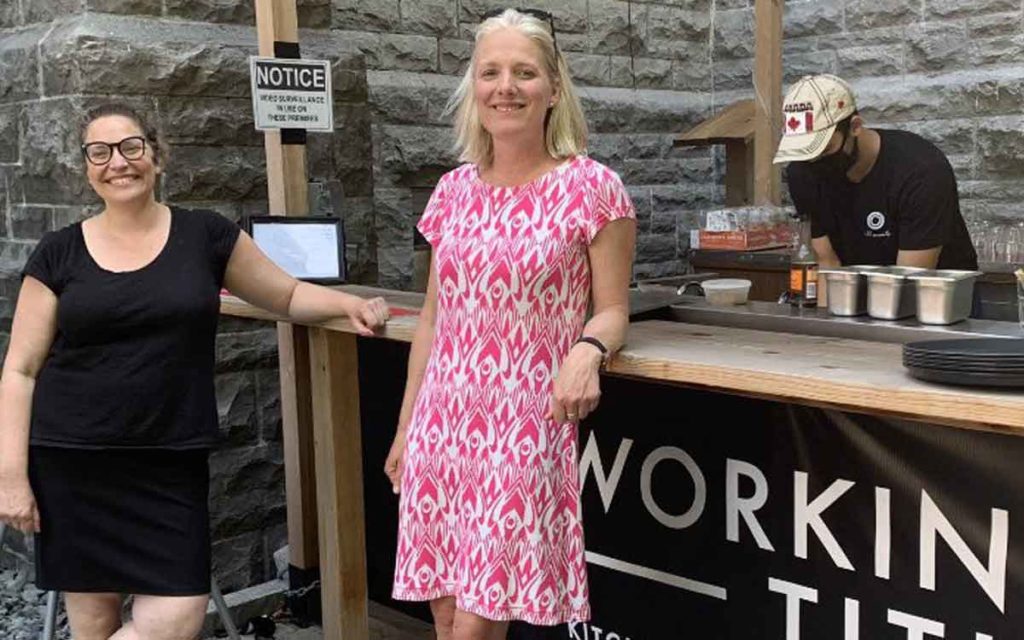 Liberal MP Catherine McKenna who has tweeted out “Be a winner. Wear a mask.” was recently photographed not wearing a mask in public and while in in-person meetings. Just one of many politicians being caught in “gotcha” moments as the COVID-19 pandemic turns political.

It’s been a hotly debated topic for the past several weeks; to wear a mask or not to wear a mask? While public health experts initially flipped-flopped on whether or not wearing a mask actually did much to prevent the spread of COVID-19, most have now landed on the general consensus that indeed wearing a mask is beneficial, especially in closed areas where proper social distancing is tough to do. If one needed further proof, even U.S. President Donald Trump was seen wearing a mask late last week.

To date neither the federal nor any of the provincial governments have passed a mandatory mask bylaw.

The debate, like most things in today’s society, has quickly turned political. In addition to municipal politicians in Niagara and elsewhere around the province holding special council meetings to discuss whether or not a mandatory mask bylaw should be passed, a series of “gotcha” style news articles and social media posts have become the norm.

Locally, Niagara Falls Mayor Jim Diodati has twice now been the target. Diodati attended two separate events in his capacity as mayor. One was to celebrate a religious holiday and the other the opening of a new business. Both times someone attending the events snapped a photo of the mayor not wearing a mask and posted it on social media claiming the mayor was setting a bad example. Social media was abuzz with residents critical of the mayor as well as many people defending him. There were also two stories written about the incident in local newspapers. The mayor said the photos were taken out of context as he only removed his mask briefly to say his remarks.

St. Catharines city councillor and vocal advocate of mask wearing, Karrie Porter came to Diodati’s defence on Twitter saying, “I am an obsessive mask wearer and I am a pusher of mask bylaws, but I feel deeply uncomfortable about vigilante mask enforcement and these gotcha moments. I don’t think this helps.” In fact, Porter’s council colleagues Mat Siscoe and Greg Miller were both seen recently in a photo on social media standing less than two meters apart not wearing masks while on the patio of a downtown St. Catharines restaurant. There was no news coverage saying how the two councillors were setting a bad example like there was in the Diodati incidents. 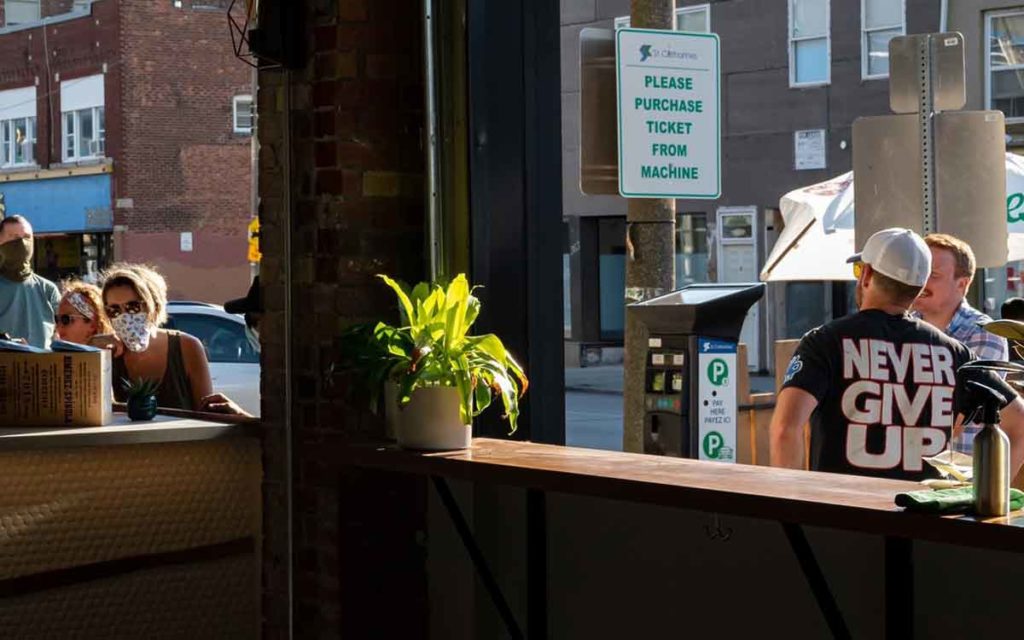 St. Catharines city councillors Greg Miller and Mat Siscoe chatting outside a local restaurant on July 4. Both without masks, standing within 6 feet of one another, and relatively close to others.  Twitter

The constant “let’s see who we can catch not wearing a mask” phenomena has of course extended into the provincial and federal political world as partisan citizens take and post on social media, photos of politicians they don’t like, not wearing a mask. Recently Conservative leader Andrew Scheer was one target. Scheer, along with Manitoba Premier Brian Pallister, was “caught” without a mask while at Toronto’s Pearson Airport on July 7. Liberal and NDP supporters quickly took to social media condemning the two politicians for their bad behaviour. However, within hours, Conservative supporters blanketed social media with photos of Liberals also not donning protective face coverings in public places. Liberal MP Catherine McKenna, who has tweeted out “Be a winner. Wear a mask.”, was recently photographed, on more than one occasion, not wearing a mask in public and while in in-person meetings. 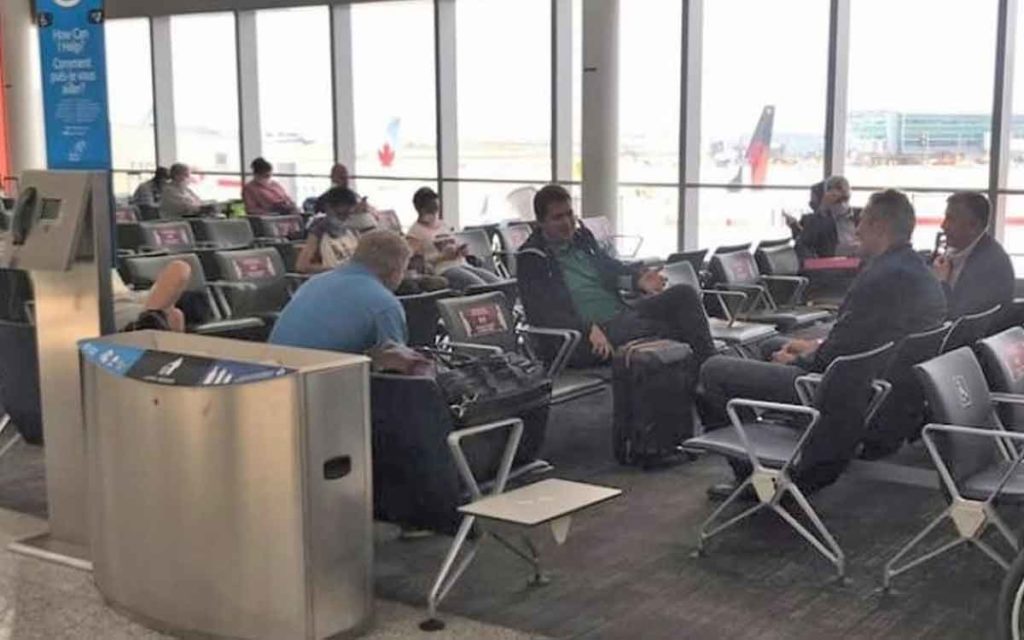 Leader of the Opposition Andrew Scheer and Manitoba Premier Brian Pallister are caught without masks while at Toronto’s Pearson Airport on July 7.

Also, Liberal cabinet minister Ahmed Hussen stood shoulder-to-shoulder with Prime Minister Trudeau, amongst thousands of people at the Black Lives Matter protest on Parliament Hill on June 5 initially not wearing a mask. He eventually put one on after an observant staffer tapped him on the shoulder and seemingly gave the MP a bit of good PR advice. 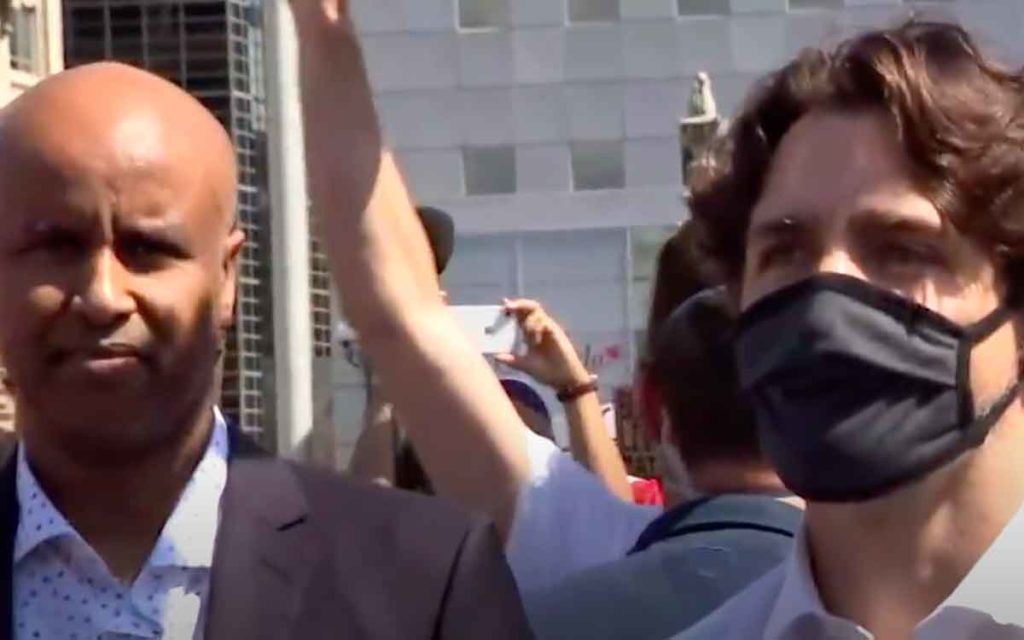 Liberal cabinet minister Ahmed Hussen stands amid thousands of fellow rally attendees at the Black Lives Matter protest on Parliament Hill, June 5. (Hussen eventually did don a mask, after an observant staffer tapped him on the shoulder and seemingly gave the MP a bit of good PR advice). YouTube

Meanwhile, Conservative MP for Port Moody-Coquitlam Nelly Shin was seen passing out masks to seniors on June 25, herself not wearing a mask.

Of course the elected officials of the NDP have not been immune to the citizen mask police. NDP MP for Winnipeg Centre Leah Gazan was photographed standing with activist Ellen Gabriel, former NDP MP for Abitibi—Baie-James—Nunavik—Eeyou Romeo Saganash, and NDP leader Jagmeet Singh at a ceremony on July 11 commemorating the Oka Crisis. The group is closely bunched together, and while masks are present, the only one actually covering their face properly was Singh. 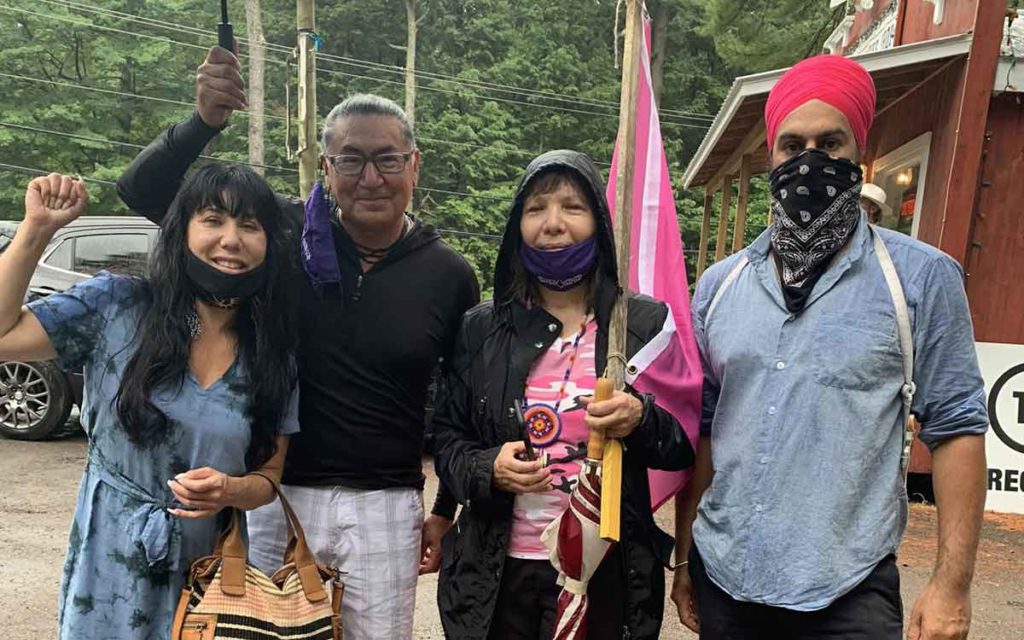 NDP MP for Winnipeg Centre Leah Gazan stands with activist Ellen Gabriel, former NDP MP for Abitibi—Baie-James—Nunavik—Eeyou Romeo Saganash, and NDP leader Jagmeet Singh at a ceremony on July 11 commemorating the Oka Crisis. The group is closely bunched together, and while masks are present, the only one actually covering their face properly is Singh. Twitter

While politicians at all levels were originally touting the “we’re all in this together” mantra, clearly COVID-19 has turned into a political pandemic with citizens and journalists chasing down politicians to capture that split second when they aren’t wearing a mask in order to publicly shame them and score cheap political points or sell newspapers.  There’s no doubt elected officials at all levels and of all political stripes want the COVID-19 pandemic to end as quickly as the citizens they represent. Focusing on what matters and doing what public health officials recommend whenever possible is what will make that happen.

Former journalist and now political staffer Jacquie Budden summed it up best with a simple Tweet: “If you’re sincerely more concerned or sincerely think we should be more concerned about Andrew Scheer not wearing a mask than you are about the bottomless pit of debt Justin Trudeau has sunk us into, you truly have your head up either your own… or JT’s….” 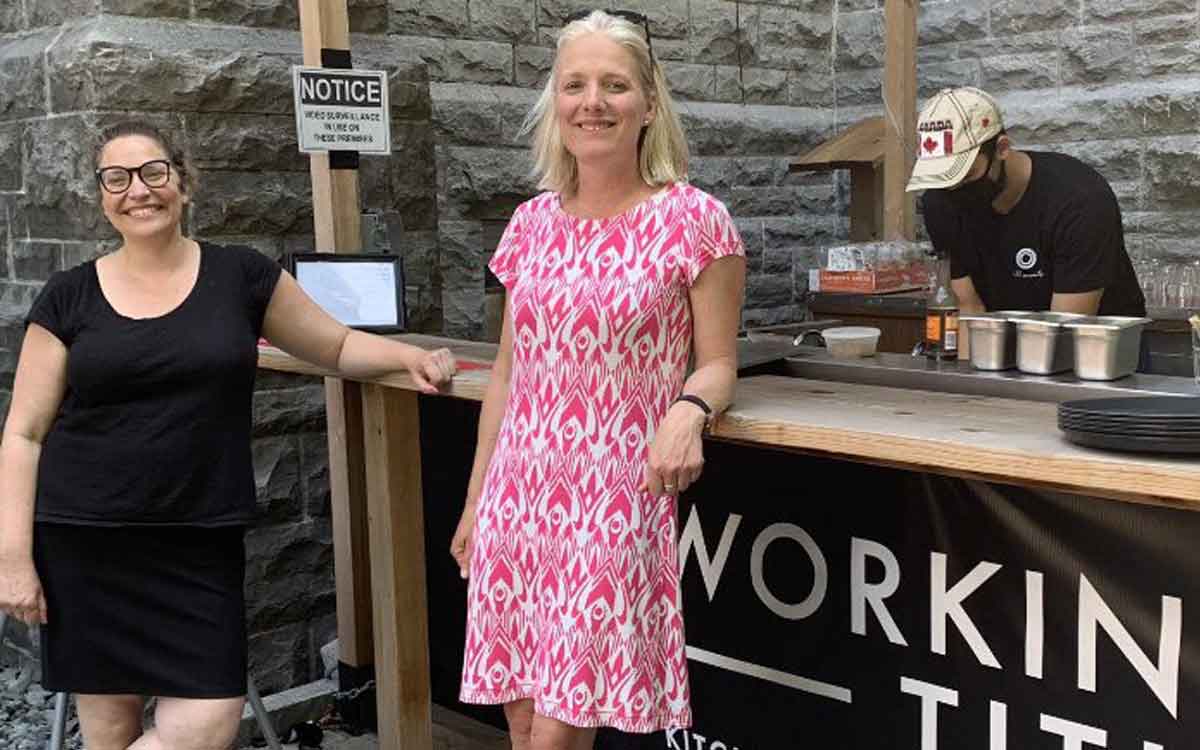