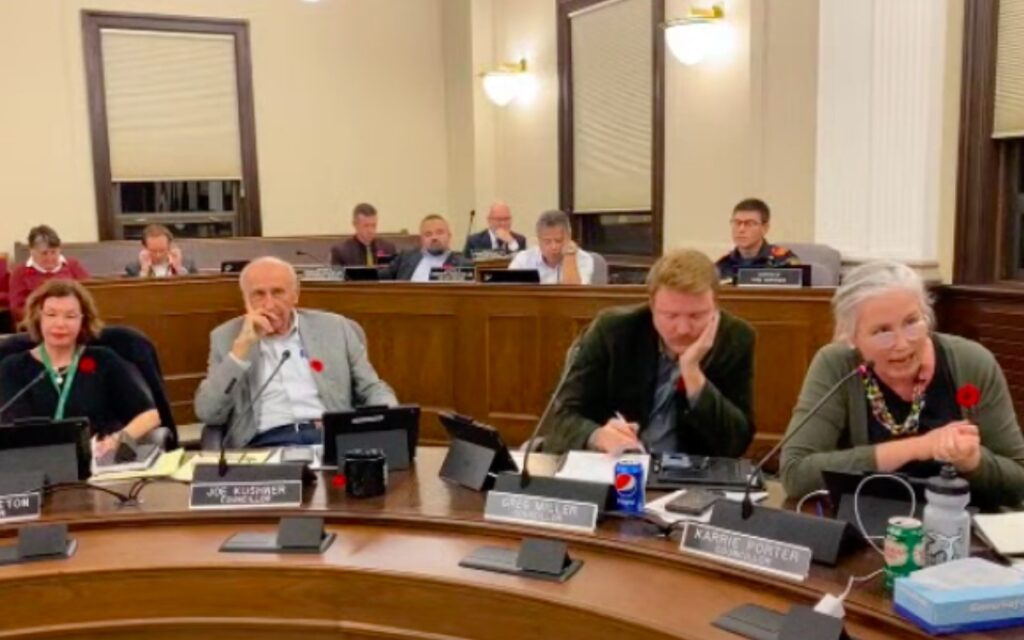 St. Catharines City Council held its final regular meeting of the 2018-2022 term on Monday. Members narrowly passed a motion to once again display the nativity scene featuring baby Jesus outside of city hall this year, following a two-year hiatus. One of the more vocal opponents of the scene’s reinstitution was outgoing councillor Karrie Porter (pictured far right, speaking), who a few days after the meeting took to Twitter to further share her feelings about the situation. Photo credit: YouTube/City of St. Catharines

After two years of keeping the city’s nativity scene moth-balled during the Christmas season in an ostensible attempt to be “respectful of all faiths”, earlier this week St. Catharines City Council voted to reinstitute baby Jesus, Mother Mary, and Joseph on the lawn outside city hall this year.

Councillors heard from a handful of delegates for and against the manger scene and debated the issue for the better part of an hour Monday night before voting 6-5 on a motion to put the creche back where it’s been displayed without issue since 1965.

The motion, introduced by Councillor Joe Kushner, extends permission to use the property for holiday displays to all religious groups and is intended to be “inclusive” of all faith communities.

As Councillor Kushner said Monday night, instead of just excluding particular displays like the nativity scene, “let’s celebrate our differences in order to understand one another better.”

Not everyone agreed, however. Councillors Karrie Porter, Greg Miller, and Lori Littleton all spoke out against putting the nativity scene back out front of city hall.

Porter, who chose not to run for re-election in October after a single term on council, said she “loved” nativity scenes but that “Jesus wouldn’t care about this issue” and would instead be concerned about “justice” regarding provincial social assistance rates.

“I’m honestly offended that this has gotten so much (sic) – I’m upset that this is at my last council meeting,” a red-faced, frustrated Porter said. “Some of you think that this would be nice. I actually think it’s quite terrible. It’s not justice. I don’t think Jesus would care about this issue.”

Porter didn’t just take offence to the idea of displaying a nativity scene outside of city hall either, she also took issue with the city’s display itself.

As Porter mentioned at council and reiterated further in a Twitter thread Wednesday, to the outgoing councillor the physical appearance of Jesus, Mary, and Joseph in the St. Catharines nativity scene is “problematic”.

“…the family in this set is VERY white. The baby Jesus in our nativity scene looks like a baby (Councillor Greg Miller, who has red hair) & Mary looks like his Mom”, Porter wrote.

“Miller already has a god-complex, and although Greg’s mother is saint-like, the real holy mother Miryam was a Jewish woman from Al-Nasra. She didn’t look like a red-headed lass from the Scottish highlands. The holy family had dark skin.”

Porter appeared on 900 CHML’s Good Morning Hamilton Thursday to further discuss the issue, reiterating a number of the points she made in council and on social media.